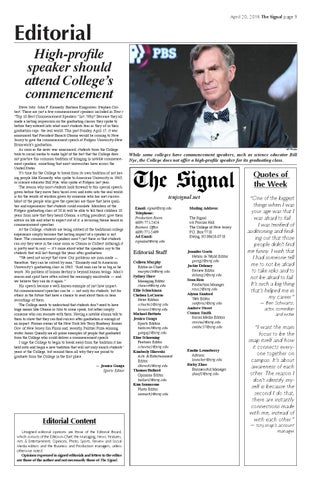 Steve Jobs. John F. Kennedy. Barbara Kingsolver. Stephen Colbert. These are just a few commencement speakers included in Time’s “Top 10 Best Commencement Speakers” list. Why? Because they all made a lasting impression on the graduating classes they spoke to before they entered into what most students fear as they sit in their graduation caps: the real world. This past Sunday, April 17, it was announced that President Barack Obama would be coming to New Jersey to give the commencement speech at Rutgers University-New Brunswick’s graduation. As soon as the news was announced, students from the College took to social media to make light of the fact that the College does not practice this common tradition of bringing in notable commencement speakers, something that most universities have across the United States. It’s time for the College to break from its own tradition of not having people like Kennedy, who spoke to American University in 1963, or science educator Bill Nye, who spoke at Rutgers last year. The reason why most students look forward to this special speech given before they move their tassel over and enter into the real world is for the words of wisdom given by someone who has met success. Most of the people who give the speeches are those that have qualities and experiences that students could emulate. Members of the Rutgers graduating class of 2016 will be able to tell their children 10 years from now that they heard Obama, a sitting president, give them advice on life and what to expect out of it, a recurring theme heard in commencement speeches. At the College, students are being robbed of the traditional college experience simply because that lasting impact of a speaker is not there. The commencement speakers aren’t just there so that students can say they were in the same room as Obama or Colbert (although it is pretty neat to say) — it’s more about what the speakers say to the students that will last through the years after graduation. “We need not accept that view. Our problems are man-made — therefore, they can be solved by man,” Kennedy said to American University’s graduating class in 1963. “And man can be as big as he wants. No problem of human destiny is beyond human beings. Man’s reason and spirit have often solved the seemingly unsolvable — and we believe they can do it again.” His speech became a well-known example of just how impactful commencement speeches can be — not only for students, but for others in the future that have a chance to read about them or hear recordings of them. The College needs to understand that students don’t need to have huge names like Obama or Jobs to come speak, but rather simply someone who can resonate with them. Having a notable alumni talk to them to show that they can find success after graduation is enough of an impact. Former owner of the New York Jets Terry Bradway, former Gov. of New Jersey Jim Florio and, recently, Pulitzer Prize-winning writer James Queally are all prime examples of people that graduated from the College who could deliver a commencement speech. I urge the College to begin to break away from the tradition it has held onto and begin a new tradition that will not only enrich students’ years at the College, but remind them all why they are proud to graduate from the College in the first place. — Jessica Ganga Sports Editor

Editorial Content Unsigned editorial opinions are those of the Editorial Board, which consists of the Editor-in-Chief, the Managing, News, Features, Arts & Entertainment, Opinions, Photo, Sports, Review and Social Media editors and the Business and Production managers, unless otherwise noted. Opinions expressed in signed editorials and letters to the editor are those of the author and not necessarily those of The Signal.

While some colleges have commencement speakers, such as science educator Bill Nye, the College does not offer a high-profile speaker for its graduating class.

“I want the main focus to be the snap itself and how it connects everyone together on campus. It’s about awareness of each other. The reason I don’t identify myself is because the second I do that, there are instantly connections made with me, instead of with each other.” — tcnj.snap’s account manager The 4/20/16 issue of The Signal, The College of New Jersey's student newspaper.

The 4/20/16 issue of The Signal, The College of New Jersey's student newspaper.