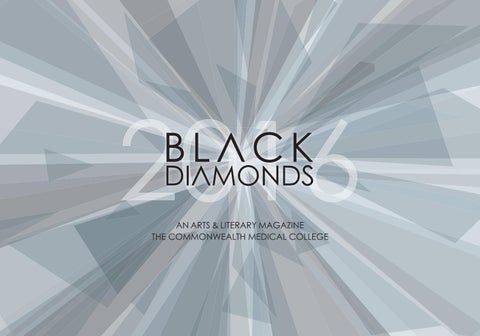 The Dr. and Mrs. Gino and Jean Cavalieri Mori Scholarship

hysicians often say, “medicine is both an art and a science”, but unfortunately, the expression is frequently used to mean that when we don’t have evidence to support us, we rely on our intuition. That really isn’t art. Rather, it is a lack of science! Medicine does include elements of both the performing and creative arts; and a mixture of knowledge, skills, and the ability to communicate are essential to performing well. Most physicians are just “being themselves” while seeing patients without realizing that they need to be performing for, and with, the patient. Much of what occurs in patient encounters requires careful listening and improvisation, important components of arts such as jazz, theater, and improv.

of the songs to be played. They also learn “riffs” which sound like improvisations but are closer to being scripts. With some memorized riffs, the jazz musician can take off on a solo improvisation and return when it is time to rejoin the ensemble. When it comes to patient interactions, we frequently have to modify our line of questioning based on what the patient tells us, in other words, we “modulate” our responses situationally, rather than adhering strictly to a predefined “script”.

Dame Judi Dench advises actors to think about the motivation behind their characters’ words, rather than simply memorizing scripts. This advice also applies to the practice of medicine. Active listening starts with hearing what the other players or persons say, putting it into context, and then engaging with them to build positively on what they have done or said.

Unlike actors and singers who have coaches to guide them as they aim to perfect their performance, we generally don’t receive “coaching”, once we have completed our medical training. We can seek out coaches, though, as Atul Gawande, MD did. He writes in the New Yorker magazine about his decision to get a coach after he realized that his surgical skills had reached a plateau1. A retired surgeon agreed to observe Gawande in the operating room and provide feedback on his performance. Gawande notes that after taking on a coach, his surgical complication rates decreased. While this may have been coincidental, he felt the impact was real.

When jazz musicians get together to “jam”, they need to have a knowledge base, which usually means knowing the harmonic progressions

Audiences provide important feedback for performers. The performers tend to know when the performance is going well and do

not necessarily have to wait for the applause. While we in health care may receive “instant feedback” when a patient interaction isn’t going well, we generally do not solicit feedback from our patients. Even when we do, we may not get honest feedback because there is a power differential between us and our patients, who may fear retribution if they give anything less than positive feedback. How do we achieve the technical and communications skills needed to achieve the standards of professional performing artists? Many people who enter medicine have had some experience in the traditional performing arts as actors or musicians; but we have not necessarily applied the lessons from other performing arts to medicine. Furthermore, our approach to performance in medicine does not meet the standards of professional performing artists. World-class performers spend thousands of hours practicing, but practicing alone isn’t enough. What is required is deliberate practice, a form of training that consists of “focused, grueling, repetitive practice, in which the subject continuously monitors his or her performance, and subsequently corrects, experiments, and

a day in the life Brianna shinN md class of 2016

[6a] Wake up in a new exciting city! [7a] Get to the hospital and begin to pre-round on your patients while trying not to get lost in an unfamiliar hospital. [8a] Meet with the residents and fellows and round ... again. [9-10a] Meet with the attending doctor and round ... AGAIN. [11a] Head to morning report led by the chief residents. [12p] Go grab lunch quickly and then run to noon conference . [1-3p] After leaving noon conference inspired and overwhelmed by the amount of information you DON’T know, go try to take care of all the orders your team decided on during morning rounds. [3p] Review a topic with the residents and have flashbacks to anatomy and physiology class. [345p] Get a text from another medical student saying there’s free food in the resident lounge. [346p] Walk briskly to the lounge to get the free food (Advice to aspiring medical students: NEVER pass up free food!). [4p] Round one final time to make sure your patients are “tucked in” before you head out for the night. [5p] Leave the hospital and face the daily dilemma of whether to go to the gym or not. [530p] Head to the gym after you convinced yourself that you need to practice what you preach. [7p] Feeling invigorated after the gym and full of endorphins, go eat a good dinner. [8p] Read up on something you didn’t know or understand from earlier in the day/prepare a topic to present to the team tomorrow. [9p] Relax and watch some TV or read something not related to medicine! [11p] Head to bed because the thought of your alarm going off in 7 hours makes you start to yawn ...and then REPEAT x 29 days. The 2016 edition of Black Diamonds is supported by the leadership of the Academy of Clinical Educators in grateful recognition of the dedica...

The 2016 edition of Black Diamonds is supported by the leadership of the Academy of Clinical Educators in grateful recognition of the dedica...