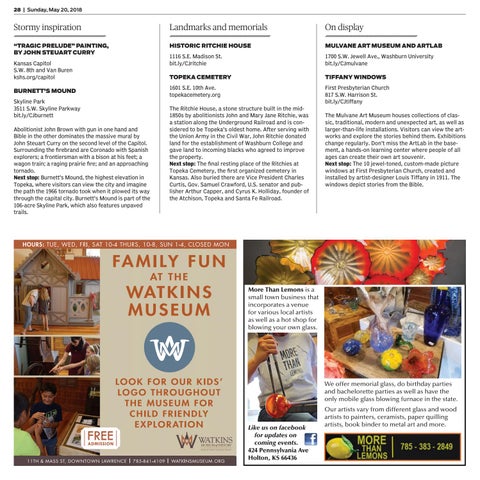 BURNETT’S MOUND Skyline Park 3511 S.W. Skyline Parkway bit.ly/CJburnett Abolitionist John Brown with gun in one hand and Bible in the other dominates the massive mural by John Steuart Curry on the second level of the Capitol. Surrounding the firebrand are Coronado with Spanish explorers; a frontiersman with a bison at his feet; a wagon train; a raging prairie fire; and an approaching tornado. Next stop: Burnett’s Mound, the highest elevation in Topeka, where visitors can view the city and imagine the path the 1966 tornado took when it plowed its way through the capital city. Burnett’s Mound is part of the 106-acre Skyline Park, which also features unpaved trails.

The Ritchie House, a stone structure built in the mid1850s by abolitionists John and Mary Jane Ritchie, was a station along the Underground Railroad and is considered to be Topeka’s oldest home. After serving with the Union Army in the Civil War, John Ritchie donated land for the establishment of Washburn College and gave land to incoming blacks who agreed to improve the property. Next stop: The final resting place of the Ritchies at Topeka Cemetery, the first organized cemetery in Kansas. Also buried there are Vice President Charles Curtis, Gov. Samuel Crawford, U.S. senator and publisher Arthur Capper, and Cyrus K. Holliday, founder of the Atchison, Topeka and Santa Fe Railroad.

The Mulvane Art Museum houses collections of classic, traditional, modern and unexpected art, as well as larger-than-life installations. Visitors can view the artworks and explore the stories behind them. Exhibitions change regularly. Don’t miss the ArtLab in the basement, a hands-on learning center where people of all ages can create their own art souvenir. Next stop: The 10 jewel-toned, custom-made picture windows at First Presbyterian Church, created and installed by artist-designer Louis Tiffany in 1911. The windows depict stories from the Bible. 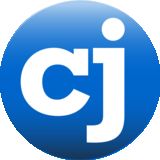 Find new and exciting places to visit in Northeast Kansas and beyond in our 2018 travel special section.

Find new and exciting places to visit in Northeast Kansas and beyond in our 2018 travel special section.