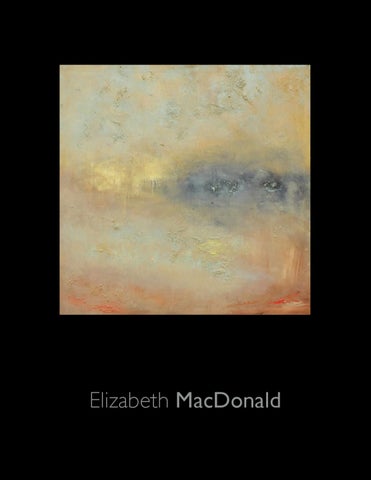 Elizabeth MacDonald is an architect in clay, building worlds both vast and ancient. She

creates deep space in small squares and evokes a palpable sense of the accumulated layers of time in richly textured surfaces. The Turneresque landscapes that emerge from her earthy palette feel familiar and at the same time mysterious. This new work grew out of the artistâ&#x20AC;&#x2122;s journeys in northern and northwestern India last winter. Traveling in Agra, home of the Taj Mahal, and the Rajasthan towns of Mandawa, Jodhpur and Rankapur, MacDonald was fascinated by the encrusted surfaces of village walls, suggesting centuries of interplay between mankind and nature. Inspired, she began this new series with the media she has worked with for four decades, creating rich surfaces with ceramic powders on clay. In the studio, her vision expanded to produce larger images, sensuous and complex paintings with fluid washes of acrylic and oil. Transparent glazes float clouds of misty color over layers of deep impasto, aged with the fine pattern of crazing found in a parched field or the finish on an old ceramic jar. There is an admirable ambiguity of scale in this work. The images are intimate, absorbing the contemplative viewer. At the same time, there is an unmistakable aura of great distance and time captured in each square. In her earlier work, MacDonald mastered the use of mosaic for sculpture that was at home in architecture. Her large constructions, made up of tiles of subtly colored ceramic, have been commissioned for buildings throughout the country and around the world and have taken form as free-standing structures in their own right. She has used the grid that supported the mosaics of the earlier sculptures to provide a monumental context for the larger, wall-hung works in the new series. With this group, MacDonald presents a world distilled in space and time, conveyed with a reassuring measure of wisdom and experience.

For many years I have looked at the stained surfaces on old walls. I find in them a history of time and place – layer upon layer created by man and eroded by weather. A record of time is reflected on these walls – always changing – always evolving. With my camera, I love to capture a moment of color and texture, which to me is always beautiful. Ever since a trip to China in the 80s, I have wanted to record these layers of history; and now, after a trip to India, I have worked on images inspired by my photographs of the walls in Rajasthan. Leonardo da Vinci, in his “Treatise on Painting” wrote “if you cast your glance on any walls dirty with such stains… you will be able to discover… myriad things which you can transform into a complete and proper form… it would not be too much of an effort to pause sometimes to look into these stains on walls.”