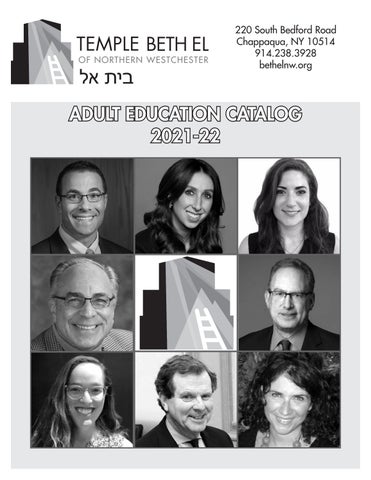 FEATURED SERIES: EXPLORING PERSPECTIVES ON ISRAEL Listening to the Wide Spectrum of American Jewish Thought on Israel The response to the eruption of violence in Israel and Gaza in May of 2021 revealed a changing perspective on the part of younger American Jews regarding the Jewish State and its relationship with the Palestinian people. In order to fully understand this shift, we are inviting thought leaders representing varying views as expressed by younger American Jews. We invite you to join us in listening, confronting and wrestling with divergent opinions as we consider the relationship between Israel and American Jewry.

Jonathan Kessler, Founder/CEO Heart of a Nation Sunday, October 17, 9:15–10:30 am Beit Midrash with live Zoom option Jonathan Kessler is the founder and CEO of Heart of a Nation, a non-profit aimed towards bringing together progressives of all faiths and backgrounds to form an intentional Community of Purpose that is committed to the ambitious task of making Israel and America better countries. As the progressive impulses in Israeli and American societies are challenged by darker forces, American progressives are drifting away from Israel and Israeli politics is just a shadow of its progressive roots. The acceleration of these trends will harm both countries, as well as advancements toward equality, justice, and peace. For these reasons, uniting in common purpose the progressive communities in the U.S., Israel, and Palestine is more urgent than ever.

Shifra Sered, J Street Regional Director, Tri-State &amp; PA Region Sunday, November 21, 9:00–10:15 am Beit Midrash with live Zoom option Shifra Sered is the J Street Regional Director of the Tri-State and Pennsylvania Region. She joined J Street after returning to the U.S. from living and working in Israel for four years. After graduating from the University of Massachusetts, Amherst, with a degree in linguistics and completing a year as an AmeriCorps VISTA in North Carolina, Shifra moved to Israel as part of the NIF/Shatil Social Justice Fellowship. As a New Israel Fund fellow, she worked with two grassroots, bi-national organizations empowering marginalized Jewish and Palestinian communities to organize for a more just and democratic Israel.

Yona Shem-Tov, Executive Director, Encounter Thursday, December 16, 7:00 pm on Zoom Yona Shem-Tov has worked as a Jewish educator for over 20 years. Prior to joining Encounter in 2011, Yona pursued graduate studies at The Hebrew University and doctoral research in Education and Jewish Studies at New York University as a Wexner Graduate Fellow. Encounter is an educational organization working toward informed, courageous and resilient American &amp; Israeli Jewish communal leadership on the Israeli-Palestinian conflict. They believe this moment, and responsible Jewish leadership demands of us to engage seriously and directly with both the voices of others in our community and of Palestinians in the West Bank and East Jerusalem. Their programs offer the opportunity to do both, which is a fundamental act of Ahavat Yisrael: Love of One’s People.

FEATURED SERIES: EXPLORING PERSPECTIVES ON ISRAEL Dick and Lee Laster Annual Lecture: David Harris, Chief Executive Officer, AJC New Date! Sunday, January 9, 2022, 9:00–10:15 am Beit Midrash with live Zoom option David Harris has led American Jewish Committee (AJC), described by the New York Times as the “dean of American Jewish organizations,” since 1990. He was referred to by the late Israeli President Shimon Peres as the “foreign minister of the Jewish people.” David has been honored more than 20 times, including by the governments of Azerbaijan, Belgium, Bulgaria, France, Germany, Greece, Italy, Japan, Latvia, Moldova, Poland, Spain, and Ukraine for his international efforts on behalf of the defense of human rights, advancement of the transatlantic partnership, and dedication to the Jewish people. He has written hundreds of articles in leading media outlets. Educated at the University of Pennsylvania and London School of Economics, he has been a visiting scholar at Johns Hopkins University and Oxford University.

Batya Ungar-Sargon, Deputy Opinion Editor, Newsweek Sunday, February 13, 2022, 9:00–10:15 am Beit Midrash with live Zoom option Batya Ungar-Sargon is the deputy opinion editor of Newsweek. Her job involves curating an opinion section devoted to radical diversity from across the political, racial, religious, and ideological spectrum. She is the co-host of Newsweek’s debate podcast, and her book “Bad News: How Woke Media Is Undermining Democracy,” will be out in October 2021. Batya earned her Ph.D. from UC Berkeley. Her awards include: 2017 Religion News Association finalist; 2016 Clarion Award for “On the Border of Justice;” 2016 New York Press Club Award for “City Limits 2015 Housing Coverage;” 3rd Place in the 11th Annual Ippies in 2013 for Best Story on an Immigrant Community: “After the Flood, Brighton’s Latinos Struggle in the Shadows” in City Limits; Alpha Chapter of Phi Beta Kappa Doctoral fellowship, 2011-2012; and BNOW honoree, Berkeley National Organization for Women, 2010. Batya is a Fellow of the third class of the Civil Society Fellowship, a Partnership of ADL and The Aspen Institute, and a member of the Aspen Global Leadership Network.

Bader Fund Annual Lecture: Amanda Berman, Founder and Executive Director, Zioness Sunday, March 6, 2022, 9:00–10:15 am Beit Midrash with live Zoom option Amanda Berman is the Founder and Executive Director of the Zioness Movement, a new initiative empowering and activating Zionists on the progressive left to stand proudly in social justice spaces as Jews and Zionists. Until she recently made the transition to focusing exclusively on building the much-needed Zioness community, Amanda was also a civil rights attorney fighting anti-Semitism legally, spearheading such groundbreaking initiatives as the international action against Kuwait Airways for its discrimination against Israeli nationals, and the dual cases against San Francisco State University for its constitutional and civil rights violations against Jewish and Israeli students and community members. Amanda writes on Jewish and civil rights issues and is a media contributor across various mediums and outlets. She has spoken and presented before diverse audiences including Hadassah, JNF, B’nei Brith, Jewish Federation, AIPAC, JCRC, Hillel, and many others. She is a graduate of the Anti-Defamation League’s Glass Leadership Institute, the recipient of Hadassah’s prestigious Myrtle Wreath Award, and was listed by the Algemeiner as one of the top “100 people positively contributing to Jewish life” in 2018.

FEATURED SERIES: EXPLORING PERSPECTIVES ON ISRAEL Looking at the Israeli Declaration of Independence as a Jewish Text Source Rabbi Jonathan Jaffe, Temple Beth El Sunday, April 3, 2022, 9:00–10:15 am Beit Midrash with live Zoom option The Israeli Declaration of Independence is both a document of statecraft and a uniquely Jewish text, replete with allusions to religious and historical motifs. The declaration also illustrates a careful balance between the religious and secular impulses that animated the Jewish state from its very origins and continue to inform the norms and values of today’s Israel. No Hebrew or text background required.

NEW SERIES Tacos and Torah with Rabbi Jaffe October 7, 2021, January 20, 2022, May 24, 2022 6:15 pm Rotating Between Local Taco Shops! We hope to mix our love of learning and eating with a new limited series, Order your tacos, chips and margarita, then join Rabbi Jaffe and your Beth El neighbors in an informal discussion on Jewish text. All ages welcome. The location for the event on May 24 at The Taco Project in Pleasantville. Salud!

What Lies Under the Fig Leaf? Biblical Stories of Clothing and Identity Select Sundays, 11:15 am–12:30 pm with Scholar in Residence Rabbi Norman Cohen, Ph.D. In Hans Christian Andersen’s tale, “The Emperor’s New Clothes,” the invisible suit of clothing tells us much about the character of the emperor as well as that of his subjects. It also reveals the writer’s concerns and values. The symbolic power of clothing, both in what it hides and reveals, has everything to do with identity and how we perceive it. So, as we read biblical stories through the interpretive lens of Midrash, we will gain a powerful sense of what lies under the garment of Torah.” Dates: Session 1 - April 24: Garments Concealing and Revealing our Identities. Genesis 3, 9 and 27 Session 2 - May 15: Uncovering our True Identities. Genesis 37-39, the Book of Esther