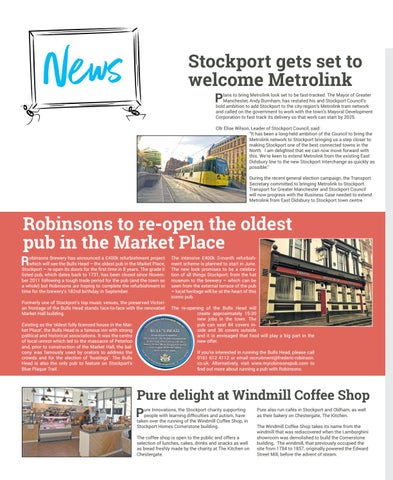 lans to bring Metrolink look set to be fast-tracked. The Mayor of Greater Manchester, Andy Burnham, has restated his and Stockport Council’s bold ambition to add Stockport to the city-region’s Metrolink tram network and called on the government to work with the town’s Mayoral Development Corporation to fast track its delivery so that work can start by 2025. Cllr Elise Wilson, Leader of Stockport Council, said: “It has been a long-held ambition of the Council to bring the Metrolink network to Stockport bringing us a step closer to making Stockport one of the best connected towns in the North.  I am delighted that we can now move forward with this. We’re keen to extend Metrolink from the existing East Didsbury line to the new Stockport Interchange as quickly as possible.” During the recent general election campaign, the Transport Secretary committed to bringing Metrolink to Stockport. Transport for Greater Manchester and Stockport Council will now progress with the Business Case needed to extend Metrolink from East Didsbury to Stockport town centre.

Robinsons to re-open the oldest pub in the Market Place

obinsons Brewery has announced a £400k refurbishment project which will see the Bulls Head – the oldest pub in the Market Place, Stockport – re-open its doors for the first time in 8 years. The grade II listed pub, which dates back to 1731, has been closed since November 2011 following a tough trade period for the pub (and the town as a whole) but Robinsons are hoping to complete the refurbishment in time for the brewery’s 182nd birthday in September. Formerly one of Stockport’s top music venues, the preserved Victorian frontage of the Bulls Head stands face-to-face with the renovated Market Hall building. Existing as the ‘oldest fully licensed house in the Market Place’, the Bulls Head is a famous inn with strong political and historical associations. It was the centre of local unrest which led to the massacre of Peterloo and, prior to construction of the Market Hall, the balcony was famously used by orators to address the crowds and for the election of ‘hustings’. The Bulls Head is also the only pub to feature on Stockport’s Blue Plaque Trail.

The intensive £400k 3-month refurbishment scheme is planned to start in June. The new look promises to be a celebration of all things Stockport; from the hat museum to the brewery – which can be seen from the external terrace of the pub – local heritage will be at the heart of this iconic pub. The re-opening of the Bulls Head will create approximately 15-20 new jobs in the town. The pub can seat 84 covers inside and 36 covers outside and it is envisaged that food will play a big part in the new offer. If you’re interested in running the Bulls Head, please call 0161 612 4112 or email recruitment@frederic-robinson. co.uk. Alternatively, visit www.myrobinsonspub.com to find out more about running a pub with Robinsons.

Pure also run cafés in Stockport and Oldham, as well as their bakery on Chestergate, The Kitchen.

The coffee shop is open to the public and offers a selection of lunches, cakes, drinks and snacks as well as bread freshly made by the charity at The Kitchen on Chestergate.

The Windmill Coffee Shop takes its name from the windmill that was rediscovered when the Lamborghini showroom was demolished to build the Cornerstone building. The windmill, that previously occupied the site from 1784 to 1857, originally powered the Edward Street Mill, before the advent of steam.

ure Innovations, the Stockport charity supporting people with learning difficulties and autism, have taken over the running of the Windmill Coffee Shop, in Stockport Homes Cornerstone building.