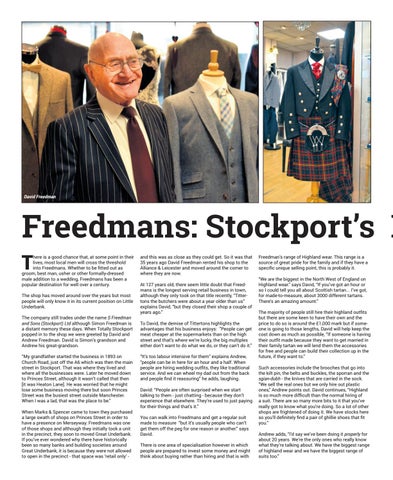 here is a good chance that, at some point in their lives, most local men will cross the threshold into Freedmans. Whether to be fitted out as groom, best man, usher or other formally-dressed male addition to a wedding, Freedmans has been a popular destination for well over a century. The shop has moved around over the years but most people will only know it in its current position on Little Underbank. The company still trades under the name S Freedman and Sons (Stockport) Ltd although Simon Freedman is a distant memory these days. When Totally Stockport popped in to the shop we were greeted by David and Andrew Freedman. David is Simon’s grandson and Andrew his great-grandson. “My grandfather started the business in 1893 on Church Road, just off the A6 which was then the main street in Stockport. That was where they lived and where all the businesses were. Later he moved down to Princes Street, although it wasn’t called that then [it was Heaton Lane]. He was worried that he might lose some business moving there but soon Princes Street was the busiest street outside Manchester. When I was a lad, that was the place to be.” When Marks & Spencer came to town they purchased a large swath of shops on Princes Street in order to have a presence on Merseyway. Freedmans was one of those shops and although they initially took a unit in the precinct, they soon to moved Great Underbank. If you’ve ever wondered why there have historically been so many banks and building societies around Great Underbank, it is because they were not allowed to open in the precinct - that space was ‘retail only’ -

and this was as close as they could get. So it was that 35 years ago David Freedman rented his shop to the Alliance & Leicester and moved around the corner to where they are now. At 127 years old, there seem little doubt that Freedmans is the longest serving retail business in town, although they only took on that title recently, “Tittertons the butchers were about a year older than us” explains David, “but they closed their shop a couple of years ago.” To David, the demise of Tittertons highlights the advantages that his business enjoys: ”People can get meat cheaper at the supermarkets than on the high street and that’s where we’re lucky, the big multiples either don’t want to do what we do, or they can’t do it.” “It’s too labour intensive for them” explains Andrew, “people can be in here for an hour and a half. When people are hiring wedding outfits, they like traditional service. And we can wheel my dad out from the back and people find it reassuring” he adds, laughing. David: “People are often surprised when we start talking to them - just chatting - because they don’t experience that elsewhere. They’re used to just paying for their things and that’s it.” You can walk into Freedmans and get a regular suit made to measure “but it’s usually people who can’t get them off the peg for one reason or another.” says David. There is one area of specialisation however in which people are prepared to invest some money and might think about buying rather than hiring and that is with

Freedman’s range of Highland wear. This range is a source of great pride for the family and if they have a specific unique selling point, this is probably it. “We are the biggest in the North West of England on Highland wear.” says David, “If you’ve got an hour or so I could tell you all about Scottish tartan... I’ve got, for made-to-measure, about 3000 different tartans. There’s an amazing amount.” The majority of people still hire their highland outfits but there are some keen to have their own and the price to do so is around the £1,000 mark but if someone is going to those lengths, David will help keep the cost down as much as possible, “If someone is having their outfit made because they want to get married in their family tartan we will lend them the accessories for free and people can build their collection up in the future, if they want to.” Such accessories include the brooches that go into the kilt pin, the belts and buckles, the sporran and the sgian-dubh - the knives that are carried in the sock. ”We sell the real ones but we only hire out plastic ones,” Andrew points out. David continues, “Highland is so much more difficult than the normal hiring of a suit. There are so many more bits to it that you’ve really got to know what you’re doing. So a lot of other shops are frightened of doing it. We have stocks here so you’ll definitely find a pair of ghillie shoes that fit you.” Andrew adds, “I’d say we’ve been doing it properly for about 20 years. We’re the only ones who really know what they’re talking about. We have the biggest range of highland wear and we have the biggest range of suits too.”