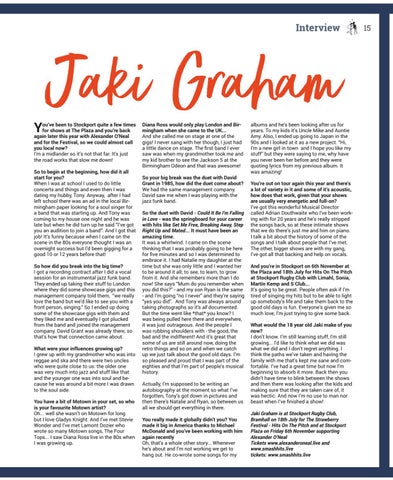 ou’ve been to Stockport quite a few times for shows at The Plaza and you’re back again later this year with Alexander O’Neal and for the Festival, so we could almost call you local now? I’m a midlander so it’s not that far. It’s just the road works that slow me down! So to begin at the beginning, how did it all start for you? When I was at school I used to do little concerts and things and even then I was dating my hubby, Tony. Anyway, after I had left school there was an ad in the local Birmingham paper looking for a soul singer for a band that was starting up. And Tony was coming to my house one night and he was late but when he did turn up he said “I’ve got you an audition to join a band”. And I got that job! It’s funny because when I came on the scene in the 80s everyone thought I was an overnight success but I’d been gigging for a good 10 or 12 years before that! So how did you break into the big time? I got a recording contract after I did a vocal session for an instrumental jazz funk band. They ended up taking their stuff to London where they did some showcase gigs and this management company told them, “we really love the band but we’d like to see you with a front person, singing.” So I ended up doing some of the showcase gigs with them and they liked me and eventually I got plucked from the band and joined the management company. David Grant was already there, so that’s how that connection came about. What were your influences growing up? I grew up with my grandmother who was into reggae and ska and there were two uncles who were quite close to us: the older one was very much into jazz and stuff like that and the younger one was into soul and because he was around a bit more I was drawn to the soul side. You have a bit of Motown in your set, so who is your favourite Motown artist? Oh... well she wasn’t on Motown for long but I love Gladys Knight. And I’ve met Stevie Wonder and I’ve met Lamont Dozier who wrote so many Motown songs, The Four Tops... I saw Diana Ross live in the 80s when I was growing up.

Diana Ross would only play London and Birmingham when she came to the UK... And she called me on stage at one of the gigs! I never sang with her though, I just had a little dance on stage. The first band I ever saw was when my grandmother took me and my kid brother to see the Jackson 5 at the Birmingham Odeon and that was awesome! So your big break was the duet with David Grant in 1985, how did the duet come about? We had the same management company. David saw me when I was playing with the jazz funk band.

So the duet with David - Could It Be I’m Falling in Love - was the springboard for your career with hits like Set Me Free, Breaking Away, Step Right Up and Mated... It must have been an amazing time. It was a whirlwind. I came on the scene thinking that I was probably going to be here for five minutes and so I was determined to embrace it. I had Natalie my daughter at the time but she was only little and I wanted her to be around it all; to see, to learn, to grow from it. And she remembers more than I do now! She says “Mum do you remember when you did this?” - and my son Ryan is the same - and I’m going “no I never” and they’re saying “yes you did”. And Tony was always around taking photographs so it’s all documented. But the time went like *that* you know? I was being pulled here there and everywhere, it was just outrageous. And the people I was rubbing shoulders with - the good, the bad and the indifferent! And it’s great that some of us are still around now, doing the retro things and so on and when we catch up we just talk about the good old days. I’m so pleased and proud that I was part of the eighties and that I’m part of people’s musical history. Actually, I’m supposed to be writing an autobiography at the moment so what I’ve forgotten, Tony’s got down in pictures and then there’s Natalie and Ryan, so between us all we should get everything in there. You really made it globally didn’t you? You made it big in America thanks to Michael McDonald and you’ve been working with him again recently Oh, that’s a whole other story... Whenever he’s about and I’m not working we get to hang out. He co-wrote some songs for my

albums and he’s been looking after us for years. To my kids it’s Uncle Mike and Auntie Amy. Also, I ended up going to Japan in the 90s and I looked at it as a new project. “Hi, I’m a new girl in town and I hope you like my stuff” but they were saying to me, why have you never been her before and they were quoting lyrics from my previous album. It was amazing! You’re out on tour again this year and there’s a lot of variety in it and some of it’s acoustic, how does that work, given that your shows are usually very energetic and full-on? I’ve got this wonderful Musical Director called Adrian Douthwaite who I’ve been working with for 20 years and he’s really stripped the songs back, so at these intimate shows that we do there’s just me and him on piano. I talk a bit about the history of some of the songs and I talk about people that I’ve met. The other, bigger shows are with my gang, I’ve got all that backing and help on vocals. And you’re in Stockport on 6th November at the Plaza and 18th July for Hits On The Pitch at Stockport Rugby Club with Limahl, Sonia, Martin Kemp and S Club... It’s going to be great. People often ask if I’m tired of singing my hits but to be able to light up somebody’s life and take them back to the good old days is fun. Everyone’s given me so much love, I’m just trying to give some back. What would the 18 year old Jaki make of you now? I don’t know. I’m still learning stuff, I’m still growing... I’d like to think what we did was what we did and I don’t regret anything. I think the paths we’ve taken and having the family with me that’s kept me sane and comfortable. I’ve had a great time but now I’m beginning to absorb it more. Back then you didn’t have time to blink between the shows and then there was looking after the kids and making sure that they are taken care of, it was hectic. And now I’m no use to man nor beast when I’ve finished a show! Jaki Graham is at Stockport Rugby Club, Bramhall on 18th July for The Strawberry Festival - Hits On The Pitch and at Stockport Plaza on Friday 6th November supporting Alexander O’Neal Tickets www.alexanderoneal.live and www.smashhits.live tickets: www.smashhits.live