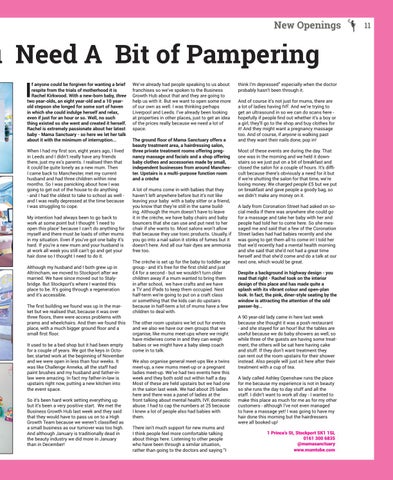 u Need A Bit of Pampering I

f anyone could be forgiven for wanting a brief respite from the trials of motherhood it is Rachel Kirkwood. With a new-born baby, three two year-olds, an eight year-old and a 10 yearold stepson she longed for some sort of haven in which she could indulge herself and relax, even if just for an hour or so. Well, no such thing existed so she went and created it herself. Rachel is extremely passionate about her latest baby - Mama Sanctuary - so here we let her talk about it with the minimum of interruption... When I had my first son, eight years ago, I lived in Leeds and I didn’t really have any friends there, just my ex’s parents. I realised then that it could be quite lonely as a new mum. Then I came back to Manchester, met my current husband and had three children within nine months. So I was panicking about how I was going to get out of the house to do anything - and I had the oldest to take to school as well and I was really depressed at the time because I was struggling to cope. My intention had always been to go back to work at some point but I thought ‘I need to open this place’ because I can’t do anything for myself and there must be loads of other mums in my situation. Even if you’ve got one baby it’s hard. If you’re a new mum and your husband is at work all week you still can’t go and get your hair done so I thought I need to do it. Although my husband and I both grew up in Altrincham, we moved to Stockport after we married. We have since moved out to Stalybridge. But Stockport’s where I wanted this place to be. It’s going through a regeneration and it’s accessible. The first building we found was up in the market but we realised that, because it was over three floors, there were access problems with prams and wheelchairs. And then we found this place, with a much bigger ground floor and a small first floor. It used to be a bed shop but it had been empty for a couple of years. We got the keys in October, started work at the beginning of November and we were open in less than four weeks. It was like Challenge Anneka, all the staff had paint brushes and my husband and father-inlaw were amazing. In fact my father-in-law is upstairs right now, putting a new kitchen into the event space. So it’s been hard work setting everything up but it’s been a very positive start. We met the Business Growth Hub last week and they said that they would have to pass us on to a High Growth Team because we weren’t classified as a small business as our turnover was too high. And although January is traditionally dead in the beauty industry we did more in January than in December!

We’ve already had people speaking to us about franchises so we’ve spoken to the Business Growth Hub about that and they are going to help us with it. But we want to open some more of our own as well. I was thinking perhaps Liverpool and Leeds. I’ve already been looking at properties in other places, just to get an idea of the prices really because we need a lot of space. The ground floor of Mama Sanctuary offers a beauty treatment area, a hairdressing salon, three private treatment rooms offering pregnancy massage and facials and a shop offering baby clothes and accessories made by small, independent businesses from around Manchester. Upstairs is a multi-purpose function room and a crèche A lot of mums come in with babies that they haven’t left anywhere before but it’s not like leaving your baby with a baby sitter or a friend, you know that they’re still in the same building. Although the mum doesn’t have to leave it in the crèche, we have baby chairs and baby bouncers that she can use and put next to her chair if she wants to. Most salons won’t allow that because they use toxic products. Usually, if you go into a nail salon it stinks of fumes but it doesn’t here. And all our hair dyes are ammonia free too. The crèche is set up for the baby to toddler age group - and it’s free for the first child and just £4 for a second - but we wouldn’t turn older children away if a mum wanted to bring them in after school, we have crafts and we have a TV and iPads to keep them occupied. Next half-term we’re going to put on a craft class or something that the kids can do upstairs because in half-term a lot of mums have a few children to deal with. The other room upstairs we let out for events and we also we have our own groups that we organise, like mums meet-ups where we might have midwives come in and they can weigh babies or we might have a baby sleep coach come in to talk. We also organise general meet-ups like a twins meet-up, a new mums meet-up or a pregnant ladies meet-up. We’ve had two events here this week and they both sold out within half a day. Most of these are held upstairs but we had one in the salon last week. We had about 25 ladies here and there was a panel of ladies at the front talking about mental health, IVF, domestic abuse. I had to cap the numbers at 25 because I knew a lot of people also had babies with them. There isn’t much support for new mums and I think people feel more comfortable talking about things here. Listening to other people who have been through a similar situation, rather than going to the doctors and saying “I

think I’m depressed” especially when the doctor probably hasn’t been through it. And of course it’s not just for mums, there are a lot of ladies having IVF. And we’re trying to get an ultrasound in so we can do scans here hopefully if people find out whether it’s a boy or a girl, they’ll go to the shop and buy clothes for it! And they might want a pregnancy massage too. And of course, if anyone is walking past and they want their nails done, pop in! Most of these events are during the day. That one was in the morning and we held it downstairs so we just put on a bit of breakfast and closed the salon for a couple of hours. It’s difficult because there’s obviously a need for it but if we’re shutting the salon for that time, we’re losing money. We charged people £5 but we put on breakfast and gave people a goody bag, so we didn’t make any money on it. A lady from Coronation Street had asked on social media if there was anywhere she could go for a massage and take her baby with her and people had told her to come here. So she messaged me and said that a few of the Coronation Street ladies had had babies recently and she was going to get them all to come in! I told her that we’d recently had a mental health morning and she said that she’d not had a great time herself and that she’d come and do a talk at our next one, which would be great. Despite a background in highway design - you read that right - Rachel took on the interior design of this place and has made quite a splash with its vibrant colour and open-plan look. In fact, the pink, diner-style seating by the window is attracting the attention of the odd passer-by... A 90 year-old lady came in here last week because she thought it was a posh restaurant - and she stayed for an hour! But the tables are useful because we do baby showers as well, so while three of the guests are having some treatment, the others will be sat here having cake and stuff. If they don’t want treatment they can rent out the room upstairs for their shower instead. Also people will just sit here after their treatment with a cup of tea. A lady called Ashley Openshaw runs the place for me because my experience is not in beauty so she runs the day to day stuff and all the staff. I didn’t want to work all day - I wanted to make this place as much for me as for my other customers - although I’ve not even managed to have a massage yet! I was going to have my hair done this morning but the hairdressers were all booked up! 1 Prince’s St, Stockport SK1 1SL 0161 300 6835 @mamasanctuary www.mumtobe.com