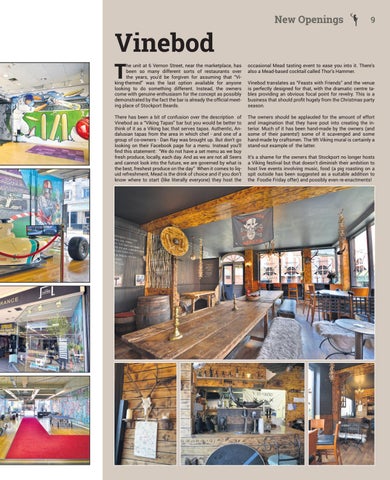 he unit at 6 Vernon Street, near the marketplace, has been so many different sorts of restaurants over the years, you’d be forgiven for assuming that “Viking-themed” was the last option available for anyone looking to do something different. Instead, the owners come with genuine enthusiasm for the concept as possibly demonstrated by the fact the bar is already the official meeting place of Stockport Beards.

There has been a bit of confusion over the description of Vinebod as a “Viking Tapas” bar but you would be better to think of it as a Viking bar, that serves tapas. Authentic, Andalusian tapas from the area in which chef - and one of a group of co-owners - Dan Ray was brought up. But don’t go looking on their Facebook page for a menu. Instead you’ll find this statement: “We do not have a set menu as we buy fresh produce, locally, each day. And as we are not all Seers and cannot look into the future, we are governed by what is the best, freshest produce on the day” When it comes to liquid refreshment, Mead is the drink of choice and if you don’t know where to start (like literally everyone) they host the

The owners should be applauded for the amount of effort and imagination that they have pout into creating the interior. Much of it has been hand-made by the owners (and some of their parents!) some of it scavenged and some hand-made by craftsmen. The 9ft Viking mural is certainly a stand-out example of the latter.

Vinebod translates as “Feasts with Friends” and the venue is perfectly designed for that, with the dramatic centre tables providing an obvious focal point for revelry. This is a business that should profit hugely from the Christmas party season.

It’s a shame for the owners that Stockport no longer hosts a Viking festival but that doesn’t diminish their ambition to host live events involving music, food (a pig roasting on a spit outside has been suggested as a suitable addition to the Foodie Friday offer) and possibly even re-enactments!