Family Assessment of the Lancaster Family 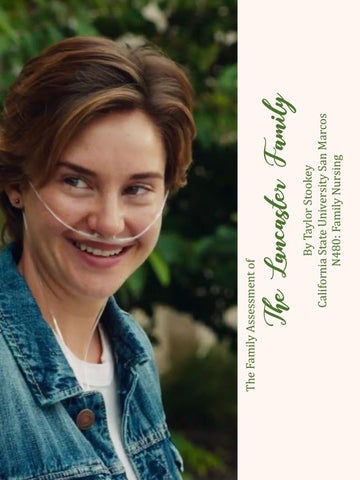 The Family Assessment of

Meet Hazel Hazel Lancaster is a 17 year old teenager, who has terminal thyroid cancer that has spread to her lungs. Besides her illness, Hazel is a very normal adolescent. She like to read, travel and spend as much time with her friends and boyfriend as possible. Hazel falls into the role confusion side of her adolescent development stage, because she is constantly struggling to find her role within her family, friends and relationship with the knowledge she has a terminal illness. Hazel’s Illness: Thyroid cancer is a relatively uncommon form of cancer, that usually first presents itself as a lump or nodule in the thyroid. Often, the prognosis for thyroid cancer is very good, especially for younger patients (American Thyroid Association, 2017). However, Hazel has stage IV thyroid cancer, because it has metastasized to her lungs. This lung cancer presents itself with the majority of Hazel’s outward symptoms, including: shortness of breath, recurrent pneumonia, and coughing (American Cancer Society, 2017).

The Lancaster family unit consists of Hazel and her two parents: Michael and Barbara Lancaster. Hazel is very close to both of her parents, who are supportive of her and helpful in the management of Hazel’s illness. The family lives in a two story house in Indianapolis. Hazel’s mother converted the downstairs office into a bedroom for Hazel when Hazel’s cancer started to spread to her lungs, because she was having trouble going up and down the stairs on a daily basis. Michael works to support the family, and Barbara is a stay-at-home mom that takes care of both the majority of the household duties and the management of Hazel’s disease. Both Barbara and Michael were single children, and both of their parents are dead, leaving them with little support from others in their family. The Lancasters all consider themselves of to be of the Catholic religion, however they don’t attend church on a regular basis or follow many of the traditions. Barbara used to go to church, however, she stopped going as much when Hazel was diagnosed with the cancer and is currently unsure of her relationship with God.

Michael is quiet and emotional, and often cries when discussing Hazel’s disease or treatments. He works as an office manager, and is often worried about the finances involves with Hazel’s cancer. At age 55, Michael is the middle adulthood stage where he falls in the generativity side of the spectrum. He finds use in his life through helping not only Hazel but Barbara in taking care of the family while Barbara focuses to help Hazel with her disease. Besides this, he is largely uninvolved in the management of her disease, but tries to be a supportive family member in other areas of Hazel’s life. Barbara is the backbone of the family. She works tirelessly to manage Hazel’s illness, and has dropped the majority of her hobbies and daily activities to help Hazel cope with the cancer. She is Hazel’s primary caretaker. Barbara is studying to become a support group leader for cancer patients. At 57 years old, Barbara is in the generativity side of the middle adulthood developmental stage. The majority of her life is spent guiding and helping Hazel with the management of her cancer and raising an adolescent.

The Lancaster Family Structure Family Type: The Lancasters are in a traditional, nuclear family, which consists of two parents and one or more children. (Perry, Hockenberry, Lowdermilk, &amp; Wilson, 2014). Developmental Stage: Under Duvall’s theory of family development, the Stewarts fall in the family with adolescent stage, where the parental roles are changing to allow the children increased independence. The three major developmental tasks for this stage are to allow and help the child become more independent, learning to cope with this new independence, and developing new issues beyond childcare (Rago, 2016). For the first task, to allow Hazel to become more independent, Michael and Barbara are struggling to give Hazel as much independence as possible because of her disease. Barbara takes Hazel and Hazel’s boyfriend on a trip to Amsterdam, and allows them to have experiences alone in the foreign country. However, she stays with them on the trip, and helps to monitor Hazel and Hazel’s health. The second task is coping with the newfound independence. Barbara particularly struggles with this one, and is very emotional about Hazel and any impendence Hazel has. Finally, the third task is to develop interests outside of taking care of the children. Hazel&#39;s mother has just started to develop other interests with her new career of a cancer support group, although it is related to Hazel. This task is particularly important for Hazel’s parents, because her disease is terminal. These outside interests will help with the caregiver strains that Hazel’s parents experience as will help them to cope when she passes away. Communication: The majority of the communication within the family is between Mrs. Lancaster and Hazel. Although it irritates Hazel at times, they are very open and communicable about Hazel’s life and her disease. Hazel is constantly updating her mother about where she is, who she is with, and what she is doing. They also frequently have open conversations about Hazel’s health. Barbara also uses nonverbal communication to demonstrate affection for her child, by giving Hazel lots of hugs and kisses. Michael, on the other hand, has less open, verbal communication with his wife and daughter. He spends the majority of his time at work, and has trouble expressing his feelings for his family when he is at home. He uses nonverbal communication to show that he cares about his family, by cooking them breakfast, financially supporting them, and buying Hazel gifts like a new car for her 16th birthday. Occasionally he also will use touch in the form of hugs to support Hazel.

The Lancaster Family - Hazel has a mature understanding of her disease and understands that she will probably die from the disease in the near future. She has a very adult take on these issues, and is able to make arrangements for her family for when she passes. - Mrs. Lancaster and Hazel have very open communication with each other, which is uncommon for adolescents who usually prefer to confide in their friends. - Mrs. Lancaster is developing outside hobbies that combat caregiver strain and act as coping mechanisms for her daughters illness. - The family all lives in one home, which is very safe and comfortable for the family. They meet their basic needs of being well fed, well dressed and comfortable. - The family has built a strong support system for each other

- While the family has a strong support system, it promotes little autonomy as each of the member’s lives revolve around Hazel and her cancer - The family’s support system is the only system they have. Only Hazel has friends outside of her family and the family has no other family members to help. - Mr. Lancaster has trouble with communication, and needs help in learning how to communicate with his wife and daughter. - Mr. Lancaster feels stressed regarding the family’s financials. Although he is able to financially support his family, he regularly is late on different bills and needs assistance in paying for Hazel’s healthcare. - Mrs. Lancaster’s life revolves mostly around Hazel; any hobbies she does have still involve Hazel’s cancer diagnosis

Application of Family Theory The Family Systems Theory indicated that individuals interact and form connections to function as the family unit. It focuses on the connections and interdependence of all of the individuals within the system, so that any changes within one person causes change within the entire family (Kaakinen, Duff-Gedaly, Hanson &amp; Coelho, 2015). The major change in the Lancaster’s family is Hazel’s health. Hazel has been struggling with the ups and downs of her cancer diagnosis for the last year and a half. Prior to this, the Lancaster family was a fully functioning family unit. Both Michael and Barbara held jobs to help support the family. They lives in a middle income, safe neighborhood. Michael and Barbara had a functioning marriage with open communication, and they worked together to support one another and their daughter. Then, Hazel was diagnosed with cancer and each family member had to shift their lives. Hazel’s adolescent life changed from focusing on her role within her friends like a healthy teenager to focusing on adjusting her role as a patient. This led to a cascade of changes within the other family members. Barbara quit her job, and began to fully focus on Hazel’s health. She dropped many of the hobbies that she used to have. In the absence of the dual income, Michael picked up more hours at work in order to make ends meet for their household. Each family member had to shift their focus in order to continue to function at a unit with Hazel’s health.

The Lancaster’s Problems Compromised Family Coping Michael, Barbara and Hazel are having issues coping with Hazel’s disease and prognosis. This leads to a change in usual communication patterns (Michael is less communicative with his wife and daughter than he was prior to her diagnosis) and lack of goal directed behavior (Neither of the parents have goals that extend beyond their daughter’s death). Outcomes: 1. Hazel, Barbara and Michael will each verbalize effective coping strategies they can use in their day to day lives 2. Hazel, Barbara and Michael will seek help from health care professionals when appropriate, including online support groups 3. The family will remain free from destructive behaviors toward the family or others Interventions: - Observe for contributing factors of ineffective coping, including: poor self concept, grief, lack of problem solving skills, lack of support, or recent change in life situations. - Use therapeutic communication techniques including empathy, active listening, and confrontation to encourage Hazel and her family to express emotions - Help the family to set realistic goals - Discuss the family’s need to accept a situation

Caregiver Role Strain Michael and Barbara’s lives revolve around Hazel and Hazel’s illness. While Michael has his work and Barbara has her training to become a social worker, both of these activities are focused on better helping Hazel. This puts them at risk for caregiver’s role strain, which is defined by apprehension about the future, dysfunctional change in caregiving activities, and preoccupation with care routines. Outcomes: 1. Michael and Barbara will identify resources available to help in giving care or to support the caregivers in giving care 2. They will take part in self-care activities to maintain own physical and emotional health 3. The will report reduced feelings of burden and distress Interventions: - Regularly monitor the family for signs of depression, anxiety, burden or deteriorating physical health in the Hazel’s parents throughout the care situation - Arrange for intervals of respite care for Hazel’s parents and encourage its use - Help Hazel’s dad to assess the family’s financial resources - Encourage spirituality as a source of support for coping, particularly for Hazel’s mother

Family Assessment of the Lancaster Family