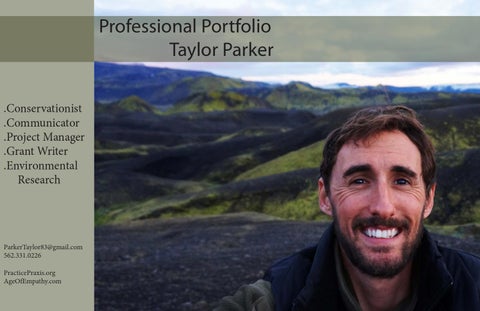 Taylor Parker has been a professional conservationist since 2004. After starting 3 successful environmental consultancy companies and working on 2 multimillion dollar wetland restoration projects,Taylor is focusing his energies to further contribute toward biodiversity conservation. Through the ensuing pages you will find how he has transformed his initial work on 8 key rare species into a career and, more importantly, a dedicated passion that can be applied toward any conservation effort

2006: Boat Trip From Boston to Long Beach Through the Panama

Photos and Design by Taylor Parker unless otherwise indicated.

Through Taylorâ&#x20AC;&#x2122;s Environmental Consultancy work, he has contributed toward the conservation of critical salt marsh habitat. To do this, he has worked on wetland conservation from several angles: Endangered Species Grants and Fundraising Professional Reports Restoration projects

Grants and Fundraising Taylor has raised almost $14 million dollars for conservation projects he has worked on since 2007. Most of this has been through grant writing and managment but has also included partnership development.

Professional Reports As a professional consultant, Taylor has developed several reports and plans to assist the conservation efforts. Each of the reports are well researched, over 100 pages and cost the clients $10k- $60k.

The Colorado Lagoon Project has been the most successful project Taylor has worked with. Since becoming involved in 2007, Taylor has been involved with turning this 11 acre wetland from the 3rd worst water quality habitat in California to one of the cleanest, 80k cubic yards of contaminated material were removed, 11 million dollars were raised, 25k+ children were educated, 18k+ plants planted, and acres of marsh restored.

In 2006, after increasing the non-profitâ&#x20AC;&#x2122;s capacity 300%, Taylor suggested changes to grow the company larger. His boss at the time refused and told him if he thought he could do it better, he could leave and try it his self. Taylor took the challenge and since January 2007, has created 3 environmental for-profit businesses and has created or managed another 3 organizations. Through these companies and organizations Taylor has provided 20 employment opportunities and 70 internships.

Toward the effort of understanding global biodiversity conservation, Taylor has undertaken several Conservation Treks over the past decade. These Treks include: Restoration Activities Reseach Programs Explorations

Of all the adventurous Conservation Treks Taylor has undertaken, the Research Programs have proven the most exciting and beneficial toward further conservation activities. 4 Photos to Left: 2011 Month-long Hawaiian Island Research of Sailfish and Rockfish Fisheries for NOAAâ&#x20AC;&#x2122;s Teacher at Sea Not shown: 2008 Round Ray Studies in Seal Beach, CA 2009 Elasmobranch Studies in Bolsa Chica, Ca

A professional communicator utilizes a variety of media to convey the appropriate message. Taylor is a proficient public speaker and can wield multiple other vectors to express the necessary theme. Taylor has built websites, managed multiple social media platforms, constructed several multimedia presentations. Taylor Parker's Portfolio of highlight from his professional career. You can contact him at ParkerTaylor83@gmail.com

Taylor Parker's Portfolio of highlight from his professional career. You can contact him at ParkerTaylor83@gmail.com