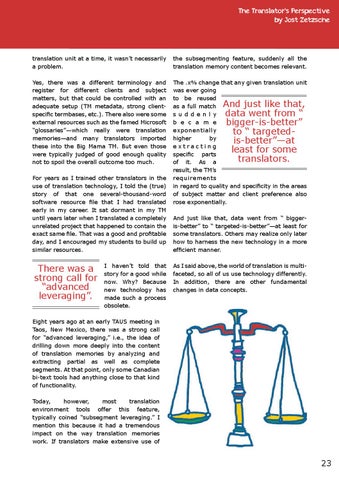 The Translator’s Perspective by Jost Zetzsche

translation unit at a time, it wasn’t necessarily a problem.

Yes, there was a different terminology and register for different clients and subject matters, but that could be controlled with an adequate setup (TM metadata, strong clientspecific termbases, etc.). There also were some external resources such as the famed Microsoft “glossaries”—which really were translation memories—and many translators imported these into the Big Mama TM. But even those were typically judged of good enough quality not to spoil the overall outcome too much.

The .x% change that any given translation unit was ever going to be reused as a full match s u d d e n l y b e c a m e exponentially higher by extracting specific parts of it. As a result, the TM’s requirements in regard to quality and specificity in the areas of subject matter and client preference also rose exponentially.

For years as I trained other translators in the use of translation technology, I told the (true) story of that one several-thousand-word software resource file that I had translated early in my career. It sat dormant in my TM until years later when I translated a completely unrelated project that happened to contain the exact same file. That was a good and profitable day, and I encouraged my students to build up similar resources.

There was a strong call for “advanced leveraging”.

I haven’t told that story for a good while now. Why? Because new technology has made such a process obsolete.

And just like that, data went from “ bigger-is-better” to “ targetedis-better”—at least for some translators.

And just like that, data went from “ biggeris-better” to “ targeted-is-better”—at least for some translators. Others may realize only later how to harness the new technology in a more efficient manner. As I said above, the world of translation is multifaceted, so all of us use technology differently. In addition, there are other fundamental changes in data concepts.

Eight years ago at an early TAUS meeting in Taos, New Mexico, there was a strong call for “advanced leveraging,” i.e., the idea of drilling down more deeply into the content of translation memories by analyzing and extracting partial as well as complete segments. At that point, only some Canadian bi-text tools had anything close to that kind of functionality. Today, however, most translation environment tools offer this feature, typically coined “subsegment leveraging.” I mention this because it had a tremendous impact on the way translation memories work. If translators make extensive use of 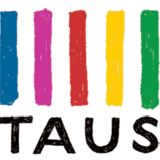