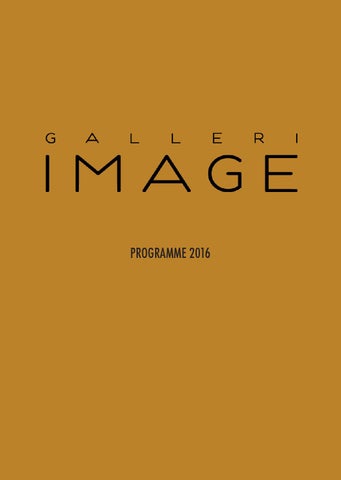 Vladimir Tomic’s exhibition Remembering the Nowhere consists of images taken from family albums and a collection of private objects gathered from the former Yugoslavian diaspora, who came to Denmark during the 90s, mostly as refugees. In combining art film/experimental documentary, family photographs and objects from before, during and after the war in former Yugoslavia, Vladimir Tomić engages with personal, yet collective memories from this group of people. The exhibition is supported by The Danish Arts Foundation.

Always, In Spite of Everything focuses on universal themes of identity, belonging, migration and growth â&amp;#x20AC;&amp;#x201C; issues that affect us all. Working with analogue photography, Cherono invites the viewer to reflect on intimate issues regarding home, belonging, and the complex nature of dislocation.

The exhibition is supported by The Danish Arts Foundation and DCCD (CKU) and is a part of Images 2016.

In Between - In Transit

In the group exhibition In Between - In Transit each artistâ&amp;#x20AC;&amp;#x2122;s project offers a variety of visual narratives which individually reflect on a civilization in transition. Through photography and film, the artists explore stories from people who have traveled to a culture that is markedly different from the one in which they were born. On May 29 a seminar with the artists and the curator will be held in connection with Art Weekend Aarhus. The exhibition is supported by The Danish Arts Foundation, Aarhuus Stiftstidende Foundation, Merchant F.L Foghts Foundation and The City of Aarhus. Gohar Dashti, Stateless 2014/15

The exhibition Against the Grain focuses on the industrial city of Baotou. It is here that approximately half of the world´s supplies of rare earth minerals are mined and refined. Minerals, used as components in the production of contemporary image- and communication technology. Ramdas and Danielewitz’s cameras document the environmental consequences of their own creation. Against the Grain is part of a new photography biennial, which is a collaboration between Fotografisk Center in Copenhagen, Brandts in Odense and Galleri Image. The project’s publications and curatorial work is supported by the Novo Nordisk Foundation.

The Cloud of Unknowing is concerned with satellite photographs and their transmission. It explores the transition of machine-readable information into one-dimensional forms. This solo-exhibition is part of a larger research project on surveillance, art and photography in Europe after the millennium by the Hasselblad Foundation researcher and curator Louise Wolthers. Concurrently James Bridle is part of the group exhibition Watched! showing in Aros and Kunsthal Aarhus. The exhibition is a collaboration between The Hasselblad Foundation, Valand Akademiet, ARoS, Kunsthal Aarhus, C/O Berlin and Galleri Image.

Touring Exhibitions Liu Jin (CHI) exhibit works from Danish Diva-Residency At The Dan ish Cultural Centre in Beijing during the second half of the year 2016. For further information go to: www.galleriimage.dk

Magdalena Bors (AUS) The Art of Domestic Compulsion. The exihibition is touring Spain from April 2015 to December 2016.

FRESH EYES - INTERNATIONAL ARTISTS RETHINK AARHUS FRESH EYES is an art project concerned with exploring, rethinking and reimagining the city of Aarhus. International photographic artists and writers will undertake work for the project, culminating in a series of exhibitions and events, together with the publication of a coffee-table art book in 2017.The project is a collaboration between Galleri Image and Aarhus Centre of Literature. Exhibitions and presentations of work produced will be showcased at Galleri Image and in other diverse settings in the vicinity of the gallery from March, 2017. The participating photographic artists during 2016 are: Rana El Nemr (EG), Anushree Fadnavis (IN), and Teresa Meka (GA). Fresh Eyes - International artist rethink Aarhus is supported by Aarhus 2017, Aarhus Municipality, DCCD, The Bikuben Foundation and The Nordic Culture Fund. Miriam 0â&amp;#x20AC;&amp;#x2122;Connor (IRL), The Greenhouses, FRESH EYES, Aarhus 2014

PHOTOBOOK WEEK AARHUS 2016 (PWA) From September 26th – October 2nd Galleri Image invites audiences to engage with and experience photobooks from all over the world. Now in its third edition, PhotoBook Week Aarhus is held in collaboration with The Aarhus School of Architecture and Jutland Art Academy. The theme of this years PhotoBook Week Aarhus is ‘Collaborative Processes’, where the focus shifts towards creative processes and collaborations that occur throughout the development of the Photobook. For further information go to: www.photobookweek.org

Galleri Image is a non-commercial exhibition space, which aims to promote high quality photo based art by showing Danish and international photography and video. Founded in 1977, the gallery is the longest-running non-profit exhibition space for photographic art in Scandinavia and, for many years, it was the only photo art gallery in Denmark. Galleri Image is a member of the Danish Association of Art Centres. Over the past 39 years, Galleri Image has achieved an international reputation for its exhibitions and has conbributed considerably to the recognition and understanding of photography as an important and independent medium in the world of visual art. Based in Aarhus, Denmark, and with free entry to all its shows, the gallery regularly host talks, discussions, seminars, workshops, and guided exhibition tours. Galleri Image is supported by