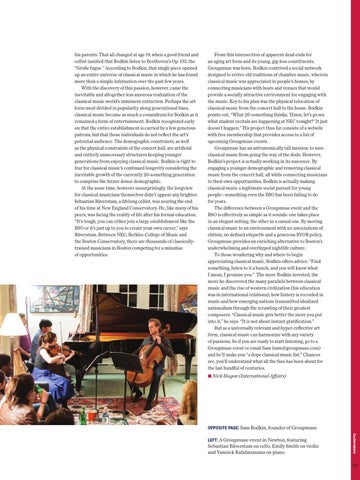 his parents. That all changed at age 19, when a good friend and cellist insisted that Bodkin listen to Beethoven’s Op. 133, the “Große fugue.” According to Bodkin, that single piece opened up an entire universe of classical music in which he has found more than a simple infatuation over the past few years. With the discovery of this passion, however, came the inevitable and altogether less amorous realization of the classical music world’s imminent extinction. Perhaps the art form most divided in popularity along generational lines, classical music became as much a conundrum for Bodkin as it remained a form of entertainment. Bodkin recognized early on that the entire establishment is carried by a few generous patrons, but that those individuals do not reflect the art’s potential audience. The demographic constraints, as well as the physical constraints of the concert hall, are artificial and entirely unnecessary structures keeping younger generations from enjoying classical music. Bodkin is right to fear for classical music’s continued longevity considering the inevitable growth of the currently 20-something generation to comprise the future donor demographic. At the same time, however unsurprisingly, the longview for classical musicians themselves didn’t appear any brighter. Sebastian Bäverstam, a lifelong cellist, was nearing the end of his time at New England Conservatory. He, like many of his peers, was facing the reality of life after his formal education. “It’s tough, you can either join a large establishment like the BSO or it’s just up to you to create your own career,” says Bäverstam. Between NEC, Berklee College of Music and the Boston Conservatory, there are thousands of classicallytrained musicians in Boston competing for a minutiae of opportunities.

From this intersection of apparent dead ends for an aging art form and its young, gig-less constituents, Groupmuse was born. Bodkin contrived a social network designed to revive old traditions of chamber music, wherein classical music was appreciated in people’s homes, by connecting musicians with hosts and venues that would provide a socially attractive environment for engaging with the music. Key to his plan was the physical relocation of classical music from the concert hall to the home. Bodkin points out, “What 20-something thinks, ‘Hmm, let’s go see what student recitals are happening at NEC tonight?’ It just doesn’t happen.” His project thus far consists of a website with free membership that provides access to a list of upcoming Groupmuse events. Groupmuse has an astronomically tall mission: to save classical music from going the way of the dodo. However, Bodkin’s project is actually working in its nascence. By engaging a younger demographic and removing classical music from the concert hall, all while connecting musicians to their own opportunities, Bodkin is actually making classical music a legitimate social pursuit for young people—something even the BSO has been failing to do for years. The difference between a Groupmuse event and the BSO is effectively as simple as it sounds: one takes place in an elegant setting, the other in a casual one. By moving classical music to an environment with no associations of elitism, no defined etiquette and a generous BYOB policy, Groupmuse provides an enriching alternative to Boston’s underwhelming and overhyped nightlife culture. To those wondering why and where to begin appreciating classical music, Bodkin offers advice: “Find something, listen to it a bunch, and you will know what I mean, I promise you.” The more Bodkin invested, the more he discovered the many parallels between classical music and the rise of western civilization (his education was in international relations); how history is recorded in music and how emerging nations transmitted idealized nationalism through the scrawling of their greatest composers. “Classical music gets better the more you put into it,” he says. “It is not about instant gratification.” But as a universally relevant and hyper-reflective art form, classical music can harmonize with any variety of passions. So if you are ready to start listening, go to a Groupmuse event or email Sam (sam@groupmuse.com) and he’ll make you “a dope classical music list.” Chances are, you’ll understand what all the fuss has been about for the last handful of centuries.

Issue 32 of Tastemakers Magazine. Summer 2013. Featuring: Interview with Bob Hertig of U-turn Audio, Interview with the Antlers, Bio/interview on Groupmuse, and a guide to summer festivals 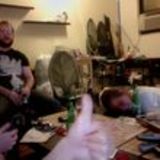