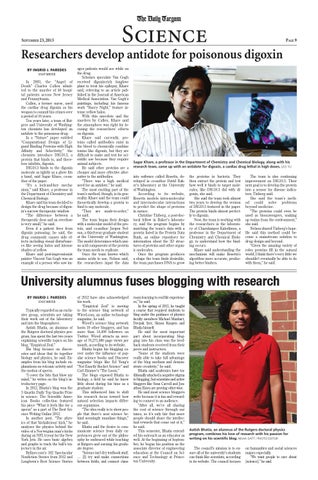 In 2003, the “Angel of Death” Charles Cullen admitted to the murder of 40 hospital patients across New Jersey and Pennsylvania. Cullen, a former nurse, used the cardiac drug digoxin as his weapon to commit his crimes over a period of 16 years. Ten years later, a team of Rutgers and University of Washington chemists has developed an antidote to the poisonous drug. In a “Nature” paper entitled “Computational Design of Ligand Binding Proteins with High Affinity and Selectivity,” the chemists introduce DIG10.3, a protein that binds to, and therefore inhibits, digoxin. DIG10.3 binds to the digoxin molecule as tightly as a glove fits a hand, said Sagar Khare, co-author of the paper. “It’s a lock-and-key mechanism,” said Khare, a professor in the Department of Chemistry and Chemical Biology. Khare said his team decided to design the drug because of digoxin’s narrow therapeutic window. “The difference between a therapeutic dose and an overdose is very small,” he said. Even if a patient lives from digoxin poisoning, he said, the drug commonly causes side effects including visual disturbances like seeing halos and intense shades of yellow. Khare said post-impressionist painter Vincent Van Gogh was an example of a person who saw im-

ages patients would see while on the drug. Scholars speculate Van Gogh received digoxin-rich foxglove plant to treat his epilepsy, Khare said, referring to an article published in the Journal of American Medical Association. Van Gogh’s paintings, including his famous work “Starry Night,” feature intense yellow halos. With this anecdote and the murders by Cullen, Khare said the atmosphere was right for focusing the researchers’ efforts on digoxin. Khare said currently, proteins called antibodies exist in the blood to chemically combine toxins like digoxin, but they are difficult to make and test for scientific use because they require animal subjects. He said other proteins are a cheaper and more effective alternative to the antibodies. “There was a high medical need for an antidote,” he said. The most exciting part of the team’s method, though, is its generality. Khare said the team could theoretically develop a protein to bind to any molecule. “They are made-to-order,” he said. The team began their design with a molecular model of the protein, said co-author Jorgen Nelson, a third-year graduate student at the University of Washington. The model determines which amino acid components of the protein the team needs to replicate. Once the team knows which amino acids to use, Nelson said, the researchers input the data

Sagar Khare, a professor in the Department of Chemistry and Chemical Biology, along with his research team, came up with an antidote for digoxin, a cardiac drug lethal in high doses. LEO YU into software called Rosetta, developed in co-author David Baker’s laboratory at the University of Washington. According to its website, Rosetta models intra-molecular and intermolecular interactions to predict the shape of proteins in nature. Christine Tinberg, a post-doctoral fellow in Baker’s laboratory, said the program begins by matching the team’s data with a protein listed in the Protein Data Bank, an online repository for information about the 3D structures of proteins and other organic molecules. Once the program produces a shape the team finds desirable, the team purchases DNA to grow

the proteins in bacteria. They then extract the protein and test how well it binds to target molecules, like DIG10.3 did with digoxin, she said. She said the team took almost two years to develop the version of DIG10.3 featured in the paper. The protein binds almost perfectly to digoxin. Now, the team is working with the researchers in the laboratory of Charalampos Kalodimos, a professor in the Department of Chemistry and Chemical Biology, to understand how the binding occurs. Khare said understanding the mechanism will make Rosetta’s algorithm more accurate, producing better binders.

The team is also continuing improvement on DIG10.3. Their next goal is to develop the protein into a sensor for disease indicators, Tinberg said. She said the team’s method could solve problems beyond medicine. “The proteins could even be used as bioscavengers, soaking up toxins from the environment,” she said. Nelson shared Tinberg’s hope. He said this method could become a mainstream solution to drug design and beyond. “Given the amazing variety of roles proteins fill in the natural world, I think there’s very little we shouldn’t eventually be able to do with them,” he said.

Typically regarded as an exclusive group, scientists are taking their work out of the laboratory and into the blogosphere. Aatish Bhatia, an alumnus of the Rutgers doctoral physics program, has spent the last two years explaining scientific topics on his blog, “Empirical Zeal.” His blog focuses on discoveries and ideas that tie together biology and physics, he said. Examples from his blog include explanations on volcanic activity and the motion of sperm. “I cover the bits that blow my mind,” he writes on the blog’s introductory page. In 2012, Bhatia’s blog won the 3 Quarks Daily Top Quarks Prize in science. The Scientific American Books collection featured his piece “What it feels like for a sperm” as a part of The Best Science Writing Online 2012. In another post, “The physics of that ‘kickalicious’ kick,” he analyzes the physics behind the video of a Norwegian man’s kicks during an NFL tryout for the New York Jets. He uses basic algebra and graphs to track the ball’s trajectory in the air. Byliner.com’s 102 Spectacular Nonfiction Stories from 2012 and Longform’s Best Science Stories

of 2012 have also acknowledged his work. “Empirical Zeal” is moving to the science blog network of Wired.com, an online technology magazine, he said. Wired’s science blog network hosts 10 other bloggers, and has more than 14,400 followers on Twitter. Wired attracts an average of 76,271,080 page views per month, according to its website. Bhatia began his blogging career under the influence of popular science books and Discover magazine blogs like Ed Yong’s “Not Exactly Rocket Science” and Carl Zimmer’s “The Loom.” The blogs exposed Bhatia to biology, a field he said he knew little about during his time as a graduate student. This influenced him to shift his research focus toward how natural selection impacts different organisms. “The idea really is to show people that there’s neat science behind seemingly mundane things,” he said. Bhatia said the desire to communicate science from daily experiences grew out of the philosophy he embraced while teaching at Rutgers and earning his graduate degree. “Science isn’t dry textbook stuff. … [I] try and make connections between fields, and connect class-

room learning to real life experiences,” he said. In the spring of 2013, he taught a course that required students to blog under the guidance of physics faculty members Michael Manhart, Deepak Iyer, Simon Knapen and Bhatia himself. He said the most important part about incorporating blogging into his class was the feedback students received from their peers and instructors. “Some of the students were really able to take full advantage of the blog medium and demonstrate creativity,” he said. Bhatia said academics have traditionally attached a negative stigma to blogging, but scientists and active bloggers like Sean Carroll and Jonathon Eisen are proving otherwise. He said most science bloggers write because it is fun and rewarding to connect to an audience. “After all, we’re all sharing the cost of science through our taxes, so it’s only fair that more people should share the intellectual rewards that come out of it,” he said. This semester, Bhatia extended his outreach as an educator as well. At the beginning of September, he began his position as the associate director of engineering education at the Council on Science and Technology at Princeton University.

Aatish Bhatia, an alumnus of the Rutgers doctoral physics program, combines his love of research with his passion for writing on his scientific blog. NISHA DATT / PHOTO EDITOR The council’s mission is to ensure all of the university’s students can think like scientists, according to its website. The council focuses

on humanities and social sciences majors especially. “We want people to care about [science],” he said. 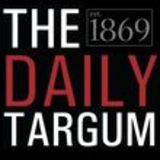