Wish to Wash with Rain Catalogue 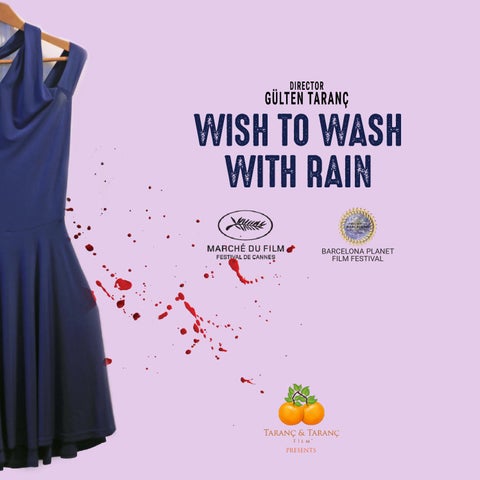 Evidence suggests that in Turkey at least three women are murdered by their husbands, ex-husbands or ex-boyfriends every day. Four out of ten women suffer physical violence from their husbands or partners. The movie, â&amp;#x20AC;&amp;#x153;Wish To Wash With Rainâ&amp;#x20AC;?, looks at life through the eyes of those left behind when women are murdered.

The story of Gamze illustrates that the victims in women murders are not only those murdered. In the story, the anger, loneliness, despair and longings of 15-year-old Gamze are presented from a fresh perspective. Now in her mid-30s, Hale (named Gamze when she was a child) begins to open the doors of her past which, until now, she has kept firmly closed. The change comes following the surprise proposal of her boyfriend Engin. It is hard for Hale to be human, to love other people and truly be herself. As Hale slowly begins to confront her past, so she becomes a warmer person. Neither the rain, nor Engin can erase the past; but Hale can overcome her past by facing up her childhood as Gamze.

Gamze was subjected to domestic violence during her adolescence period. During this period, while Gamze’s only concern should have been her singing, after her father killed her mother, she started taking up life alone.. Gamze couldn’t receive any kindness even from her beloved teacher Selin through her loneliness. That’s why she changes her name to Hale. Because even though it is believed that Hale is the head angel, in reality like all angels she doesn’t exist. Hale becomes a realist after Fazilet’s death. Hale has some controversies. She doesn’t want a man like her father Yilmaz in her life but she doesn’t see a naive man as a real man. He hates her father so much that when she sings we wears eye contacts just to cover her eye color which she inherited from her father. Hale’s affection problem is not just for Engin, it is for everything. Life turned her into a soulless, cold woman. She even couldn’t love the cat that Engin forcefully brought home. But with the second change she will go through she gets a second cat herself. It is hard for Hale to be human, to love other people and truly be herself. As Hale started to face her past slowly, she starts to become a more warm person. Neither the rains, nor Engin can erase the past. Hale would get over her past with facing her childhood Gamze..

In our cinema, women are not being told about enough and the media and the television are polluting our subconscious with products that support violence against women. My main goal both in my short films and my film “Wish To Wash With Rain” has been to raise awareness for women’s issues and to express this awareness in a different way. In my film project, “Wish To Wash With Rain”, I would like to handle the events that happen to

my characters in a naive way and reveal some innovative ideas in form and content to create a new aesthetic language without resorting to melodrama patterns and agitation. I will try a new form by showing the different periods in our character’s life to the audience in the same space and creating an intertwined time frame, instead of using the “flashback” expression that has been used so extensively until now. I believe that these jumps in time and this new time frame that is created will also serve the content in the name of helping create a present time in which we can witness our character’s past while watching the present time and revealing how many people’s lives a woman’s murder affects while challenging the possibilities of expression in cinema. Female characters in our cinema so far have waited for a Prince Charming to rescue them. Hale, unlike these women, goes through change, a transformation by looking into herself, not with the man that comes into her life, because the biggest change is what happens inside people. Engin, instead of putting the woman he loves into a mold, finds it in himself to change and mature for Hale. The fact that Gamze (Hale’s childhood) holds on to life by being so involved in music reveals the power of art. Taking a woman’s murder that perhaps we would read on the third page news on the big screen by taking advantage of the possibilities of art in the name of creating awareness in the audience through a new means of expression and to get people thinking about this issue is my most important objective.

The songs in the movie are composed by t he director Gülten Taranç in two years, with lyrics portraying the mood of the character. The Mediterranean atmosphere was supported with adding clarinet and cello to the rock compositions. The mother of the director Berrak Taranç, formed the unique music of the movie, sometimes by changing her daughter’s tune, and sometimes by rewriting the tunes from scratch. During this period, Berrak Taranç stayed in Hale’s and Gamze’s home and pulled an allnighter on the piano for days, trying to think about the characters mood. These tunes were listened by the actors during the filming of the movie to help the actors to show the mood of the characters.

She was born in Izmir in 1990. She went to Mexico as an exchange student with the Rotary Exchange Program in 2008. She took Spanish and Latin Dance classes at Universidad de Quintana Roo. She served as a jury member for the 18th MED Film Festival, Methexis Project organized in Italy in 2012. She competed in many domestic and international film festivals. In addition to her domestic and international exhibition which consisted of documentary photography, she is a documentary and short film director. She has been concerned with women’s issues since 2010 up and produced films about the problems women experience in Turkey. She graduated from Dokuz Eylul University Faculty of Fine Arts, Department of Film Design and Directing in 2013. She continues her graduate education in Marmara University Enstitute of Fine Arts, Department of Cinema and Television. She does freelance work in the film and advertising industries. In 2015 she founded Taranç and Taranç film production company.

A solid script. Tiny pieces fit together gradually and smoothly just like a puzzle resembling meditation. A more impressive expression is achieved without exploiting the melodramatic aspect of the subject. Comic relief episodes like yoga lessons, satirical proposal scenes kind of whether-to-laugh-or-cry cases, the scene at which the act of protest performed in fish costumes turns from a cartoonish mood into a political declaration and even the prison scene at which the father shaves cleanly to obtain a reduction in penalty...In addition, the rhythm is very temperate. Music is also very good. Cameos are great.

The management of actors and actresses is quite good and actors and actresses are successful. They become one with their characters without exaggerating or becoming banal. Additionally, they are reserved. As if they weighed the audience in a sense. In other words, they have a secret to tell, but they are not sure whether to tell it. It is a great revolution for women. As a result the search for the self, the movie managed to lead to catharsis (In general, female characters fail to develop during movies in our cinema industry. They always remain the same.)

Filled with wonder, I watched the movie without any sign of boredom at all. The relation between and the construction of woman and her youth is well-established. The movie’s sincerity is penetrating. The shooting of movies should be maintained without being stranded by criticisms, and preferences at festivals. It is good that the director abstains from falling into traps of art. In other words, if she had shot the movie with less dialogues and in darker ambiance, she would have increased her chance, but would have been less sincere.

At her first attempt of feature-length movie, she dealt with the issue without shouting in an assertive manner and without agitation and propaganda in the framework of usual simplicity and maturity and in consideration of filmotographic technique with aesthetical concerns. She discussed a current and touching problem from a feminine perspective in a very sensitive, resistant and optimist manner in a quest for solution. The movie has a contemporary atmosphere. As an artist and intellectual, I felt respect towards this piece of art as a result of the incorporation of actuality, localness and humanity problems into movie in such a maturely constructed language and the achievement of this incorporation without talking big and dogmatizing.

A movie that demonstrates the value of cinematic art and artist in Izmir... A great editing, marvelous script, striking end, original music, societal subject and beautiful Izmir with its city center and villages... Songs that enhance the subject as dispersed between stories and put the audience at ease like in a movie by Fernando Solanas, stories overlapping stunningly like in a movie by Alejandro González Iñárritu and the fantastic encounter taking place in the forest like in a movie by Guillermo del Toro... The meeting of intelligence and art in the framework of societal concern... A movie, each frame of which features diligence and hard work... The most interesting part is that it is the director’s first feature-length movie. I congratulate the Taranç family, particularly Gülten Taranç. I look forward to the second movie by Taranç with excitement and patience.

“It is very hard for a movie dealing with human values to be a success, if it fails to treat the audience sincerely. “Wish to Wash with Rain” is a sincere, appealing and good movie full of human emotions and thoughts, which makes the audience focused on the screen compellingly. To expect more of a director who shoots her first feature-length movie at her twenties would be unfair.”

Prof.Dr Oğuz ADANIR/Academician, Writer I watched your movie. You have done a good job in your first movie. Thank you for that. The message given by the movie is the most critical element. The message on the oppression and murder of women and on the nature is of great importance. I congratulate you for dealing with such a subject. Just keep it going. Particularly under hard conditions, even shooting a movie is an act of heroism. I congratulate you for your bravery and all those involved in this effort (your family).

Wish to Wash with Rain Catalogue

The movie, Wish To Wash With Rain, looks at life through the eyes of those left behind when women are murdered. The story of Gamze illustrates that the victims in women murders are not only those murdered. In the story, the anger, loneliness, despair and longings of 15-year-old Gamze are presented from a fresh perspective. Now in her mid-30s, Hale (named Gamze when she was a child) begins to open the doors of her past which, until now, she has kept firmly closed. The change comes following the surprise proposal of her boyfriend Engin. It is hard for Hale to be human, to love other people and truly be herself. As Hale slowly begins to confront her past, so she becomes a warmer person. Neither the rain, nor Engin can erase the past; but Hale can overcome her past by facing up her childhood as Gamze.