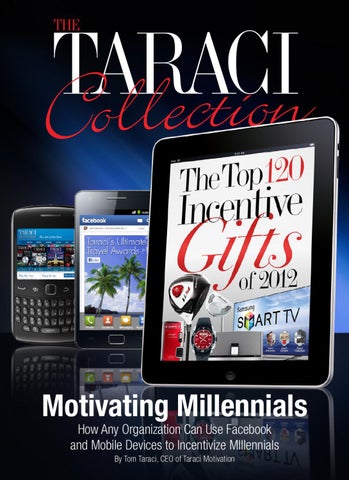 Motivating Millennials How Any Organization Can Use Facebook and Mobile Devices to Incentivize MIllennials By Tom Taraci, CEO of Taraci Motivation

Contents Dear Taraci Collection Client, I am proud to introduce you to the tenth edition of the Taraci Collection, our annual compendium of the best products available for incentive and recognition programs, published by my company TARACI MOTIVATION. We have selected items from the world’s most prestigious brands: Sony, Apple, Canon, Mitsubishi, Samsung, Callaway, Panasonic, Bose, Baume &amp; Mercier, Viking, and many others, to create our most exciting collection ever. Facebook: The Single Most Powerful Tool Ever Developed for the Incentive Marketing Industry We are living through an extraordinary time as the rapid development of social media provides an unprecedented outlet for communication, the proliferation of ideas and the opportunity for community building. If you have followed the phenomenal growth of Facebook, you have seen its influence on the business world increasing exponentially on a daily basis. At the very core of its functionality and the origin of its birth, facebook is about connecting a face with a name. When launching on Facebook, companies have the unique opportunity to connect with and introduce their audiences to the face of their brand or company. Now, for the first time, your company can host a corporate recognition or incentive program on facebook through our revolutionary app, Taraci Social MediaMgr™ . Taraci Social MediaMgr™ and Employee Motivation Taraci Motivation has developed the first incentive platform which will give corporations the ability to run their incentive programs through their Facebook page and also employ other social media tools including mobile. This app has many advantages over traditional incentive platforms: • Utilizing facebook for incentive programs offers the opportunity to explain, communicate and achieve corporate goals in a much greater fashion than traditional incentive tools.

• Taraci Social MediaMgr™ gives management the ability to provide continual updates and establish a two-way dialogue with the award winner community. • Taraci Social MediaMgr™ empowers employees by asking them to participate in the corporate page. •  The social component of the program greatly enhances the sense of community and therefore builds employee engagement, the fundamental purpose of any incentive/recognition program. Global Rewards Platform Adding to our already effective global platform, our strengthened international network of partners has given Taraci Motivation an unsurpassed ability to design and execute a worldwide incentive solution. We can now run programs in Europe, the Pacific Rim, South Africa, Mexico, South America, Mexico, Canada, and of course, the United States. Award merchandise is shipped in-country and in-region greatly reducing shipping and duty costs. In addition to our global fulfillment capability, our MotivationMgr™ software can build an online catalog in any language. Combined with in-country customer service, there has never been a more universal solution for a global rewards program. If you would like to learn what it takes to run a state-of-the-art motivation program, just call or email me to schedule a brief webinar “Secrets of an Effective Incentive Program”. Best Regards,

Working with our global network and using our exclusive MotivationMgr™ software, we can design a program which will allow you to award recognition gifts of equal value and fulfill them in every continent.

Taraci’s Global Rewards Platform is a multilingual rewards portal running in all of the world’s major languages including but not limited to: • English • Indian(Hindi, Bengali..etc) • Chinese • Thai • Japanese • Bahasa • Korean • All European Languages

If your company has struggled executing your motivation programs on a global level, contact Taraci Motivation at 212-243-7733 and ask to speak with Tom Taraci or David Groveman, New Business Development Manager, about how we can make our system work for you.

nless you’ve been living under a rock, you’ve probably been inundated with news about Facebook’s recent 5 billion dollar IPO.

that reward out-of office habits (think wellness initiatives), are a perfect fit -- as users can participate while jogging on the treadmill or eating a healthy meal.

But if you’re like a lot of employers, you’ve had Facebook fatigue for a while. The fact that your millennial employees are logged on to the site during work hours drives you crazy–so crazy that you’ve considered blocking it.

2. Praises them Publicly Millennials crave compliments and need reassurance that they are performing well, according to Barbara Keats, a management professor at the W.P. Carey School of Business. Remember, as kids, they earned trophy after trophy for “participation,” according to Knowledge Wharton High School. So it’s no surprise to learn that they are hungry for positive feedback. But like anything else in their lives, if it isn’t posted on their wall, it’s almost like it didn’t happen at all. In other words, accolades that can be viewed by their colleagues will pack twice the punch. Facebook makes it painless to commend and reward your employees publicly.

No Facebook! No Deal! According to Cisco’s second annual Connected World Technology Report, which surveyed 1,400 college students age 18 to 23 and 1,400 young professionals under 30 across 14 countries, the ability to use social media, mobile devices, and the Internet more freely in the workplace can influence job choice—sometimes even more than salary. Here’s the bottom line: Millennials long to work for cool companies, and blocking Facebook is the fastest way to make your company look like a dinosaur. In fact, 40 percent of college students and 45 percent of young professionals said they would accept lower-paying jobs in exchange for those freedoms. You read that right. Less money! It’s clear that it is time to stop thinking of Facebook as productivity’s number one enemy, and start thinking of it as the answer to engaging Generation Y. Here are four reasons why Facebook is the secret to motivating Millennials:

Millennial fish, as we know, are swimming on Facebook. In fact, Price Waterhouse Cooper reports that 92 percent of United States’ Millennials belong to an online social network. The data is so overwhelming that it’s critical to view the Facebook/millenial connection as a no-brainer. That’s why facebook is the perfect home for your next program.

4. Increases Value of Rewards Exponentially By seeing what their peers have earned and enjoyed, the rewards that you offer will grow in perceived value – and Millennial staffers will be more motivated than ever to rack them up. A recent study by Bazaarvoice reported that eight out of 10 Millennials value user-generated content above all other marketing materials. In fact, user feedback and reviews influence them so much that they simply will not purchase big-ticket items without consulting those resources first. With a Facebook-based incentive program, employees won’t just read about the volunteer trip to Cambodia that they can earn; they’ll also be able to browse testimonials from people who’ve experienced the trip first hand and loved it.

Facebook has a big advantage over external Web sites with log-ins that may be forgotten, or old-fashioned rewards catalogs that may never get paged through. On Facebook, it’s all right there, easily accessed and updated in real time. Plus, since Gen Y tends to surf via smart phone, programs

In short, you know for a fact that your Millennial workforce loves Facebook. So why waste another minute bemoaning it? Instead, treat Facebook like the opportunity that it is: use it to boost productivity, foster loyalty and incentivize your employees.

1. Reaches Millennials Where They Are If you’ve tried traditional corporate incentive programs, you know that getting employees to use them (beyond the initial sign up) is half the battle. The answer, according to Jim Nichols of Forbes.com, is to “fish where the fish are.”

3. Provides a Group Infrastructure Millennials love a collaborative atmosphere and thrive when allowed to work in groups. They don’t mind sharing the glory of achieving things via team effort. With a Facebookbased incentive program, you can easily gather employees into teams, and allow them the option of working toward group rewards. Doing so will strengthen existing group ties, build new ones, and reinforce the work environment that Millennials consistently say they want.

This included the Dinah Shore Golf Tournament, and Team Nabisco, a celebrity athlete department that was used to promote and support the brands. Tom also worked in sales for National Presto Industries and Dow Chemical, as well as in marketing and promotions at National Distillers. Tom received his B.B.A. from C.C.N.Y. (at the time known as the Harvard of the Proletariat), and he attended the graduate school for marketing at St. John’s University.

With Taraci MotivationMgr™, we will create a customized online solution for your incentive or recognition programs, providing:

The Taraci Collection Offers the Best-of-the-Best Taraci Motivation specializes in developing programs that offer the best-of-the-best incentive products and services. We publish The Taraci Collection annually, and it has quickly become the industry’s definitive hot list featuring the must-have items of the year. We feature brands like Apple, Sony, Bose, and Samsung, among others. You’ll discover premier electronics and cameras,

specialty home products, custom clothing, travel packages, as well as must-have accessories, including luggage, jewelry and watches. As a client of Taraci Motivation, you will be able to select from this unique collection of products and services. In addition, our extensive network of contacts allows us to easily secure additional products and services that you may wish to include in your program.

Global Organizations Turn to Taraci Motivation Multinational corporations traditionally have 30 percent of their workforces overseas, creating the pressing and difficult task of designing and implementing an equitable and effective worldwide recognition system. To help our clients build international motivational programs, we have built a global network designed to make our programs fit the needs of our clients wherever they are located.

We can ship basically anywhere, translate programs into multiple languages, and customize the gifts to appeal to their employees in their particular region of the world.

I am proud to introduce you to the tenth edition of the Taraci Collection, our annual compendium of the best products available for incentive and recognition programs, published by my company TARACI MOTIVATION. We have selected items from the world’s most prestigious brands: Sony, Apple, Canon, Mitsubishi, Samsung, Callaway, Panasonic, Bose, Baume & Mercier, Viking, and many others to create our most exciting collection ever.