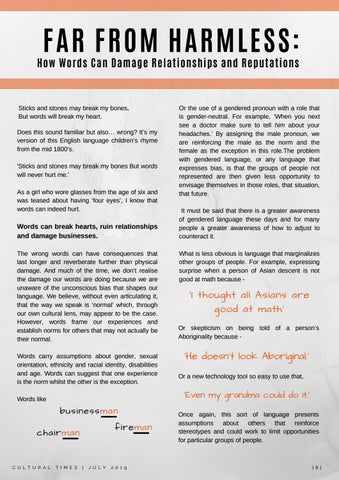 How Words Can Damage Relationships and Reputations

Words can break hearts, ruin relationships and damage businesses. The wrong words can have consequences that last longer and reverberate further than physical damage. And much of the time, we don’t realise the damage our words are doing because we are unaware of the unconscious bias that shapes our language. We believe, without even articulating it, that the way we speak is ‘normal’ which, through our own cultural lens, may appear to be the case. However, words frame our experiences and establish norms for others that may not actually be their normal. Words carry assumptions about gender, sexual orientation, ethnicity and racial identity, disabilities and age. Words can suggest that one experience is the norm whilst the other is the exception.

‘He doesn’t look Aboriginal.’ Or a new technology tool so easy to use that,

‘Even my grandma could do it.’

Or the use of a gendered pronoun with a role that is gender-neutral. For example, ‘When you next see a doctor make sure to tell him about your headaches.’ By assigning the male pronoun, we are reinforcing the male as the norm and the female as the exception in this role.The problem with gendered language, or any language that expresses bias, is that the groups of people not represented are then given less opportunity to envisage themselves in those roles, that situation, that future.

Once again, this sort of language presents assumptions about others that reinforce stereotypes and could work to limit opportunities for particular groups of people. A magazine for managers and aspiring leaders around the globe. The magazine contains practical and inspiring articles on all things cultural...

A magazine for managers and aspiring leaders around the globe. The magazine contains practical and inspiring articles on all things cultural...