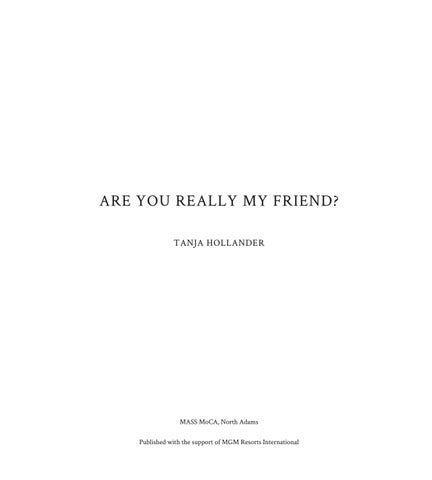 ARE YOU REALLY MY FRIEND? TANJA HOLLANDER

For my nephew, Henry Wilde Hollander As a newborn, he rarely cried, but when he did, he was comforted by peering out a window—his little feet resting on the sill and his nose pressed against the glass. As a one year old, he picked up his purple guitar to write a song with me about our favorite activity— blowing bubbles—which he aptly named The Bubbles Song. Shortly after his second birthday, we went for a ride on a Ferris wheel. “What do you see, Henry?” I asked, and he exclaimed, “We’re in the sky, whoa! Look, look, look at that. Look, look at all the cars! We’re in the sky! We’re in the sky!”

On New Year’s Eve 2010, Tanja Hollander was in her kitchen in Auburn, Maine, simultaneously writing to two friends: one deployed in Afghanistan, with whom she corresponded via pencil on paper; the other working in Jakarta, to whom she sent a Facebook message. In this moment, between the tangible and digital, Hollander decided to photograph all 626 of her Facebook friends in real life. The journey began in Washington, DC, in March 2011 and ended in Tel Aviv, Israel, on June 4, 2016. During this time, Hollander immersed herself in the lives and communities of both close friends and virtual strangers, all the while sating her curiosity about the differences between the analogue and digital lives we lead. Are you really my friend? is a vast project featuring 430 portraits, photographs of landscapes Hollander visited, snapshots and videos of what she experienced along the way, images of travel ephemera, a short documentary, and an interactive Post-it note project. For the portraits, Hollander set up traditional sittings with a Hasselblad medium-format film camera; however, she also documented everything using her pointand-shoot camera and iPhone. The utilization of film, and shooting with only available light, was deliberate, allowing her to travel lightly and unobtrusively. Much as in real life, some images are drenched in sunlight, while others are barely lit by a single ceiling-fan light bulb on a gloomy day. Additionally, Hollander scanned each piece of ephemera gleaned over the past six years against a colored backdrop. No image, no object, no experience is taken for granted, an ethos that filtered into the making of this project. It was important to Hollander that viewers should understand her entire experience—a stipulation of the social media age. AYRMF takes a defiant stand against the art world, showing that a careful selection of portraits is perhaps no more important than an iPhone snapshot, a scanned boarding pass, or travel spreadsheet. In March 2017, an exhibition of the finished project opened at MASS MoCA. Throughout the run of the exhibition, Hollander’s friends have visited and taken pictures in front of their portraits—children have grown up, people have passed away, and we can feel time moving forward like a living Facebook wall. Now, this book is the latest iteration of the project. In it, she articulates the challenges and pleasures of integrating social media into her creative practice—including how to navigate the complexities of maintaining a private life while engaged in such a public project. Short essays by contributors Elisa Albert, Jacoba Urist, and Wendy Richmond deepen and extend these themes: Albert by investigating the potentially ephemeral nature of friendship in a digital age, Urist by analyzing the ways in which class disparity shapes our daily interactions, and Richmond by celebrating the real and lasting friendships collected along the way. Hollander’s own writings and documentation of the six-year project are dispersed throughout. During this venture, Hollander’s determination has been to lay everything bare, to remind us of the importance of friendship both in life and on line. She reminds us to collect the world on our own terms, to remember that a gas station egg sandwich is just as good as a French bakery croissant—and that while real friends may not exist, real friendship absolutely does. —Denise Markonish

“Why did you save your trash?” my assistant Brittany asks, after she’s spent weeks re-touching scans of travel ephemera: a map Lynn left for me detailing where to find her car in San Francisco; the lid to the cup of ramen noodles I bought, fighting a cold, when I was in Ghent to photograph Carl; a toothpick with Arabic writing from the flight to Kuala Lumpur to photograph Maury; a box that contained Plan B OneStep after a trip I’d rather not remember. After six years of working on Are you really my friend? I had over 100,000 images. Plus, an enormous archive of e-mail correspondence, text messages, Facebook posts and messages, Tweets, Instagrams, monthly mailing-list updates, blog posts, and notes on my phone, computer, and journals. I’d amassed tens of thousands of Post-it notes on friendship from third graders in the South Bronx to PhD candidates at MIT, and from many people all over the world in between. How to edit it down? Looking at the Post-it notes, I identified these recurring key words: Trust, Unconditional, Need, Make, Know, Judge. With those words in mind, I pulled images from the trips most important to me, and then stories to accompany the images. Some of the images are direct illustrations of text; others are looser interpretations. And I began to create just one of many new stories that have emerged from doing this project about friends, and friendship, and how we stay connected (or don’t). Colin lives in Los Angeles and calls when he is stuck in traffic. Jenny and I mostly text, a pdf of our conversations over the last five years is 706 pages long. Kio and I met on Instagram, a professional relationship that turned deeply personal. I was determined to make Hasan my friend after I discovered his work online. Little did I know, I would become friends with his wife, Grace, too! Jeff B is my favorite person to see art with when I’m in New York. Joe and Katie made me the godmother of their children, Winona and Delila. Every time I’m in a glass elevator, I text Wendy a video because it reminds me of the afternoon we rode in one together. Emily sends thoughtful cards. Shara feeds me a delicious meal. Gideon always greets me with the middle finger. Barry hides cash in my camera bag. All these people, all these images, all these notes—they’re all relevant. We weave in and out of each other’s lives at different times, for different reasons, and that’s okay. Friendship is messy and complex, rewarding and hilarious, genuine and fleeting. —Tanja Hollander

From: Tanja Hollander Subject: reflections Date: April 26, 2016 at 6:22 PM EDT To: Robin Greenspun So whatâ&#x20AC;&#x2122;s the difference between need and desire, between hope and faith? Texas was the first time I felt alone. But did I need someone? I donâ&#x20AC;&#x2122;t know. Would it have been easier or better if there was someone else there with me, sharing the experience? Probably. Is that what friendship is? What love is? Being alone, but not lonely.

I wish I could photograph the smell of LA after it rains. #california

It takes me a couple of hours to drive from Oshkosh to Mountain, on a detour to meet friends I only know through social media. As I’m pulling onto their road, they call to say they’ve broken down, and they’ll be a couple of hours behind me, so I should make myself at home. I get out of the car. The sky is full of stars. I enter the key code and open the door to a beautiful hand-built cabin. I poke around for a few minutes, then decide to have a nice long bath. Running the bath, I hear a knock at the door. I’m not undressed yet, so I answer it. A friendly gentleman with a little dog comes in—he introduces himself as Craig and the dog as Peanut. We chat for a bit and he leaves. As I’m lying in the tub, I realize I’m alone in rural Wisconsin and I just let a stranger into a stranger’s house.

I stay with Ed and Dr. Mary so much they get me a bathrobe.

I’m standing next to an older black gentleman who’s looking at a Lewis Hine photograph of a little girl working in a factory. Two girls, actually—he points out another one in the background. He initially mistakes me for his family, but then says to me anyway, “I need my grandson to see this. To see the importance of this photograph. To see the dangerous jobs children had to do.” #artinstitute #chicago

“So your job basically is to go around taking pictures of people doing nothing.” —Elise, age nine

Some people choose to keep the post-Katrina spray painted “X” that lists dates and the number of dead on houses they are clearly living in. Like a scar you don’t want to hide. #neworleans

What I learned today: pulling over on the side of the frozen highway to photograph is not safe, and driving across country to make portraits has gotten me excited about landscapes again.

Perfect beach day—minus the smell, dead fish and color of the “water.” What a depressingly beautiful place. #saltonsea

From: Scott Toney Subject: RE: you really are my FB friend Date: June 22, 2011 at 12:50:36 AM EDT To: Tanja Hollander Hey Tanja...hope you are well. If you are coming out my way (to see your sister or something), I am living in Westford and on July 24th there is a bike-a-thon in my nieceâ&#x20AC;&#x2122;s name to raise awareness about domestic violence. It is in honor of my niece, Olivia, who was murdered last year by her father. Might be a bit more somber than you are looking for, but it is a slice of life, I guess. Maybe I will see you anyway along the way? Best to you on your project. Are you really my friend? Chapter 1 (preview)

In 2011, artist Tanja Hollander set out to photograph her 626 Facebook friends. For six years, she crisscrossed the United States and travel...

Are you really my friend? Chapter 1 (preview)

In 2011, artist Tanja Hollander set out to photograph her 626 Facebook friends. For six years, she crisscrossed the United States and travel...