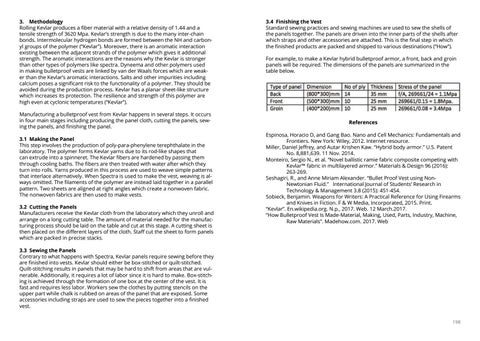 3. Methodology Rolling Kevlar produces a fiber material with a relative density of 1.44 and a tensile strength of 3620 Mpa. Kevlar’s strength is due to the many inter-chain bonds. Intermolecular hydrogen bonds are formed between the NH and carbonyl groups of the polymer (“Kevlar”). Moreover, there is an aromatic interaction existing between the adjacent strands of the polymer which gives it additional strength. The aromatic interactions are the reasons why the Kevlar is stronger than other types of polymers like spectra. Dyneema and other polymers used in making bulletproof vests are linked by van der Waals forces which are weaker than the Kevlar’s aromatic interactions. Salts and other impurities including calcium poses a significant risk to the functionality of a polymer. They should be avoided during the production process. Kevlar has a planar sheet-like structure which increases its protection. The resilience and strength of this polymer are high even at cyclonic temperatures (“Kevlar”). Manufacturing a bulletproof vest from Kevlar happens in several steps. It occurs in four main stages including producing the panel cloth, cutting the panels, sewing the panels, and finishing the panel. 3.1 Making the Panel This step involves the production of poly-para-phenylene terephthalate in the laboratory. The polymer forms Kevlar yarns due to its rod-like shapes that can extrude into a spinneret. The Kevlar fibers are hardened by passing them through cooling baths. The fibers are then treated with water after which they turn into rolls. Yarns produced in this process are used to weave simple patterns that interlace alternatively. When Spectra is used to make the vest, weaving is always omitted. The filaments of the polymer are instead laid together in a parallel pattern. Two sheets are aligned at right angles which create a nonwoven fabric. The nonwoven fabrics are then used to make vests. 3.2 Cutting the Panels Manufacturers receive the Kevlar cloth from the laboratory which they unroll and arrange on a long cutting table. The amount of material needed for the manufacturing process should be laid on the table and cut at this stage. A cutting sheet is then placed on the different layers of the cloth. Staff cut the sheet to form panels which are packed in precise stacks.

3.4 Finishing the Vest Standard sewing practices and sewing machines are used to sew the shells of the panels together. The panels are driven into the inner parts of the shells after which straps and other accessories are attached. This is the final step in which the finished products are packed and shipped to various destinations (“How”). For example, to make a Kevlar hybrid bulletproof armor, a front, back and groin panels will be required. The dimensions of the panels are summarized in the table below.

3.3 Sewing the Panels Contrary to what happens with Spectra, Kevlar panels require sewing before they are finished into vests. Kevlar should either be box-stitched or quilt-stitched. Quilt-stitching results in panels that may be hard to shift from areas that are vulnerable. Additionally, it requires a lot of labor since it is hard to make. Box-stitching is achieved through the formation of one box at the center of the vest. It is fast and requires less labor. Workers sew the clothes by putting stencils on the upper part while chalk is rubbed on areas of the panel that are exposed. Some accessories including straps are used to sew the pieces together into a finished vest. 198 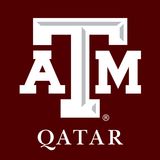