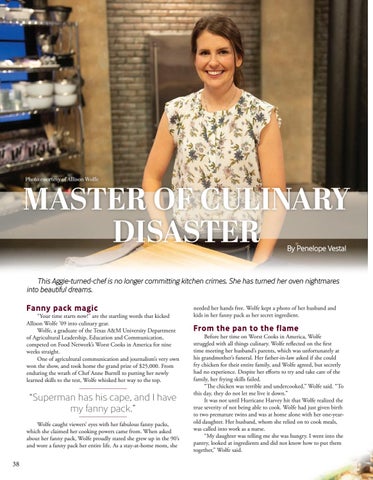 This Aggie-turned-chef is no longer committing kitchen crimes. She has turned her oven nightmares into beautiful dreams.

“Your time starts now!” are the startling words that kicked Allison Wolfe ’09 into culinary gear. Wolfe, a graduate of the Texas A&amp;M University Department of Agricultural Leadership, Education and Communication, competed on Food Network’s Worst Cooks in America for nine weeks straight. One of agricultural communication and journalism’s very own won the show, and took home the grand prize of $25,000. From enduring the wrath of Chef Anne Burrell to putting her newly learned skills to the test, Wolfe whisked her way to the top.

“Superman has his cape, and I have my fanny pack.” Wolfe caught viewers’ eyes with her fabulous fanny packs, which she claimed her cooking powers came from. When asked about her fanny pack, Wolfe proudly stated she grew up in the 90’s and wore a fanny pack her entire life. As a stay-at-home mom, she

needed her hands free. Wolfe kept a photo of her husband and kids in her fanny pack as her secret ingredient.

From the pan to the flame

Before her time on Worst Cooks in America, Wolfe struggled with all things culinary. Wolfe reflected on the first time meeting her husband’s parents, which was unfortunately at his grandmother’s funeral. Her father-in-law asked if she could fry chicken for their entire family, and Wolfe agreed, but secretly had no experience. Despite her efforts to try and take care of the family, her frying skills failed. “The chicken was terrible and undercooked,” Wolfe said. “To this day, they do not let me live it down.” It was not until Hurricane Harvey hit that Wolfe realized the true severity of not being able to cook. Wolfe had just given birth to two premature twins and was at home alone with her one-yearold daughter. Her husband, whom she relied on to cook meals, was called into work as a nurse. “My daughter was telling me she was hungry. I went into the pantry, looked at ingredients and did not know how to put them together,” Wolfe said.