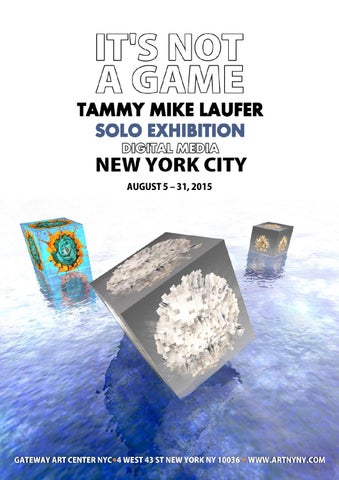 Tammy Mike Laufer presents "Cybernetic Balls,” a series of surrealistic digital works based on images in 3D: people, landscape, and the relationship between them. We need to protect our planet. It’s not a game. This is our life on earth.

Cybernetics, a concept used in the field of applied mathematics, deals with communication between human beings, control systems, organizations, and machines. In Israel, which is world advanced in computer applications, technology and art go together hand in hand. The series presented here connects with this concept in two ways: the series combines man, machine, and cyberspace; and also, the series is created with man-made technology. The technological revolution influenced art from its very beginning and artistic conventions were being constantly challenged, and the result was not easily accepted. New movements in contemporary art, such as Expressionism and Cubism, were received with endless suspicion and bitter criticism in their time. Computers, like cameras before them in their 2D space, allow the artist to paint and sculpt in a virtual 3D space. My art is created using these advanced tools which add a new complexity and many more creative possibilities to the former limitations of 2D space. A computer is a tool that allows endless possibilities in a "clean" environment; no more studios, no more materials on the floor, paint-brushes, tools and fabrics everywhere. Everything is in the computer. I have been creating art on my computer for two decades, first as a designer and then art director developing interfaces. designing characters for computer games, educational software, and Hebrew fonts. With the technological developments that came afterward I began to research three-dimensional art.

The software I use has been with me from its very beginning. I was a beta-tester, and then I began to research the artistic capabilities of the program. This program has since developed into the leading software for artists, it allows every painter or sculptor to create with an endless variety of materials. The technological revolution gave the artist a brand new "tool" with which to transmit and share new ideas that have not been possible before. The computer is my artistic tool, it allows me to create in a wide spectrum of materials like found in reality in endless space. A computer does not produce art, it is the hand that holds the digital pen and paints on the digital canvas that receives the instruction from the mind of the artist. The ideas of the artist are then applied to the computer. Any art can be created with any tool, traditional or untraditional, but the computer allows new vistas and realities to be expressed which can entertain, stretch the mind, be serious or fun, and appreciated for the application of creativity to complex tools now available and also developing. I was greatly influenced by the Surrealists such as Mauritz Cornelius Escher, Samuel Bak, Salvador Dalí and René Magritte. In this series I wish to present a new take on the landscape of our world. I create a series of surrealistic balls made of 3D human images, cars, and metals. These surrealistic balls express the complexity of the Earth we live on. The series is complex and rich in texture, and becomes an environmental sculpture - for your eyes only, and which can be printed in different sizes, colors, and materials in limited edition format and portfolios for enjoyment and as part of a collection in this newer art age.

ABOUT THE ARTIST Tammy Mike Laufer is one of the first artists who converted the traditional artistic practice in painting and design and began to work with a mouse and a digital pen. Laufer comes from the world of computer games development and learning software. She has developed 3D characters and user interfaces in the past, and this is also reflected in her art, the uniqueness of which is the technique of creatively imaging the threedimensional digital painting.

Tammy Mike Laufer is a contemporary digital artist living and working in Israel. She is a graduate from the â&#x20AC;&#x2DC;Technionâ&#x20AC;&#x2122; Israel Institute for Technology extension. Department of Graphic Design, and continuing education program for designers at Sivan College, Tel Aviv. She has been engaged with Digital Media for two decades. Tammy Mike Laufer's digital media works were exhibited in Museums, art projects in places such as Italy (53 Venice Biennale), Greece, Japan, the US, Portugal, Latvia and Israel. Her works are in private and public collections.

The 44 DEGREES, a free online art magazine, was established in 2013 by Tammy Mike Laufer dedicated to the promotion of contemporary Israeli artists working in different formats, such as digital media, painting, sculpting, and mixed media, with each issue focusing on a different theme. 44 DEGREES is also archived by the Israel Museum in Jerusalem and Tel Aviv Museum Library. Ms. Mike Laufer is the sole editor, art director, curator, designer and producer of the non-profit magazine website. Ms. Laufer does her work as a volunteer, with the sole purpose of promoting the Israeli art community, and many hundreds of artists have been showcased in the last few years. www.44degrees.net tamylauf@netvision.net.il

IT'S NOT A GAME

Ball - Turbulence in the ocean-40X40CM