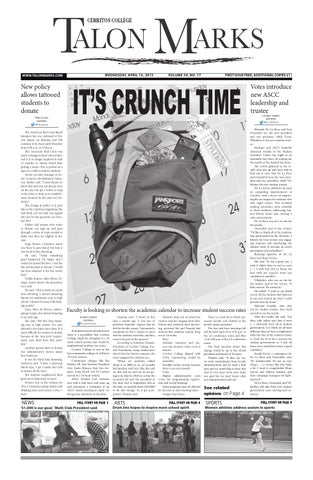 The American Red Cross blood donation bus was stationed at Falcon Square on Monday and will continue to be there until Thursday from 8:30 a.m. to 7:30 p.m. The American Red Cross has made a change in their tattoo policy and it is no longer required to wait 12 months to donate blood after getting a tattoo. This is posted on a sign on a table to inform students. Senior account manager of donor resources development Guinevere Endter said, “I want donors to know that now you can donate even on the day you get a tattoo as long as the tattoo is done at an establishment licensed by the state of California.” The change in policy is in part due to the California legislation the Safe Body Art Act that was signed into law by the governor on October 2011. Endter said anyone who wants to donate can sign up and goes through a series of steps needed to make sure they are eligible to donate. Jorge Ramos a business major was there to give blood. For him it was his first time donating. He said, “Today something good happened. I’m happy and I wanted to spread the love. I saw the bus and decided to donate. I would not have donated if the bus wasn’t here.” Unlike Ramos, Julio Flores, biology major, knows the procedure very well. He said, “This is about my tenth time donating. I started [donating blood] my sophomore year in high school. I donate because I like helping people.” Irene Nino de Rivera, anthropology major, also started donating at an early age. She said, “My first time donating was in high school. I’ve only donated a few times since then. It is more difficult for women to donate because of the iron level requirement, men don’t have that problem.” Another person there to donate was administrative justice major Jose Gutierrez. It was his third time donating. Gutierrez said, “I have a universal blood type, I get e-mails and calls to donate all the time.” The students emphasized their goal was to help those in need. Donors stay in the canteen for 10 to 15 minutes eating cookies and drinking juice and recieve a free tshirt.

If students haven’t already heard, there is a possibility that Cerritos College might be changing to a 16 week school session that would be implemented in about two years. Cerritos College is one of the last community colleges to still have 18 week sessions. Community colleges like Rio Hondo, Mt. San Antonio, Pasadena City, Santa Monica, East Los Angeles, Long Beach and El Camino moved to a 16 week system. ASCC Senator Luis Guzman met with a task force and came up and presented a resolution at an ASCC Senate meeting on April 1 to bring more attention to this plan.

Guzman said, “I heard of this idea a month ago, it was one of professor Namalas&#39; reports that he did for faculty senate, I presented a resolution in ASCC Senate to show that the students want this, and they want to be part of the process.” According to Solomon Namala, President of Cerritos College Faculty Foundation, many studies have shown that the shorter semester, the more engaged the students are. &quot;When we seriously talked about it in 2008 or so, we actually had another task force like this and we met and we said ok we are going to do this by 2010 or so but the recession hit and the president at the time said to implement this at the time we needed about $250,000 to do this change. So it got postponed,&quot; Namala said.

Students drop out of school for various reasons ranging from jobs, tuition and textbook rates increasing, personal life and Namala had noticed that students usually drop out at 14 weeks. Pros: Students retention and success rate increase when term is shorter Cerritos College aligned with CSUs, transferring would be smoother Possible winter session because there is an extra month Cons: Higher administrative costs (costs for programming registration and record keeping) Some programs may be affected by increase in class meeting times Longer class hours

There is a task force which represents faculty and Namala is the faculty union president. The two task force meetings left will be held April 29 at 4:30 p.m. at the LA conference room and May 13 at 4:30 p.m. at the LA conference room. The final decision about this change would be up to the school president and Board of Trustees. Namala said, “If they say yes, we want commitment from faculty administration and we need a firm date and we would like to have this start in two years from now, that’s our goal but we don’t know what our administration will say.&quot;

Eduardo De La Rosa and Ivan Oyarzabal are the new president and vice president, while Victor Villalobos is the new student trustee. Students and ASCC hopefuls clamored outside of the Student Activities Center last night at an unusually late hour, all waiting for the results of the student elections. The crowd gathered as the results were put up and were able to find out at once that De La Rosa and Oyarzabal were the new president and vice president, while Villalobos the new student trustee. De La Rosa’s platform focused on expanding improvements at Cerritos, with a focus on improving life on campus for students who take night classes. This included making counselors more available to those students, addressing limited library hours and creating a safer environment. De La Rosa was not on-site for the results. Oyarzabal said of the victory, &quot;I&#39;d like to thank all of the students that participated in the elections. I believe the true victory was engaging students and motivating the student body to become an active participant in local politics.” Running opposite of De La Rosa was Hope Garcia. She said, “It was a great run. I wish it didn’t have to end so soon […] I wish him [De La Rosa] the best with my respects from one candidate to another.” Villalobos, who was on site for the results, said of his victory, “It feels surreal. We earned it.” He added, “I want to say thank you to all the students that believed in me and trusted me that I could provide that for them.” Suleyma Castillo, who also ran for student trustee, also stuck around to see the results. After the results she said, “I’m okay with either way that it went […] obviously we’re all in student government, so I think we all have different ideas of how to implement what the role of the student trustee is. Each one of us has a passion for student government so I feel all three of us would have been a good candidate.” Joseph Fierro, a campaigner for De La Rosa and Oyarzabal, said, “It’s unbelievable. It’s not an easy thing […] a victory like this helps a lot. I want to congratulate Hope Garcia and Athena Sanchez and their campaign managers for fighting hard.” De La Rosa, Oyarzabal, and Villalobos will take their new student government seats starting next semester.

The April 15, 2015 issue of the Talon Marks student newspaper. 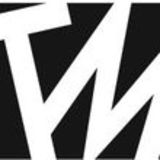