Mountains of the Sea - Preview 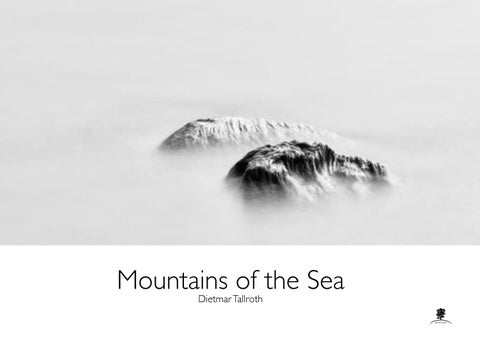 Mountains of the Sea Dietmar Tallroth

Mountains of the Sea Dietmar Tallroth

sheen. The many rocks and boulders are strewn across the shore and far out into the sea. Often the rocks are composed from diﬀerent materials than the shore itself and, indeed, the ice might have pushed them from their original place over long distances. They are in the truest sense “out of place”. The diﬀerences in material and varying patterns of erosion through waves, wind, rain and ice bestow a distinct individuality upon many of these rocks and in some of them sleeps a mountain, waiting to be seen. Viewing Stones and Rock Gardens The beauty of naturally shaped rocks has attracted people for a long time. Already during the Tang dynasty (618-907) in China so called viewing stones or scholar rocks (gongshi) were held in high regard. These rocks were often from soft limestone, in grotesque shapes, or perforated. As can be still seen today e.g. in the Lion Grove Garden in Suzhou they became important elements of the Chinese garden. The reverence for stones spread from China to both Korea (there called suseok) and Japan (there called suiseki).

Like many other influences coming from China, however, both the Chinese garden and the appreciation of stones underwent in Japan a transformation into specific Japanese art forms. Under the influence of both Shinto and Zen buddhism, stone and rock shapes used in suiseki displays became more angular and natural. Stones were now collected for their resemblance to larger landscape formations like mountains. This change in taste also influenced the development of the Japanese garden design. Rocks not only became prominent garden features, but like in suiseki were used to represent larger landscape features like islands, waterfalls and mountains. This development culminated during the Muromachi period (1336-1573) in creation of gardens entirely made from rocks and sand, the Japanese rock gardens (karesansui). In these gardens landscape was abstracted and condensed down to its rocky skeleton. Underlying both rock garden design and suiseki was the notion that one can see the whole in a fraction at small scale. As suiseki practitioners put it, the goal was “to see and feel nature on a scale as large as the entire universe through the viewing of a single stone”.

In Zen buddhism the circle (enso) stands for the universe and enlightenment. If the circle is incomplete, it indicates the path to enlightenment. Perfect circles occur very rarely in nature. Mostly it is our mind that forms the perfect shape from visual clues.

How Many Points Make a Circle?

This makes the stone circle an interesting metaphor for the process of perception. What we â&amp;#x20AC;&amp;#x153;seeâ&amp;#x20AC;? happens not only in our eyes but also in our mind. If we understand enlightenment as the insight into the true nature of reality, it is the moment, where our perception is perfectly aligned with reality. All illusions, merely produced by our mind, disappear and mind and reality are perfectly synchronised.

Right: Mountains of the Sea, Study I Kallahti, Helsinki, 2016

Mountains of the Sea is a photo essay about rock formations on the coast of Southern Finland. At the same time the photos are an investigation into self-similarity in nature. The fractal character of forms in nature is most often thought of as feature of plants and animals such as ferns and sea shells. But also large features like mountains are built from self-similar elements.

Dietmar Tallroth is a fine art photographer and writer living and working in Helsinki, Finland.

Mountains of the Sea - Preview