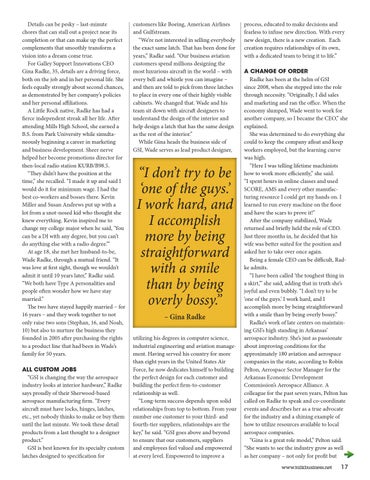 Details can be pesky – last-minute chores that can stall out a project near its completion or that can make up the perfect complements that smoothly transform a vision into a dream come true. For Galley Support Innovations CEO Gina Radke, 35, details are a driving force, both on the job and in her personal life. She feels equally strongly about second chances, as demonstrated by her company’s policies and her personal affiliations. A Little Rock native, Radke has had a fierce independent streak all her life. After attending Mills High School, she earned a B.S. from Park University while simultaneously beginning a career in marketing and business development. Sheer nerve helped her become promotions director for then-local radio station KURB/B98.5. “They didn’t have the position at the time,” she recalled. “I made it up and said I would do it for minimum wage. I had the best co-workers and bosses there. Kevin Miller and Susan Andrews put up with a lot from a snot-nosed kid who thought she knew everything. Kevin inspired me to change my college major when he said, ‘You can be a DJ with any degree, but you can’t do anything else with a radio degree.’” At age 18, she met her husband-to-be, Wade Radke, through a mutual friend. “It was love at first sight, though we wouldn’t admit it until 10 years later,” Radke said. “We both have Type A personalities and people often wonder how we have stay married.” The two have stayed happily married – for 16 years – and they work together to not only raise two sons (Stephan, 16, and Noah, 10) but also to nurture the business they founded in 2005 after purchasing the rights to a product line that had been in Wade’s family for 50 years. ALL CUSTOM JOBS “GSI is changing the way the aerospace industry looks at interior hardware,” Radke says proudly of their Sherwood-based aerospace manufacturing firm. “Every aircraft must have locks, hinges, latches, etc., yet nobody thinks to make or buy them until the last minute. We took these detail products from a last thought to a designer product.” GSI is best known for its specialty custom latches designed to specification for

customers like Boeing, American Airlines and Gulfstream. “We’re not interested in selling everybody the exact same latch. That has been done for years,” Radke said. “Our business aviation customers spend millions designing the most luxurious aircraft in the world – with every bell and whistle you can imagine – and then are told to pick from three latches to place in every one of their highly visible cabinets. We changed that. Wade and his team sit down with aircraft designers to understand the design of the interior and help design a latch that has the same design as the rest of the interior.” While Gina heads the business side of GSI, Wade serves as lead product designer,

“I don’t try to be ‘one of the guys.’ I work hard, and I accomplish more by being straightforward with a smile than by being overly bossy.” – Gina Radke utilizing his degrees in computer science, industrial engineering and aviation management. Having served his country for more than eight years in the United States Air Force, he now dedicates himself to building the perfect design for each customer and building the perfect firm-to-customer relationship as well. “Long-term success depends upon solid relationships from top to bottom. From your number one customer to your third- and fourth-tier suppliers, relationships are the key,” he said. “GSI goes above and beyond to ensure that our customers, suppliers and employees feel valued and empowered at every level. Empowered to improve a

process, educated to make decisions and fearless to infuse new direction. With every new design, there is a new creation.  Each creation requires relationships of its own, with a dedicated team to bring it to life.” A CHANGE OF ORDER Radke has been at the helm of GSI since 2008, when she stepped into the role through necessity. “Originally, I did sales and marketing and ran the office. When the economy slumped, Wade went to work for another company, so I became the CEO,” she explained. She was determined to do everything she could to keep the company afloat and keep workers employed, but the learning curve was high. “Here I was telling lifetime machinists how to work more efficiently,” she said. “I spent hours in online classes and used SCORE, AMS and every other manufacturing resource I could get my hands on. I learned to run every machine on the floor and have the scars to prove it!” After the company stabilized, Wade returned and briefly held the role of CEO. Just three months in, he decided that his wife was better suited for the position and asked her to take over once again. Being a female CEO can be difficult, Radke admits. “I have been called ‘the toughest thing in a skirt,’” she said, adding that in truth she’s joyful and even bubbly. “I don’t try to be ‘one of the guys.’ I work hard, and I accomplish more by being straightforward with a smile than by being overly bossy.” Radke’s work of late centers on maintaining GSI’s high standing in Arkansas’ aerospace industry. She’s just as passionate about improving conditions for the approximately 180 aviation and aerospace companies in the state, according to Robin Pelton, Aerospace Sector Manager for the Arkansas Economic Development Commission’s Aerospace Alliance. A colleague for the past seven years, Pelton has called on Radke to speak and co-coordinate events and describes her as a true advocate for the industry and a shining example of how to utilize resources available to local aerospace companies. “Gina is a great role model,” Pelton said. “She wants to see the industry grow as well as her company – not only for profit but www.talkbusiness.net 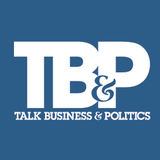