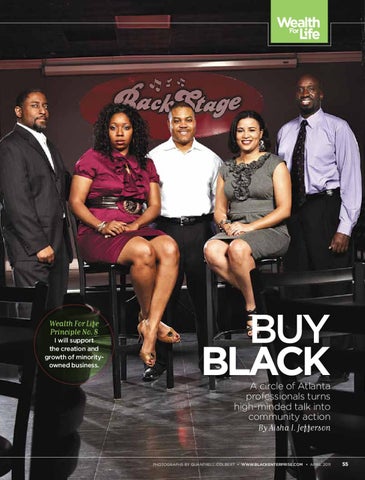 Wealth For Life Principle No. 8 I will support the creation and growth of minorityowned business.

If there’s one thing Chandra R. Thomas knows for sure, it’s that you can support blackowned businesses and obtain quality products and services. Considering the success of enterprises such as Oprah Winfrey’s Harpo Productions or Don Peebles’ Peebles Corp., having to defend the quality of black companies might seem passé. But the idea that “black-owned” equals subpar is a notion that persists among many. “I want to dispel the myth that by supporting black-owned businesses you’re settling for less quality,” says Thomas, a 37-year-old freelance journalist. Thomas notes that African Americans tend to have higher expectations of black-owned businesses than they do nonblack establishments. They are also less forgiving. “Someone can go to a place and have a bad experience and make a sweeping statement like, ‘That’s why I don’t support black businesses.’ I think that’s the wrong attitude.” Instead, she suggests responding to poor service by cordially asking to speak with the management and making a decision based on the outcome. “It wouldn’t be so disturbing if we were conservative, modest consumers. But looking at the statistics, we are the largest consumers, so not spending money with African American vendors and business owners is disturbing,” Thomas says. According to a report released by the Selig Center for Economic Growth, black buying power is on track to reach $1.2 trillion in 2015. The desire to combat such thinking was one reason Thomas and two of her friends established a discussion group primarily for African American professionals, called TalkBlack. The organization has made supporting black-owned business an integral part of its mission. TalkBlack hosts two-hour meetings on the first Saturday of each month at black-owned venues, and encourages attendees to purchase at least one item from the menu. Thomas got the idea to form the nonprofit group while engrossed in a lively discussion with her two close friends. Although they already actively participated in a few organizations, all three longed for a social setting for intellectuals outside of Atlanta’s club scene. The trio knew of others who shared their appetite for passionate discourse about the African American community and soon put their plan into action. “I didn’t know what to expect,” says Godfrey Fuji Noe, a 38-year-old social and behavioral scientist who, along with Thomas and journalist Bryan Toussaint, co-founded TalkBlack in December 2003. “I always knew it had—and still has—tons of potential.” The three held informal meetings at which they discussed the organization’s potential format, says Noe. Next, they drove around looking for black-owned venues at which they could host gatherings and further explore the direction the organization should

take. “The future is pregnant with possibility,” says Noe. “I see the potential for a radio or TV talk show and perhaps other projects.” As TalkBlack’s moderator, Thomas presides over meetings at which invited panelists and attendees express opinions on a range of topics such as volunteerism, economic empowerment, healthcare, the music industry, fashion, and relationships. The meetings are free and streamed live on the group’s website (www.talkblack.net). Beyond the group’s stated goal of engaging in interactive dialogue, Thomas sees the meeting format as an opportunity to support black-owned businesses and give them wider exposure. “It didn’t make sense to talk about economic empowerment but not give back to black businesses. That’s why we decided to hold our gatherings at black-owned venues,” Thomas explains. TalkBlack has similarly put thought into action regarding educational empowerment by volunteering and developing support relationships at two Knowledge is Power Program charter schools in Atlanta.

The 10 Wealth for Life Principles 1 I will live within my means. 2 I will maximize my income potential through education and training. 3 I will effectively manage my budget, credit, debt, and tax obligations. 4 I will save at least 10% of my income. 5 I will use homeownership as a foundation for building wealth. 6 I will devise an investment plan for my retirement needs and children’s education. 7 I will ensure that my entire family adheres to sensible money management principles. 8 I will support the creation and growth of minority-owned businesses. 9 I will guarantee my wealth is passed on to future generations through proper insurance and estate planning. 10 I will strengthen my community through philanthropy.

With the exception of a six-month hiatus the group took to reorganize in 2007, TalkBlack has met consistently since its first meeting at the legendary Paschal’s Restaurant, where Martin Luther King Jr. and other civil rights activists met. TalkBlack has grown from nine attendees at its first gathering to averaging 40 a month. February’s “Love and Relationships” topic nearly filled the meeting space to capacity with 80 attendees. “For seven years young African American professionals have driven from all over metro Atlanta to have an intellectual discussion, but this image isn’t promoted in the media,” Thomas says. “I’ve had people come from Alabama. We had one woman come from Ohio just to be a panelist.” Thomas says that TalkBlack is open to starting affiliate chapters in other cities. The number of black-owned businesses in the U.S. nearly doubled from 64,000 to roughly 127,000 between 2002 and 2007, according to the Census Bureau, and many African Americans consider Atlanta to be a black metropolis. Even so, finding black-owned venues where the group can meet isn’t

easy. TalkBlack has a list of such venues where it currently hosts its meetings, and it’s in the process of compiling a directory of Atlanta-area black-owned businesses. In the meantime, for most businesses, the only way to really know if they’re blackowned is by word of mouth. With the venues the group does utilize, the mutual support can have a real impact; TalkBlack representatives guarantee that 90% of its participants will patronize the business. Cassandra Ingram, owner of 5-year-old Urban Grind Coffeehouse, knows firsthand how beneficial hosting a TalkBlack meeting can be for business. Ingram’s coffeehouse has hosted seven TalkBlack events over the years and sees the experience as a win-win. She has experienced a 15-20% increase in sales during the meetings. “We’re getting additional exposure to people who may not have ever been here before,” says Ingram. “Some people continue to visit, bring a friend, or host an event at Urban Grind after attending a TalkBlack event.” be

Do you live by the Wealth for Life Principles? We would love to print your story. Nominate yourself or someone you know at wealth@blackenterprise.com. WWW.Blackenterprise.COM • april 2011