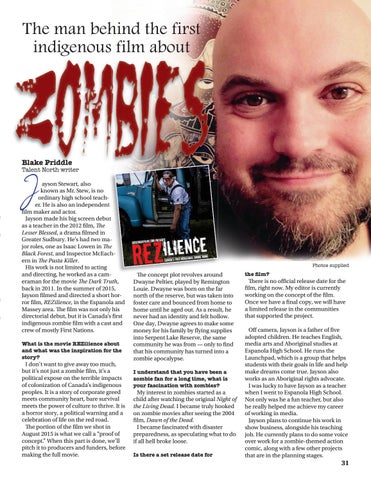 The man behind the first indigenous film about

Talent North writer ayson Stewart, also known as Mr. Stew, is no ordinary high school teacher. He is also an independent film maker and actor. Jayson made his big screen debut as a teacher in the 2012 film, The Lesser Blessed, a drama filmed in Greater Sudbury. He’s had two major roles, one as Isaac Lowen in The Black Forest,, and Inspector McEachern in The Pasta Killer. His work is not limited to acting and directing, he worked as a cameraman for the movie The Dark Truth, back in 2011. In the summer of 2015, Jayson filmed and directed a short horror film, REZilience, in the Espanola and Massey area. The film was not only his directorial debut, but it is Canada’s first indigenous zombie film with a cast and crew of mostly First Nations. What is the movie REZilience about and what was the inspiration for the story?

I don’t want to give away too much, but it’s not just a zombie film, it’s a political expose on the terrible impacts of colonization of Canada’s indigenous peoples. It is a story of corporate greed meets community heart, bare survival meets the power of culture to thrive. It is a horror story, a political warning and a celebration of life on the red road. The portion of the film we shot in August 2015 is what we call a “proof of concept.” When this part is done, we’ll pitch it to producers and funders, before making the full movie.

The concept plot revolves around Dwayne Peltier, played by Remington Louie. Dwayne was born on the far north of the reserve, but was taken into foster care and bounced from home to home until he aged out. As a result, he never had an identity and felt hollow. One day, Dwayne agrees to make some money for his family by flying supplies into Serpent Lake Reserve, the same community he was from — only to find that his community has turned into a zombie apocalypse. I understand that you have been a zombie fan for a long time, what is your fascination with zombies?

My interest in zombies started as a child after watching the original Night of the Living Dead. I became truly hooked on zombie movies after seeing the 2004 film, Dawn of the Dead. I became fascinated with disaster preparedness, as speculating what to do if all hell broke loose. Is there a set release date for

There is no official release date for the film, right now. My editor is currently working on the concept of the film. Once we have a final copy, we will have a limited release in the communities that supported the project. Off camera, Jayson is a father of five adopted children. He teaches English, media arts and Aboriginal studies at Espanola High School. He runs the Launchpad, which is a group that helps students with their goals in life and help make dreams come true. Jayson also works as an Aboriginal rights advocate. I was lucky to have Jayson as a teacher when I went to Espanola High School. Not only was he a fun teacher, but also he really helped me achieve my career of working in media. Jayson plans to continue his work in show business, alongside his teaching job. He currently plans to do some voice over work for a zombie-themed action comic, along with a few other projects that are in the planning stages.