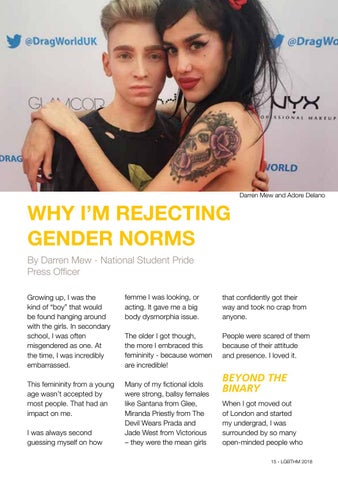 WHY I’M REJECTING GENDER NORMS By Darren Mew - National Student Pride Press Officer Growing up, I was the kind of “boy” that would be found hanging around with the girls. In secondary school, I was often misgendered as one. At the time, I was incredibly embarrassed.

femme I was looking, or acting. It gave me a big body dysmorphia issue.

that confidently got their way and took no crap from anyone.

The older I got though, the more I embraced this femininity - because women are incredible!

People were scared of them because of their attitude and presence. I loved it.

This femininity from a young age wasn’t accepted by most people. That had an impact on me.

Many of my fictional idols were strong, ballsy females like Santana from Glee, Miranda Priestly from The Devil Wears Prada and Jade West from Victorious – they were the mean girls

I was always second guessing myself on how

BEYOND THE BINARY When I got moved out of London and started my undergrad, I was surrounded by so many open-minded people who 15 - LGBTHM 2018

Welcome to the 2018 edition of LGBT History Month Magazine - The Official Guide to LGBT History Month ® published by Talent Media in association with Stonewall, supported by and featuring the Albert Kennedy Trust, Barnardo's, Diversity Role Models, National Student Pride and National Grid. Just a snippet of what's inside: - Stonewalls current campaign COME OUT FOR LGBT - We get to have a chat with Peter Bull from Above the Stag theatre about their new premises and what's to come in future. Barnardo's tell us the win of the Pink News Award and talk about how they put LGBT equality at the heart of everything they do. Student Pride are talking about the current crisis that there are 12000 LGBT homeless young people in the UK. We catch up with National Grid and HSBC about their LGBT Pride Networks and we hear from hear from Cybil War about how she built her house, a safe space, where everyone is welcome…..plus much much more 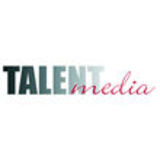