Rekishi (History) and Ongaku (Music) of the Nihon Go Gakko 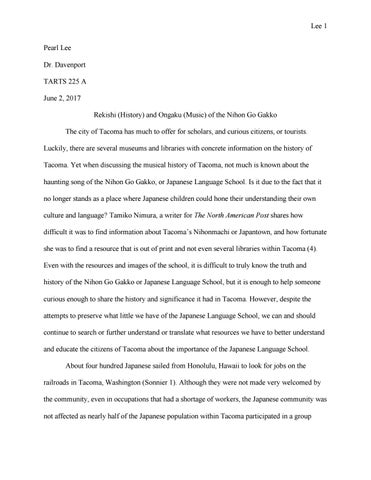 Lee 1 Pearl Lee Dr. Davenport TARTS 225 A June 2, 2017 Rekishi (History) and Ongaku (Music) of the Nihon Go Gakko The city of Tacoma has much to offer for scholars, and curious citizens, or tourists. Luckily, there are several museums and libraries with concrete information on the history of Tacoma. Yet when discussing the musical history of Tacoma, not much is known about the haunting song of the Nihon Go Gakko, or Japanese Language School. Is it due to the fact that it no longer stands as a place where Japanese children could hone their understanding their own culture and language? Tamiko Nimura, a writer for The North American Post shares how difficult it was to find information about Tacomaâ&amp;#x20AC;&amp;#x2122;s Nihonmachi or Japantown, and how fortunate she was to find a resource that is out of print and not even several libraries within Tacoma (4). Even with the resources and images of the school, it is difficult to truly know the truth and history of the Nihon Go Gakko or Japanese Language School, but it is enough to help someone curious enough to share the history and significance it had in Tacoma. However, despite the attempts to preserve what little we have of the Japanese Language School, we can and should continue to search or further understand or translate what resources we have to better understand and educate the citizens of Tacoma about the importance of the Japanese Language School. About four hundred Japanese sailed from Honolulu, Hawaii to look for jobs on the railroads in Tacoma, Washington (Sonnier 1). Although they were not made very welcomed by the community, even in occupations that had a shortage of workers, the Japanese community was not affected as nearly half of the Japanese population within Tacoma participated in a group

Lee 2 known as the Tacoma Japanese Association (1). This group was responsible for the formation and organization of the Japanese community. As time went on, â&amp;#x20AC;&amp;#x153;Japanese-owned businesses sprang up: hotels, restaurants, grocery stores, laundries, import shops and a Japanese language newspaperâ&amp;#x20AC;? (1). Eventually, there were many Japanese children born and ready to start their student life, but their Japanese born parents wanted to make sure that the children were to understand and learn of the same culture and language as themselves (1-2). On one fateful meeting at the Tacoma Japanese Associate in September, 1911, they decided to form a committee, elected a school board, organized fund raising activities, and undertook to secure both a teacher and location for the new language school (2). The establishment of the Japanese Language School was in a small house located on 411 S. 15th Street, which was rented from the Washington Fidelity Company for the sum of $18 per month (2). The school was intended to serve to the children as a school and a residence for the teacher (2). The first teacher was Kuni Yamasaki, originally from Seattle. She took the role on May 30, 1912 and agreed to move to Tacoma to be the one to teach the native Japanese culture and language (2). The students were divided into two categories which was primary (preschool) and grade school groups. The primary group was divided into two groups with singing classes and crafting activities, as well as playing and learning the Japanese alphabet (Long). The grade school group was divided into six grades which focused on reading, writing, calligraphy, and also on learning Japanese tales, customs, and culture (Long, Sonnier 2). The student body was at a total of 13 until 1914, when it increased to 27 students (Long, Sonnier 2). On April 8, 1914, the Tacoma Japanese Association held a special board meeting to potentially purchase a vacant space near what was the Sampson Hotel, which would be the new permanent location of the Japanese Language School (2). Unfortunately, a dispute broke out between the Tacoma Japanese

Lee 3 Association members which delayed the progress but also resulted in leasing another house at 510 S. 15th Street, for a little less than the first house, at a sum of $15 per month for a two and one-half year lease (2). However, the final and permanent location of the school was at 1715 Tacoma Avenue S (4). The school was not just a simple school but a special place for students, families and teachers. For these students, who arrived after their public day schools ended for the day, would attend each week day from 4:00 to 6:00 p.m. to study Japanese calligraphy, grammar, art, and history, as well as customs and manners for a proper Japanese child (3). On Saturdays, there was special tutoring which was offered by advanced Japanese students in students’ public school subjects (3). The school also had student talent shows, athletic events, and picnics or trips (3). During special holidays at the school, students and their families would dress in traditional Japanese fashion, with elaborate costumes and makeup (3). Parents brought bamboo flower vases, sandals, straw mats, and wall-hangings to expose their children and others the culture of Japan (Long). Throughout the different resources that were available, there was very minimal details about the musical history of the Japanese Language School. However, from all the research done, it seems the musical focus of the school was on singing rather than instrument playing. Students also participated in performances and plays (“Remembering Tacoma’s Nihongo Gakko”). From the images that were found, I could see that the students would perform in choirs. It would be safe to assume that students would sing traditional Japanese songs, such as “Sakura Sakura”, which is very popular song that is presentative of Japan, as well as being a popular beginner song in Japanese music classes. When learning the flute, this piece was also in my beginner’s book.

Lee 4 The school also had a song called “Toyo Saka Noboru”, or “Rising Bright Sun”, the origin of the name likely comes from Japan’s nickname which is the “Land of the Rising Sun”. It is interesting to note that the lyrics were written by the principal, rather than singing the Japanese anthem, Kimigayo. But this also makes the song harder to find as it is an original, so there is not much that comes up when searching up the title in both its English translated or Japanese title. However, there is a SoundCloud recording from the University of Washington Tacoma with the song being sung by Katsumi Hashimoto Fujuta, who is a former student who attended the Japanese Language School for five years. Unfortunately, Fujtuta shares in the track that she does not have the musical piece that accompanies the music and had to sing it in acapella. The first verse in romaji (English written sounds of Japanese characters) are: Toyo saka noboru hi no moto no Kiyoko chishi o omi ni ukete Hoshi no mihata no America ni Umare shi warera ni shimeiari Translated into English, they would be: Children of the pure blood from the land of the rising sun and born in America where the star-spangled banner flies we have a mission a sense of special purpose (Sonnier) Hearing Fujuta’s singing of the song was a mix of bittersweet tone as it held pride, but also sadness: pride for the school in being a space of learning and community building, as well as the

Lee 5 tragedy of loss and forced removal after the bombing of Pearl Harbor on December 7, 1941. Even more disheartening is that there are no further translations for the other four verses. Unfortunately, unable to fully translate the song and only able to pick up on a few words, I cannot completely decipher the lyrics carefully crafted by the principal, representing the students who attended the Japanese Language School. However, it shows that we should translate these lyrics to truly get the meaning behind the lyrics and the connection the school had with the ideals of parents and school administrators. Since 2014, there is only a bronze sculpture that stands on the former location of the Japanese Language School at the edge of the University of Washington Tacoma. The university wanted to uphold and preserve the heritage of the once thriving Japanese community (“Remembering Tacoma’s Nihongo Gakko”). Originally, the university had gone through multiple memorial designs, including a passionate design by landscape architect, Kenichi Nakano whose mother, Yaeko Nakano was a former student at the Japanese Language School (“Remembering Tacoma’s Nihongo Gakko”). In the end, the nine-foot-tall bronze sculpture called “Maru” (or “Circle”) by Gerard Tsutakawa was decided upon by the university and the advisory board of former Japanese School students. It is located amongst a landscape design of boulders and Japanese maple trees, while the structure itself as a large cut-out circle wide enough for people to sit in, and is designed to be interactive (“Remembering Tacoma’s Nihongo Gakko”). However, this sculpture cannot truly define the booming Japantown that had once existed. In fact, there are various gaps within the larger findings of the history of Japantown and the Japanese Language School. Tamiko Nimura was given the task to write about Tacoma’s Japantown, for which she says she is grateful as she is working in an established and proud

Lee 6 tradition of ethnic media and ethnic studies, as she gets to tell stories that not many have or will. But she mentions that it is also heartbreaking due to not only speaking into silence, but also to speak against silence or erasure, as she views her writing task as an act of mourning, a small act of healing, and a small act of restitution (Nimura). Relying on a sole sculpture to share the history, with only a few articles and images available is not enough to truly grasp the rich, painful history that the Japanese community endured through. Additionally, there are several seriesâ&amp;#x20AC;&amp;#x2122; of local history books about the diverse neighborhoods in Tacoma, but none solely about Japantown (Nimura). At the end of her article, she talks about how her hairdresser, with a salon near Pacific Avenue with view of the Union Station and Washington State History Museum, and a longtime resident of Tacoma since the mid-1960s, was asking about her project, saying that she never knew there was a Japantown. She then inquired about the location. Nimura wistfully tells her that it was located at the very same location as the salon. Although it is difficult to find more resources about the Japanese Language School, especially when trying to make them be accessible to the public, it is important to continue searching and studying. Like Nimuraâ&amp;#x20AC;&amp;#x2122;s hairdresser, whose salon sits atop of the ruins of Tacomaâ&amp;#x20AC;&amp;#x2122;s Japantown, we should have more awareness of what our beloved city holds. Although this is the same for any kind of history, even though it could be shameful or painful, it is also uplifting and reassuring to see how Tacoma has developed and changed in the present days. The former home of the Japanese Language School is on the University of Washington Tacoma campus, a school where diversity and inclusion is welcomed with absolutely zero tolerance of discrimination. It is in learning about history that we understand our identity as people of Tacoma and share with visitors or future generations, to learn be proud and honored that they stand in a city that has gone through so much but has developed into the beautiful, inclusive city

Lee 7 where we live â&amp;#x20AC;&amp;#x201C; a place where the song of the students at the Japanese Language School stills echoes today.

Rekishi (History) and Ongaku (Music) of the Nihon Go Gakko 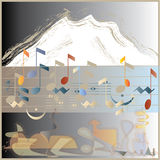