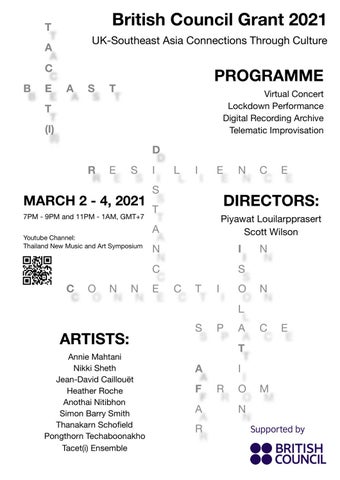 “Resilience, Distance, Connection in Isolation, Space from Afar” The pandemic has led us to reconsider the future of art and procedures of artistic creation. The pursuit of resilience through online networking, now and in an increasingly digital future, will create the durability that we need to broaden not only the possibilities of technology and the arts but also the development of cultures and communities in Southeast Asia and the UK. This project is leading by two main artists between United Kingdom and Thailand, Dr. Scott Wilson and Piyawat Louilarpprasert with support by the British Council Grant 2021: UKSoutheast Asia Connections Through Culture. The project aims to exchange local and mutual knowledge of music with the theme: “Resilience, Distance, Connection in Isolation, Space from Afar”. With the missing presence of artistic creativities during the pandemic situation, we will build on existing relationships, and introduce younger artists to this network of connections. During March 2 – 4, 2021, we will achieve our mission by conducting performance activities on digital platforms. This virtual series is consisting of 6 performances in 3 days during 2 – 4 of March. There are 2 programs in each day from 7 to 9pm and 11pm to 1 AM (GMT+7). The whole program is involving virtual concerts, lockdown performances, digital recording archives and the telematic improvisation. The performances will be streamed on youtube channel and facebook page named: Thailand New Music and Arts Symposium (TNMAS). Our featured artists include Annie Mahtani, Nikki Sheth, Jean-David Caillouët, Heather Roche, Anothai Nitibhon, Simon Barry Smith, Thanakarn Schofield, Pongthorn Techaboonakho and the Tacet(i) Ensemble. This is a great opportunity to connect artists from younger generations and professionals to share our mutual experiences and local knowledge in art and music, and to initiate a new and creative collaboration between our territories.

Shaman (2021) for trombone, tuba and percussion Resilience (2021) for viola solo

Brennen (2007) for clarinet and live electroacoustics

Breeze (2014) for trombone and electronics

Ember (2012) for ensemble and live electroacoustics

BC Project Artists Produced and Remixed by Jean-David Caillouët

COMPOSERS/ SOUND ARTISTS SCOTT WILSON For the past three decades Scott Wilson’s music and sound art has explored the intersection of a variety of different and sometimes contradictory practices. Combining aspects of instrumental/vocal composition, field recording, immersive multichannel electroacoustic sound and visuals, crosscultural collaboration, live coding and improvisation in works that are each a bespoke solution to a unique artistic problem, his output holds few firm allegiances to schools, styles or genres, and regularly transgresses the boundaries of the ‘acceptable’ to be found in even the most supposedly experimental fields of artistic practice. A particular interest in collaboration has led to a rich range of output, including cross-cultural and interdisciplinary works. These and other pieces including hyperreal soundscapes using sound from the natural world, a collaborative musical palimpsest on classic Qawwali recordings, and music created by sonifying the particle collisions of CERN’s Large Hadron Collider have been presented around the world. Also active as an educator and mentor for young artists, he is the director of Birmingham ElectroAcoustic Sound Theatre (BEAST) and teaches at the University of Birmingham in the U.K. PIYAWAT LOUILARPPRASERT “Young and Gifted, Meet the rebel Thai composer taking music to unheard heights” CNN News Worlds Report, Karla Cripps

ANNIE MAHTANI Annie Mahtani (UK, 1981) is an electroacoustic composer, sound artist and performer working and living in Birmingham (UK). She studied with Jonty Harrison at master’s and doctoral level at the University of Birmingham, completing her PhD in 2008. Her output encompasses electronic music composition from acousmatic music to free improvisation. As a collaborator, Annie Mahtani has worked extensively with dance and theatre, and on site-specific installations. With a strong interest in field recording, her work often explores the inherent sonic nature and identity of environmental sound, amplifying sonic characteristics that are not normally audible to the naked ear. Her music explores abstract and recognizable sound worlds and all the spaces in between. Annie works extensively with multichannel audio both in fixed medium works and in live performance. Her music has been recognized and performed extensively in concerts and festivals internationally and she was the recipient of a mention at the 35th Bourges international Electroacoustic Music and Sound Art Competition (France, 2008). She has received a number of notable commissions including those from Birmingham Contemporary Music Group, Jazzlines, Birmingham Repertory Theatre, Birmingham Hippodrome, and Rosie Kay Dance Company (for which she is the Company composer). Annie Mahtani is a Lecturer in Music at the University of Birmingham. She is co-director of SOUNDkitchen, a Birmingham-based collective of curators, producers and performers of live electronic music and sound art. She has been a member of a number of boards and panels and is currently a committee member for the British ElectroAcoustic Network (BEAN), and Chair of the British Section of the International Society for Contemporary Music (ISCM). NIKKI SHETH Nikki Sheth is a sound artist based in Birmingham, UK. She uses field recordings to produce site-specific soundscape works. Her practice involves extensive field recording, multi-channel soundscape composition, multimedia installations and soundwalking. She has been on field recording residencies around the world and her installation and sound works have been presented internationally. In 2020 she was awarded a Sound and Music award and was nominated for the Phonurgia Nova Awards in the Soundscape category. She has been teaching Studio Composition at The University of Birmingham since 2018 and is a member of sound collective SOUNDkitchen.

ANOTHAI NITIBHON Composer / Pianist / Artist, Anothai completed her bachelor degree with 1st class honour from Chulalongkorn University, Thailand, she then continued her studies in the Master programme in Music Composition at the University of Edinburgh under Professor Nigel Osborne in 2002. After graduated with a Master Degree and was awarded a distinction, she was awarded the scholarship from the University and the Overseas Research Students Awards Scheme, and obtain her PhD in Composition in May 2007. As a former vice president and dean at the Princess Galyani Vadhana Institute of Music in Thailand since its establishment in 2013, Anothai initiated and lead various international projects such as the &#39;PGVIM&#39; International Symposium and ASEAN Youth Ensemble. Both projects which became a mutual platform for creative discussions and reflective questions contributed to the musical development in Southeast Asia, as well as advocated community engagement projects such as the PGVIM Children&#39;s Music Theatre and PGVIM Singers. Anothai is now teaching at the School of Music, Princess Galyani Vadhana Institute of Music, Bangkok, Thailand, and enjoy performing/creating/collaborating with the open-minded artists/thinkers and regularly involved in various academic and creative music projects both in Thailand and abroad. Jean-David Caillouët Jean-David Caillouët is a sound and visual artist. Exploring the boundaries between tradition and innovation, many of his recent projects combine thematic audio-visual collages with the aesthetics of digital media. He has performed internationally, playing well respected festivals such as the Edinburgh Fringe, Soundbridge in Malaysia or the European music festival in Hanoï. He has produced sound and music for films, animations, theatre and dance. His installation projects have been exhibited in places as varied as the historical caves of Kent’s Cavern in the UK to Bangkok&#39;s Art and Culture Center. In 2015 he co-curated AS(EAR)N, an interactive installation project celebrating the rich cultural diversity of Southeast Asia from a sonic perspective. He is currently working on a series of film documentaries, portraying some of the musical pioneers in Southeast Asia. He has studied at Brussels Royal Conservatoire, Dartington College of Arts and completed his PhD at Edinburgh University. He lectures in music composition, multimedia and production at PGVIM in Bangkok.

THANAKARN SCHOFIELD Schofield particular interest and expertise in compositional practices are focused on two sources: the application and metamorphosis of folklores and traditional practices (ritual and non-ritual) from the East/Southeast Asia, and the translation and modulation of sonic physicality and granulation which involves etymological studies of human anatomy, psychology, and physiology. Currently, Schofield is a PhD student in Music Composition at the Graduate Center – City University of New York (CUNY) under the supervision of Professor Jason Eckardt. His compositions have been performed in New Music festivals across Asia, Europe, North and South America. These include: MISE-EN/Curator Series (NYC), Summer Sound Festival (Finland), Nucleo Musica Nova (Brazil), Bilkent Composition Academy (Turkey), Thailand International Composition Festival (TICF), the 26th Young Composer Meeting in Apeldoorn “orkest de ereprijs” (Netherlands), reMusic.org – VII St. Petersburg International Music Festival (Russia), and more. He also worked with several ensembles and orchestras, such as: Avanti Orchestra, Residentie Orkest, Harmonieorkest De Phoenix, Orkest de Ereprijs, “But What About” Ensemble, Harp Sirens, Hezarfen Ensemble, Kluster 5 Ensemble, Mivos String Quartet, Moscow Contemporary Music Ensemble, New European Ensemble, and Tacet(i) Ensemble. PONGTORN TECHABOONAKHO Bangkok-born, Pongtorn Techaboonakho (b.1996) is a young generation Thai composer and audio engineer. He studied guitar with Chairat Pornamnuay and entered the Pre-College Program at College of Music, Mahidol University in 2012 majoring in classical guitar. In 2018, he obtained a Bachelor’s of Music at Princess Galyani Vadhana Institute of Music (PGVIM) with a full scholarship where he studied classical guitar with Padet Netpakdee, Jetjumnong Jongprasert, and music composition with Dr.Anothai Nitibhon and Dr.Jiradej Setabundhu. Currently, he is pursuing his Master’s Degree in mixed composition at the University of Birmingham (England) under the supervision of Dr. Scott Wilson. He is also studying with a Thai composer, Piyawat Louilarpprasert.

HEATHER ROCHE Born in Canada, clarinetist Heather Roche lives in London. Referred to as “The Queen of Extended Techniques” on BBC Radio 3, she appears regularly at festivals including the London Contemporary Music Festival, Acht Brücken, Wittener Tage für neue Kammermusik, Musica Nova, MusikFest, etc. She was a founding member of hand werk, and plays with Apartment House (London). She has a longstanding duo with the accordionist Eva Zöllner, and they performed at the Venice Biennale and Mixtur Festival, as well as on tour in Mexico and Sweden. She also worked with the Musikfabrik, the WDR Orchestra, the London Symphony Orchestra, London Sinfonietta, etc. She has a PhD from the University of Huddersfield. Her blog attracts 90,000 viewers each year, and she is reviews editor of TEMPO. Her debut solo CD, Ptelea, is out on HCR/NMC, and Headlong appears on Métier. She also records for the Another Timbre label. www.heatherroche.net

THANAPAT OGASLERT (Thailand) A former percussionist and a self-taught technician, Thanapat is one of emerging visual/electronic artists in Thailand. Thanapat creates multimedia art as a synthesis artist by joining the multimedia-electro performing group, The Face Shield band. His electronic music and sound artwork amalgamate elements between visual art, computerization, analog technology and sound-visual integration. Recently, his previous work set, “Caged/Uncaged” was exhibited at Bangkok Art and Culture Centre (BACC) with the Face Shield. His recent works are including the “Chamber of Null” (an interactive Exhibition), The Face shield Vol.1 – 4 and more.

“Resilience, Distance, Connection in Isolation, Space from Afar” This project is leading by two main artists between United Kingdom and Thailand, Dr. Scott Wilson and Piyawat Louilarpprasert with support by the British Council Grant 2021: UK-Southeast Asia Connections Through Culture. The project aims to exchange local and mutual knowledge of music with the theme: “Resilience, Distance, Connection in Isolation, Space from Afar”. With the missing presence of artistic creativities during the pandemic situation, we will build on existing relationships, and introduce younger artists to this network of connections.