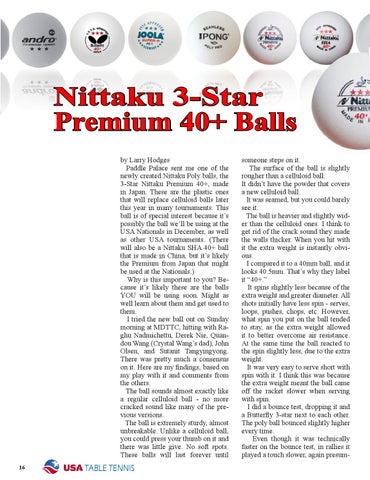 Nittaku 3-Star Premium 40+ Balls by Larry Hodges Paddle Palace sent me one of the newly created Nittaku Poly balls, the 3-Star Nittaku Premium 40+, made in Japan. These are the plastic ones that will replace celluloid balls later this year in many tournaments. This ball is of special interest because it’s possibly the ball we’ll be using at the USA Nationals in December, as well as other USA tournaments. (There will also be a Nittaku SHA 40+ ball that is made in China, but it’s likely the Premium from Japan that might be used at the Nationals.) Why is this important to you? Because it’s likely these are the balls YOU will be using soon. Might as well learn about them and get used to them. I tried the new ball out on Sunday morning at MDTTC, hitting with Raghu Nadmichettu, Derek Nie, Quandou Wang (Crystal Wang’s dad), John Olsen, and Sutanit Tangyingyong. There was pretty much a consensus on it. Here are my findings, based on my play with it and comments from the others. The ball sounds almost exactly like a regular celluloid ball - no more cracked sound like many of the previous versions. The ball is extremely sturdy, almost unbreakable. Unlike a celluloid ball, you could press your thumb on it and there was little give. No soft spots. These balls will last forever until 16

someone steps on it. The surface of the ball is slightly rougher than a celluloid ball. It didn’t have the powder that covers a new celluloid ball. It was seamed, but you could barely see it. The ball is heavier and slightly wider than the celluloid ones. I think to get rid of the crack sound they made the walls thicker. When you hit with it the extra weight is instantly obvious. I compared it to a 40mm ball, and it looks 40.5mm. That’s why they label it “40+.” It spins slightly less because of the extra weight and greater diameter. All shots initially have less spin - serves, loops, pushes, chops, etc. However, what spin you put on the ball tended to stay, as the extra weight allowed it to better overcome air resistance. At the same time the ball reacted to the spin slightly less, due to the extra weight. It was very easy to serve short with spin with it. I think this was because the extra weight meant the ball came off the racket slower when serving with spin. I did a bounce test, dropping it and a Butterfly 3-star next to each other. The poly ball bounced slightly higher every time. Even though it was technically faster on the bounce test, in rallies it played a touch slower, again presum- 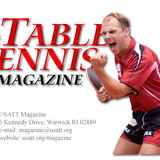