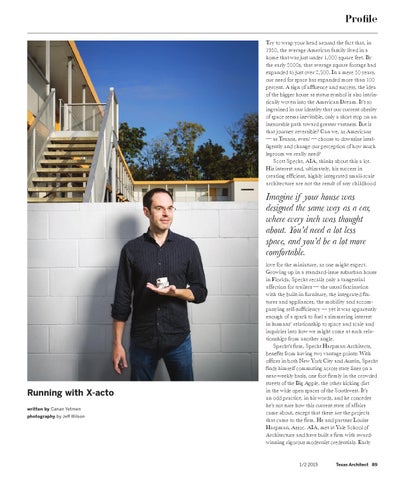 Profile Try to wrap your head around the fact that, in 1950, the average American family lived in a home that was just under 1,000 square feet. By the early 2000s, that average square footage had expanded to just over 2,300. In a mere 50 years, our need for space has expanded more than 100 percent. A sign of affluence and success, the idea of the bigger house as status symbol is also intrinsically woven into the American Dream. It’s so ingrained in our identity that our current obesity of space seems inevitable, only a short stop on an inexorable path toward greater vastness. But is that journey reversible? Can we, as Americans — as Texans, even! — choose to downsize intelligently and change our perception of how much legroom we really need? Scott Specht, AIA, thinks about this a lot. His interest and, ultimately, his success in creating efficient, highly integrated small-scale architecture are not the result of any childhood

Imagine if your house was designed the same way as a car, where every inch was thought about. You’d need a lot less space, and you’d be a lot more comfortable.

love for the miniature, as one might expect. Growing up in a standard-issue suburban house in Florida, Specht recalls only a tangential affection for trailers — the usual fascination with the built-in furniture, the integrated fixtures and appliances, the mobility and accompanying self-sufficiency — yet it was apparently enough of a spark to fuel a simmering interest in humans’ relationship to space and scale and inquiries into how we might come at such relationships from another angle. Specht’s firm, Specht Harpman Architects, benefits from having two vantage points: With offices in both New York City and Austin, Specht finds himself commuting across state lines on a near-weekly basis, one foot firmly in the crowded streets of the Big Apple, the other kicking dirt in the wide open spaces of the Southwest. It’s an odd practice, in his words, and he concedes he’s not sure how this current state of affairs came about, except that these are the projects that came to the firm. He and partner Louise Harpman, Assoc. AIA, met at Yale School of Architecture and have built a firm with awardwinning rigorous modernist credentials. Early

Despite the state motto, bigger isn’t always better. This issue of Texas Architect magazine takes a look at why building small matters.

Despite the state motto, bigger isn’t always better. This issue of Texas Architect magazine takes a look at why building small matters.