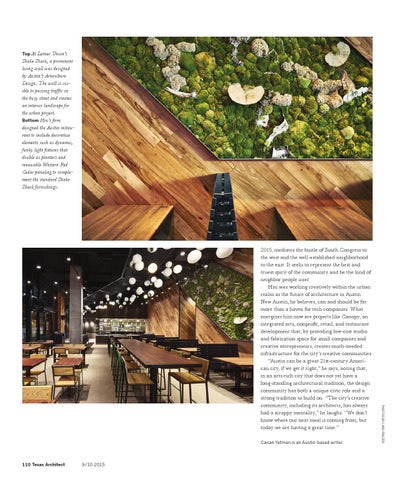 Lamar Union’s Shake Shack, a prominent living wall was designed by Austin’s Articulture Design. The wall is visible to passing traffic on the busy street and creates an interior landscape for the urban project. Bottom Hsu’s firm designed the Austin restaurant to include decorative elements such as dynamic, funky light fixtures that double as planters and renewable Western Red Cedar paneling to complement the standard Shake Shack furnishings.

Canan Yetmen is an Austin-based writer.

2015, mediates the bustle of South Congress to the west and the well-established neighborhood to the east. It seeks to represent the best and truest spirit of the community and be the kind of neighbor people want. Hsu sees working creatively within the urban realm as the future of architecture in Austin. New Austin, he believes, can and should be far more than a haven for tech companies. What energizes him now are projects like Canopy, an integrated arts, nonprofit, retail, and restaurant development that, by providing low-cost studio and fabrication space for small companies and creative entrepreneurs, creates much-needed infrastructure for the city’s creative communities. “Austin can be a great 21st-century American city, if we get it right,” he says, noting that, in an arts-rich city that does not yet have a long-standing architectural tradition, the design community has both a unique civic role and a strong tradition to build on. “The city’s creative community, including its architects, has always had a scrappy mentality,” he laughs. “We don’t know where our next meal is coming from, but today we are having a great time.”

This issue features the Texas Society of Architects 2015 Design Awards. The 13 selected projects represent a range of typologies, styles, an...

This issue features the Texas Society of Architects 2015 Design Awards. The 13 selected projects represent a range of typologies, styles, an...