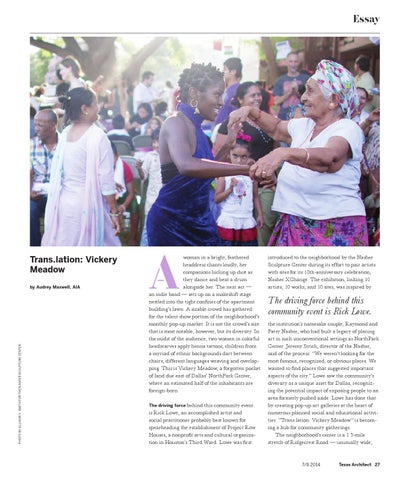 PHOTO BY ALLISON V. SMITH FOR THE NASHER SCULPTURE CENTER.

woman in a bright, feathered headdress chants loudly, her companions kicking up dust as they dance and beat a drum alongside her. The next act — an indie band — sets up on a makeshift stage nestled into the tight confines of the apartment building’s lawn. A sizable crowd has gathered for the talent show portion of the neighborhood’s monthly pop-up market. It is not the crowd’s size that is most notable, however, but its diversity. In the midst of the audience, two women in colorful headscarves apply henna tattoos; children from a myriad of ethnic backgrounds dart between chairs, different languages weaving and overlapping. This is Vickery Meadow, a forgotten pocket of land due east of Dallas’ NorthPark Center, where an estimated half of the inhabitants are foreign-born. behind this community event is Rick Lowe, an accomplished artist and social practitioner probably best known for spearheading the establishment of Project Row Houses, a nonprofit arts and cultural organization in Houston’s Third Ward. Lowe was first The driving force

introduced to the neighborhood by the Nasher Sculpture Center during its effort to pair artists with sites for its 10th-anniversary celebration, Nasher XChange. The exhibition, linking 10 artists, 10 works, and 10 sites, was inspired by

The driving force behind this community event is Rick Lowe. the institution’s namesake couple, Raymond and Patsy Nasher, who had built a legacy of placing art in such unconventional settings as NorthPark Center. Jeremy Strick, director of the Nasher, said of the process: “We weren’t looking for the most famous, recognized, or obvious places. We wanted to find places that suggested important aspects of the city.” Lowe saw the community’s diversity as a unique asset for Dallas, recognizing the potential impact of exposing people to an area formerly pushed aside. Lowe has done that by creating pop-up art galleries at the heart of numerous planned social and educational activities. “Trans.lation: Vickery Meadow” is becoming a hub for community gatherings. The neighborhood’s center is a 1.5-mile stretch of Ridgecrest Road — unusually wide,

From purpose-built museums and galleries to new white-box interiors for former warehouses, we take a look at the relationship between archit...

From purpose-built museums and galleries to new white-box interiors for former warehouses, we take a look at the relationship between archit...