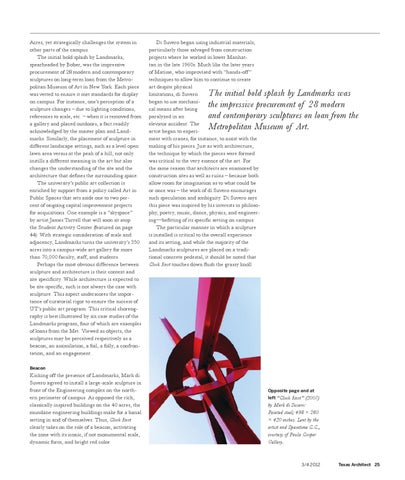 Acres, yet strategically challenges the system in other parts of the campus. The initial bold splash by Landmarks, spearheaded by Bober, was the impressive procurement of 28 modern and contemporary sculptures on long-term loan from the Metropolitan Museum of Art in New York. Each piece was vetted to ensure it met standards for display on campus. For instance, one’s perception of a sculpture changes – due to lighting conditions, references to scale, etc. – when it is removed from a gallery and placed outdoors, a fact readily acknowledged by the master plan and Landmarks. Similarly, the placement of sculpture in different landscape settings, such as a level open lawn area versus at the peak of a hill, not only instills a different meaning in the art but also changes the understanding of the site and the architecture that defines the surrounding space. The university’s public art collection is enriched by support from a policy called Art in Public Spaces that sets aside one to two percent of ongoing capital improvement projects for acquisitions. One example is a “skyspace” by artist James Turrell that will soon sit atop the Student Activity Center (featured on page 44). With strategic consideration of scale and adjacency, Landmarks turns the university’s 350 acres into a campus-wide art gallery for more than 70,000 faculty, staff, and students. Perhaps the most obvious difference between sculpture and architecture is their context and site specificity. While architecture is expected to be site-specific, such is not always the case with sculpture. This aspect underscores the importance of curatorial rigor to ensure the success of UT’s public art program. This critical choreography is best illustrated by six case studies of the Landmarks program, four of which are examples of loans from the Met. Viewed as objects, the sculptures may be perceived respectively as a beacon, an assimilation, a foil, a folly, a confrontation, and an engagement.

Di Suvero began using industrial materials, particularly those salvaged from construction projects where he worked in lower Manhattan in the late 1960s. Much like the later years of Matisse, who improvised with “hands-off” techniques to allow him to continue to create art despite physical limitations, di Suvero began to use mechanical means after being paralyzed in an elevator accident. The artist began to experiment with cranes, for instance, to assist with the making of his pieces. Just as with architecture, the technique by which the pieces were formed was critical to the very essence of the art. For the same reason that architects are enamored by construction sites as well as ruins – because both allow room for imagination as to what could be or once was – the work of di Suvero encourages such speculation and ambiguity. Di Suvero says this piece was inspired by his interests in philosophy, poetry, music, dance, physics, and engineering—befitting of its specific setting on campus. The particular manner in which a sculpture is installed is critical to the overall experience and its setting, and while the majority of the Landmarks sculptures are placed on a traditional concrete pedestal, it should be noted that Clock Knot touches down flush the grassy knoll

The initial bold splash by Landmarks was the impressive procurement of 28 modern and contemporary sculptures on loan from the Metropolitan Museum of Art.

Kicking off the presence of Landmarks, Mark di Suvero agreed to install a large-scale sculpture in front of the Engineering complex on the northern perimeter of campus. As opposed the rich, classically inspired buildings on the 40 acres, the mundane engineering buildings make for a banal setting in and of themselves. Thus, Clock Knot clearly takes on the role of a beacon, activating the zone with its iconic, if not monumental scale, dynamic form, and bright red color.

Destinations represent different points of arrival, whether a temporary stopping place during a student’s busy day on campus or destinations...

Destinations represent different points of arrival, whether a temporary stopping place during a student’s busy day on campus or destinations...