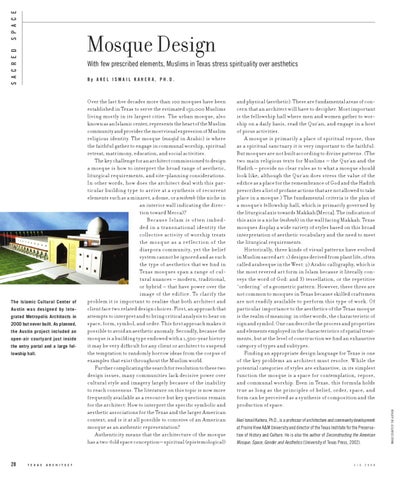 Austin was designed by Integrated Metropolis Architects in 2000 but never built. As planned, the Austin project included an open-air courtyard just inside the entry portal and a large fellowship hall.

and physical (aesthetic). These are fundamental areas of concern that an architect will have to decipher. Most important is the fellowship hall where men and women gather to worship on a daily basis, read the Qur’an, and engage in a host of pious activities. A mosque is primarily a place of spiritual repose, thus as a spiritual sanctuary it is very important to the faithful. But mosques are not built according to divine patterns. (The two main religious texts for Muslims – the Qur’an and the Hadith – provide no clear rules as to what a mosque should look like, although the Qur’an does stress the value of the edifice as a place for the remembrance of God and the Hadith prescribes a list of profane actions that are not allowed to take place in a mosque.) The fundamental criteria is the plan of a mosque’s fellowship hall, which is primarily governed by the liturgical axis towards Makkah [Mecca]. The indication of this axis is a niche (mihrab) in the wall facing Makkah. Texas mosques display a wide variety of styles based on this broad interpretation of aesthetic vocabulary and the need to meet the liturgical requirements. Historically, three kinds of visual patterns have evolved in Muslim sacred art: 1) designs derived from plant life, often called arabesque in the West; 2) Arabic calligraphy, which is the most revered art form in Islam because it literally conveys the word of God; and 3) tessellation, or the repetitive “ordering” of a geometric pattern. However, these three are not common to mosques in Texas because skilled craftsmen are not readily available to perform this type of work. Of particular importance to the aesthetics of the Texas mosque is the realm of meaning; in other words, the characteristic of sign and symbol. One can describe the process and properties and elements employed in the characteristics of spatial treatments, but at the level of construction we find an exhaustive category of types and subtypes. Finding an appropriate design language for Texas is one of the key problems an architect must resolve. While the potential categories of styles are exhaustive, in its simplest function the mosque is a space for contemplation, repose, and communal worship. Even in Texas, this formula holds true as long as the principles of belief, order, space, and form can be perceived as a synthesis of composition and the production of space. Akel Ismail Kahera, Ph.D., is a professor of architecture and community development at Prairie View A&M University and director of the Texas Institute for the Preservation of History and Culture. He is also the author of Deconstructing the American Mosque: Space, Gender and Aesthetics (University of Texas Press, 2002).

The Islamic Cultural Center of

Over the last five decades more than 100 mosques have been established in Texas to serve the estimated 150,000 Muslims living mostly in its largest cities. The urban mosque, also known as an Islamic center, represents the heart of the Muslim community and provides the most visual expression of Muslim religious identity. The mosque (masjid in Arabic) is where the faithful gather to engage in communal worship, spiritual retreat, matrimony, education, and social activities. The key challenge for an architect commissioned to design a mosque is how to interpret the broad range of aesthetic, liturgical requirements, and site-planning considerations. In other words, how does the architect deal with this particular building type to arrive at a synthesis of recurrent elements such as a minaret, a dome, or a mihrab (the niche in an interior wall indicating the direction toward Mecca)? Because Islam is often imbedded in a transnational identity the collective activity of worship treats the mosque as a ref lection of the diaspora community, yet the belief system cannot be ignored and as such the type of aesthetics that we find in Texas mosques span a range of cultural nuances – modern, traditional, or hybrid – that have power over the image of the edifice. To clarify the problem it is important to realize that both architect and client face two related design choices. First, an approach that attempts to interpret and to bring critical analysis to bear on space, form, symbol, and order. This first approach makes it possible to avoid an aesthetic anomaly. Secondly, because the mosque is a building type endowed with a 1,500-year history it may be very difficult for any client or architect to suspend the temptation to randomly borrow ideas from the corpus of examples that exist throughout the Muslim world. Further complicating the search for resolution to these two design issues, many communities lack decisive power over cultural style and imagery largely because of the inability to reach consensus. The literature on this topic is now more frequently available as a resource but key questions remain for the architect: How to interpret the specific symbolic and aesthetic associations for the Texas and the larger American context, and is it at all possible to conceive of an American mosque as an authentic representation? Authenticity means that the architecture of the mosque has a two-fold space conception— spiritual (epistemological)