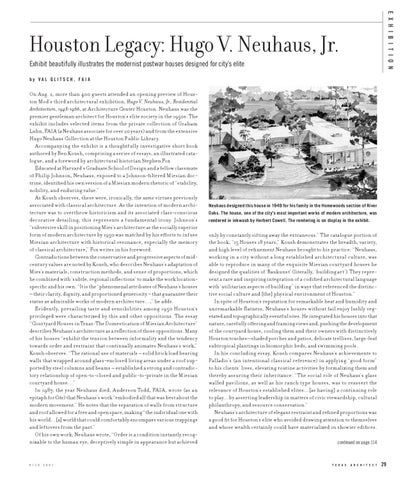 On Aug. 2, more than 400 guests attended an opening preview of Houston Mod’s third architectural exhibition, Hugo V. Neuhaus, Jr., Residential Architecture, 1948-1966, at Architecture Center Houston. Neuhaus was the premier gentleman architect for Houston’s elite society in the 1950s. The exhibit includes selected items from the private collection of Graham Luhn, FAIA (a Neuhaus associate for over 20 years) and from the extensive Hugo Neuhaus Collection at the Houston Public Library. Accompanying the exhibit is a thoughtfully investigative short book authored by Ben Koush, comprising a series of essays, an illustrated catalogue, and a foreword by architectural historian Stephen Fox Educated at Harvard’s Graduate School of Design and a fellow classmate of Philip Johnson, Neuhaus, exposed to a Johnson-filtered Miesian doctrine, identified his own version of a Miesian modern rhetoric of “stability, nobility, and enduring value.” As Koush observes, these were, ironically, the same virtues previously associated with classical architecture. As the intention of modern architecture was to overthrow historicism and its associated class-conscious decorative detailing, this represents a fundamental irony. Johnson’s “subversive skill in positioning Mies’s architecture as the socially superior form of modern architecture by 1950 was matched by his efforts to infuse Miesian architecture with historical resonance, especially the memory of classical architecture,” Fox writes in his foreword. Contradictions between the conservative and progressive aspects of midcentury values are noted by Koush, who describes Neuhaus’s adaptation of Mies’s materials, construction methods, and sense of proportions, which he combined with ‘subtle, regional inflections’ to make the work locationspecific and his own. “It is the “phenomenal attributes of Neuhaus’s houses – their clarity, dignity, and proportioned generosity – that guarantee their status as admirable works of modern architecture…,” he adds. Evidently, prevailing taste and sensibilities among 1950 Houston’s privileged were characterized by this and other oppositions. The essay “Courtyard Houses in Texas: The Domestication of Miesian Architecture” describes Neuhaus’s architecture as a reflection of those oppositions. Many of his houses “exhibit the tension between informality and the tendency towards order and restraint that continually animates Neuhaus’s work,” Koush observes. “The rational use of materials – solid brick load bearing walls that wrapped around glass-enclosed living areas under a roof supported by steel columns and beams – established a strong and contradictory relationship of open-to-closed and public-to-private in the Miesian courtyard house…” In 1987, the year Neuhaus died, Anderson Todd, FAIA, wrote (as an epitaph for Cite) that Neuhaus’s work “embodied all that was best about the modern movement.” He notes that the separation of walls from structure and roof allowed for a free and open space, making “the individual one with his world…[a] world that could comfortably encompass various trappings and leftovers from the past.” Of his own work, Neuhaus wrote, “Order is a condition instantly recognizable to the human eye, deceptively simple in appearance but achieved

Neuhaus designed this house in 1949 for his family in the Homewoods section of River Oaks. The house, one of the city’s most important works of modern architecture, was rendered in inkwash by Herbert Cowell. The rendering is on display in the exhibit.

only by constantly sifting away the extraneous.” The catalogue portion of the book, “15 Houses 18 years,” Koush demonstrates the breadth, variety, and high level of refinement Neuhaus brought to his practice: “Neuhaus, working in a city without a long established architectural culture, was able to reproduce in many of the exquisite Miesian courtyard houses he designed the qualities of ‘Baukunst’ (literally, ‘building art’). They represent a rare and inspiring integration of a codified architectural language with ‘utilitarian aspects of building” in ways that referenced the distinctive social culture and [the] physical environment of Houston.” In spite of Houston’s reputation for remarkable heat and humidity and unremarkable flatness, Neuhaus’s houses without fail enjoy lushly vegetated and topographically eventful sites. He integrated his houses into that nature, carefully offering and framing views and, pushing the development of the courtyard house, cooling them and their owners with distinctively Houston touches—shaded porches and patios, delicate trellises, large-leaf subtropical plantings in biomorphic beds, and swimming pools. In his concluding essay, Koush compares Neuhaus’s achievements to Palladio’s (an intentional classical reference) in applying “good form” to his clients’ lives, elevating routine activities by formalizing them and thereby assuring their inheritance: “The social role of Neuhaus’s glass walled pavilions, as well as his ranch type houses, was to reassert the relevance of Houston’s established elites…[as having] a continuing role to play…by asserting leadership in matters of civic stewardship, cultural philanthropy, and resource conservation.” Neuhaus’s architecture of elegant restraint and refined proportions was a good fit for Houston’s elite who avoided drawing attention to themselves and whose wealth certainly could have materialized in showier edifices. continued on page 114