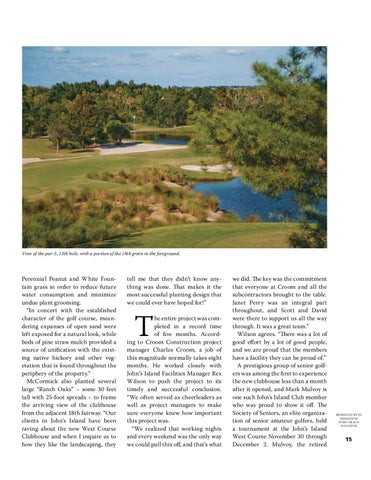 View of the par-3, 13th hole, with a portion of the 18th green in the foreground.

Perennial Peanut and White Fountain grass in order to reduce future water consumption and minimize undue plant grooming. “In concert with the established character of the golf course, meandering expanses of open sand were left exposed for a natural look, while beds of pine straw mulch provided a source of unification with the existing native hickory and other vegetation that is found throughout the periphery of the property.” McCormick also planted several large “Ranch Oaks” – some 30 feet tall with 25-foot spreads – to frame the arriving view of the clubhouse from the adjacent 18th fairway. “Our clients in John’s Island have been raving about the new West Course Clubhouse and when I inquire as to how they like the landscaping, they

tell me that they didn’t know anything was done. That makes it the most successful planting design that we could ever have hoped for!”

he entire project was completed in a record time of five months. According to Croom Construction project manager Charles Croom, a job of this magnitude normally takes eight months. He worked closely with John’s Island Facilities Manager Rex Wilson to push the project to its timely and successful conclusion. “We often served as cheerleaders as well as project managers to make sure everyone knew how important this project was. “We realized that working nights and every weekend was the only way we could pull this off, and that’s what

we did. The key was the commitment that everyone at Croom and all the subcontractors brought to the table. Janet Perry was an integral part throughout, and Scott and David were there to support us all the way through. It was a great team.” Wilson agrees. “There was a lot of good effort by a lot of good people, and we are proud that the members have a facility they can be proud of.” A prestigious group of senior golfers was among the first to experience the new clubhouse less than a month after it opened, and Mark Mulvoy is one such John’s Island Club member who was proud to show it off. The Society of Seniors, an elite organization of senior amateur golfers, held a tournament at the John’s Island West Course November 30 through December 2. Mulvoy, the retired