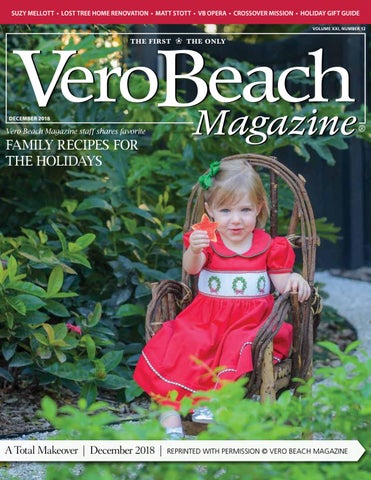 FAMILY RECIPES FOR THE HOLIDAYS

nn Wells has long been a fan of the Florida lifestyle. So much so that for the past several years the chairman and CEO of Commonwealth Bank

and Trust in Louisville, Kentucky, has owned a pied-a-terre in the Sunshine State where she and her family can get away, relax and spend time together. The first was in John’s Island in the 1980s, and, as Wells says, “It was wonderful, and we loved being there, but back then we had small children and there wasn’t a lot for them to do.” There would be more activities farther south, however, so she made the decision to purchase a condominium in Lost Tree Village, a private beach and golf community in north Palm Beach County.

What was once a worn and weary circa-1970s house was transformed into one with distinctive architecture, street appeal and more life.

All was well until her four children grew up, married and came to visit. There simply wasn’t enough room at the Wells Inn. “I told my husband that our sons-in-law didn’t like sleeping in the dining room when they came, and I wanted to have a house, so everyone could have their own bedroom. He said, ‘OK, you can buy one if you can sell the condo.’” That’s exactly what she did. The hunt for a house was on, and it didn’t take long before a real estate agent showed her a listing in Lost Tree. The location was perfect; the house left a lot to be desired. Built in 1978, it was literally stuck in a decade known for avocado-colored appliances and shag carpeting. The couple who owned the house had passed away, leaving it to their daughter, who had no interest in living there or making even minimal improvements in order to appeal to a potential buyer. The “For Sale” sign on the lawn looked as worn and weary as the house did on the inside. “I’ll never forget walking in the door and seeing this huge open space about 36 feet wide and 42 feet long that didn’t seem to have a purpose,” says Wells, who, after viewing the rest of the house, had a number of other concerns; however, they weren’t enough to outweigh the location. It was time to seek professional advice. Fortunately, a builder suggested she contact architect Harry Howle, president of Harry Gandy Howle Architect &amp; Associates in Vero Beach. The two clicked immediately, thanks in large part to a mutual appreciation for Georgian architecture and Howle’s long-standing architectural ties to John’s Island. “J.I. and Lost Tree were both developed by Llywd Ecclestone and they’re both beautiful. When I asked Harry how many homes he had done in J.I., he replied, ‘over 200,’” says Wells, still amused at the impressive number. “From the very beginning Harry and I had a wonderful rapport. I remember telling him I wanted a fifth bedroom and bathroom. I even sketched out my idea of how I thought it could be done and showed it to him. Harry made it happen.” It wasn’t as easy as Wells makes it sound. As Howle explains, “We started with what was basically a derelict house that needed to be either renovated or torn down. There’s no more property available in Lost Tree, and that’s where Ann wanted to be.”

Ann Wells took a leap of faith when she purchased the carved fireplace surround and mantle sight unseen from Sotheby’s in New York. When it arrived, she was thrilled with what has become the “star” in the living room.

It was time to explore options. The first was to simply “freshen” the house. The possibility of adding a second story was also considered. It didn’t take long to determine that the first approach didn’t respond to the family’s needs, and the second turned out to be cost-prohibitive. On top of that, Howle notes there were a number of oth-

The location was perfect; the house left a lot to be desired.

er issues to be resolved. “The houses that were being built back in the ‘70s were much smaller and didn’t accommodate the spaces and products that today’s market requires in a house. “They also weren’t built up to today’s strict building codes, which started in Dade County after Hurricane Andrew in 1992 and have been upgraded and rewritten several times since. The energy code has also become very stringent, so there was a lot of basic structural work that needed to be done.” No matter. The community and lakeside setting won out and Howle rolled up his sleeves. “The decision was made to take a non-distinctive architectural design and have it become one that had more life and street appeal,” he says, referring to sheets of detailed

The formal foyer, with a barrel ceiling and antique furnishings, leads the way into the living and dining room.

The open kitchen and family room has become the family’s favorite place to hang out together.

“before and after” architectural renderings.

worried, but when it arrived I was thrilled,” she enthuses.

“We took the roof off the entire center of the house

Wells is also thrilled with the way everything else turned

and showed we could achieve a really nice effect by raising

out, and can honestly say that throughout the 18-month

the roof to allow for taller walls, and by adding Georgian

rebuilding process there were no challenges, no over-

details, Tuscan arches and dormers, it wouldn’t look like

es with a salute to builder Michael Conville of the Beacon

“In addition, we created these two wings, one for the master bedroom, the other the family room. It was a much better architectural design all around.”

Construction Group. “Mike cared as much about the house as I did. The architectural requirements in Lost Tree are very strict, and I had

additional feet of interior space and another 700 for the

that I felt would be perfect on ours, so I sent him three color

portico and porches, Howle expanded the total footprint to

samples to see what he thought,” says Wells, who happened

to be at a meeting in Orlando

The difference between the

when he got back to her.

house then and now is impres-

“Mike called and told me he

sive. By taking the center of the

had painted samples of the col-

house down to what Howle calls

ors on the house and he asked if I

could drive down and take a look,

into different areas, which gave

“It’s amazing how you can transform a structure.”

so I said I would. When I went to

us a guest bedroom and bath to

“Before, when you entered the house you were presented with this huge unused space with a panel of fretwork, which was popular years ago. We removed the panel and broke the space down

Beach and asked if that would be OK, so I said sure. “When I pulled up in front of the house, the first thing I saw

south side. So now, when you go

ever seen, and I thought, ‘Oh my

through the front door, you enter

God, what must the neighbors

into a foyer with a barrel ceiling

think?’ There I was in this char-

that leads you into the living and

I was going to paint the entire house that color.” Fortunately, the bright pink is

the time,” says Howle, and with a grin adds, “We consider it

nowhere to be seen. In its place a soft pink/coral shimmers

at the sun’s first rays and casts a warm glow at sunset.

While Wells purchased the fabrics and the majority of

Wells purchased the property in 2007, and a year and

furnishings, she sought the advice of Louisville interior de-

a half later she and her family moved into the redesigned

signer Susan Moloney, whom she has worked with several

he needed driven down to Palm

square of the brightest pink I’d

transform a structure. We do it all

said he had a chartreuse Corvette

the north side and a library to the

“It’s amazing how you can

rent a car at the airport, the agent

They all agree the formal foyer is worthy of a stand-

The result is a fun and spirited spectrum of pastel

ing ovation, as are the living and dining room, library, open

personality, partnered with a Georgian elegance that evokes

bedrooms and lanai, where everyone tends to gather after

comfort and camaraderie. For a family that enjoys spending

downtime together in the land of sun and surf, both are a bonus.

As far as Wells is concerned, everything is perfect. “There’s not an inch of wasted space in my wonderfully

Wells herself took a risk when she purchased the carved

livable and beautiful house. Now, when our children come

fireplace mantle and surround from Sotheby’s in New York,

to visit, everyone has their own bedroom and no one has

sight unseen. “I had seen pictures of it and was a little

to sleep in the dining room.” ❀