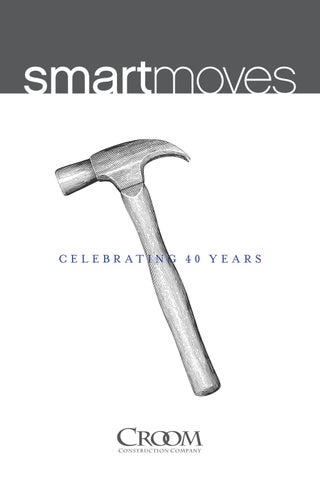 “When building a home, there is never one person who could possibly be adept at doing it all. By virtue of our size and structure, when you hire Croom Construction Company you get the most specialized professionals.” – D AV I D C R O O M

40 YEARS. TWO GENERATIONS. ONE TALENTED TEAM. It was a smart move the day we opened our doors in Vero Beach 40 years ago. From the first day, Croom Construction Company has had one goal in mind: to consistently be the best at building and remodeling custom homes. We achieved that goal early on and, thanks to our talented team, we continue to build upon that success every day. Founded by David Croom on March 1, 1978 Croom Construction built many of the first homes in the private communities of Windsor, John’s Island, and Orchid. That same year we built and sold the first home in John’s Island ever to exceed $200,000. At that time, the cost per square foot was $45! During the 1980’s, we continued building approximately 10 speculative homes per year for John’s Island as well as multiple custom homes. We’ve now built and remodeled more than 1,000 homes throughout our seaside community. David’s son, Charles,

joined the family business in 2005 after gaining more than 10 years of experience at Brasfield &amp; Gorrie, a nationally ranked commercial construction company. Charles quickly followed the mantra of always doing what’s right by your client. We’re grateful for our beautiful community and the people who chose to make it their home. Few places can boast such philanthropic individuals, talented professionals and cultural arts – all of which make it a wonderful place to live. We’re proud to have been a part of the thoughtful development of Vero Beach. To our clients, friends, design partners, employees and family: thank you for 40 fabulous years! We’re primed and ready for many more years of building in the community that we call home.

Croom has won its share of industry accolades over the years, including consistently rising to the top 50 remodelers in the nation. However, our best reward will continue to be a satisfied and happy client.” – D AV I D LY O N S , V I C E P R E S I D E N T

1983 David Croom builds his personal home in John’s Island, making it only one of two homes existing on the island of John’s Island at this point.

1988 Croom Construction breaks ground on the first home on Gem Island in the community of John’s Island.

OUR PARTNERS Croom Construction values the highly skilled design professionals who have worked with us over the years. Mutual respect and good relationships with industry professionals have been key to our success. From the architects who listen intently and interpret our clients’ vision with precision to the engineers who ensure every attention is given to site and structural challenges, we commend you. To the interior designers and landscape architects who beautifully add the finishing touches that make each house a home, we sincerely appreciate you. We’ve worked with the best design professionals in the industry and their creativity never ceases to amaze us. Thank you for 40 wonderful years!

Our team breaks 1996 Recognizing that1988 thereOur are1990 team numerous breaks onhome the first home reasons why ground clients want on ground thetofirst reinvent built in theinnew, what they already own, Croom on Gem Construction Island theseaside community of Windsor. adds Homecommunity Renovations ofto John’s its suite Island. of million More than $90 services. The value this adds quickly worth of new Windsor homes becomes recognized on a national level.have since been builtinby Croom Qualified Remodeler will later rank CCC Construction the top 500 remodelers in the nation.Company.

To David and the entire Croom Construction team, thank you for helping build our beautiful community. 31 years ago I had the pleasure of joining this journey with you. Here’s to creating many more architectural classics together. Happy 40th Anniversary! – HARRY GANDY HOWLE, HA R RY G A N DY HOW L E + A S S O C IAT E S

sr John’s Island Real Estate Company congratulates Croom Construction on their momentous 40th Anniversary. Known for their attention to detail and quality craftsmanship, Croom has been an integral part in maintaining the John’s Island standard since 1978. It is a privilege to say that they are always responsive to our clients’ needs. – B O B G I B B , J O H N ’ S I S L A N D R E A L E S TAT E C O M PA N Y

1996 Croom Construction adds Home Renovations to its suite of services. The value this adds quickly becomes recognized on a national level. Qualified Remodeler will later rank CCC in the top 500 remodelers in the nation.

1997 Precision Painting &amp; Waterproofing, our residential and commercial painting division, opens its doors. It has since painted the town for the finest homes and commercial buildings along the Treasure Coast.

1996 Recognizing that there are numerous 1997 Whitehall Professional reasons why clients want to reinventProperty Management, an affiliate of what they already own, Croom Construction Croom Construction, is opened adds Home Renovations to its suite of for business. Whitehall sets a new services. The value this adds quickly standard in the home building industry becomes recognized on a national level. by introducing total property Qualified Remodeler will later rank CCC in management and maintenance to the top 500 remodelers in the nation. help ensure the long-lasting quality of their clientsâ&amp;#x20AC;&amp;#x2122; homes.

2010 By the end of this year, we had completed over 200 home renovations. Croom Construction rises to the top 50 companies in the nation, as ranked by Qualified Remodeler.

David and I have been friends and business colleagues for over 30 years, and we started our businesses the same year. Since then, the Croom and Spectrum teams have collaborated successfully on hundreds of projects. Congratulations to our dear friends at Croom Construction for 40 years of excellence! – SUSAN SCHUYLER SMITH, INTERIOR DESIGNER

“The foundation of our company is strong because of the guiding principles on which my father started the company. They remain the same today: always do the right thing by your client, deliver only the highest of quality and employ only top professionals throughout the organization. These are exciting times as I continue to build on these principles. I believe we are primed for a bright future here at Croom!” –CHARLES CROOM, VICE PRESIDENT

As a family owned business, we have long believed that investing in our employees and their training reaps rewards for everyone. Family focused events are now a tradition. Croom Construction is proud of our employees, many who have been with us for decades.