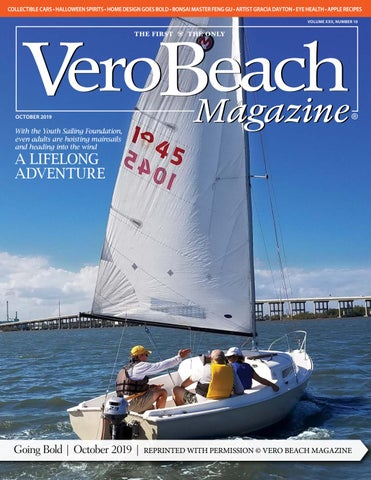 With the Youth Sailing Foundation, even adults are hoisting mainsails and heading into the wind

While strolling along the beach, Cathy and Steve Furnary saw a house that was just the right size. When they spotted the “for sale” sign, they knew it was meant to be theirs.

hen Cathy and Steve Furnary received a call from friends living in John’s Island inviting them to come for a visit, the couple from Rye, New York, started packing their suitcases. Steve, an

avid golfer, couldn’t wait to check out the private community’s three championship golf courses, while Cathy was looking forward to the warmer weather.

Opposite: Twin benches bright with designer pillows and an open lantern-style chandelier in the foyer offer an inviting welcome to the Furnarys’ beach cottage.

Not only was the golf better than advertised, so were the sunny skies, balmy breezes and friendly folks they met along the way. It didn’t take long for Cathy and Steve to fall in love with the John’s Island lifestyle and start thinking about having a place of their own there one day. That day came a few years later when the couple decided to look at real estate listings, following up with an in-person tour of houses that held an initial appeal. Cathy would get excited, go back home and mentally start decorating the places she had seen and liked. It soon became obvious that Steve wasn’t as excited about the idea of owning a house as she was, so Cathy wisely suggested they check out condominiums. “Back then condos were selling like hotcakes, and we found a three-bedREPRINTED WITH PERMISSION © VERO BEACH MAGAZINE

room townhouse overlooking the ocean. It gave us a presence, a place to come to and bring our family. It was just what we needed at the time,” she says. On a sunny afternoon five years later, Cathy and Steve happened to be strolling along the beach and there, up ahead, was a British West Indies-style single-story house sporting a “for sale” sign. In comparison to other residences

“I had initially wanted an all-white kitchen, but at the same time Steve and I wanted a fun house, so I chose color.” – CATHY FURNARY

they had seen, it wasn’t too big and it wasn’t too small; it was just their size. They looked at each other and smiled, and Steve made note of the contact information on the sign. A tour of the interior a few days later had the couple smiling even more. “The house was in good condition, but it was dated,” Cathy says. “We saw things we wanted to do, changes we wanted to make, which was OK because Steve and I are quintessential renovators, so we made a spontaneous decision to go for it. We asked who the original architect was and learned it was Harry Howle, who we immediately fell in love with.” The feeling was mutual. “Cathy and Steve wanted a relaxed seaside cottage with an open floor plan that was strikingly different from the more formal one that was built in 1987,” says Howle, recalling the time when retired IBM vice president Francis “Buck” Rodgers asked him to design a residence for a beachside property he had recently purchased. Three decades later it was the Furnarys who were doing the asking. High on their wish list was the need to have more activity space while not expanding the original footprint. When they took a close look at the basement storage area with its 9-and-a-half-foot ceiling, they saw possibilities. “We have three grown sons and three very young grandchildren who all love to come down and spend time with us, so we asked Harry if there was something we could do with the basement to make more room,” Cathy explains. Howle turned to his drawing board and came up with

Cathy initially envisioned an all-white kitchen. That changed when she decided to go bold by choosing green quartzite countertops and bright blue chairs for the cozy eat-in area.

the answer by designing a lower level perfect for entertaining family and guests. The 2,000-square-foot under air space is now home to a game room, fitness area, bathrooms, an elevator and additional garage and storage areas for bicycles, kayaks and beach gear. “We were able to accomplish this because we had designed the original home at an elevation of 26 feet above mean sea level, situated above a crawl space,” says Howle. “We determined that by excavating 12 inches of sand we could pour a floor slab and accommodate an appropriate ceiling height to develop the additional lower level.” Next on Cathy and Steve’s wish list was their desire to have an open floor plan, with one room flowing into another. Again, Howle worked his magic by eliminating a wall that separated the kitchen, living and dining rooms. By adding textural finishes such as tongue and grove wood ceilings with boxed beams, he was able to enhance the casual cottage-style feel Cathy and Steve desired. Once the architectural design was finalized, Ed Reilly and his Reilly Construction crew arrived on the scene. So did Cathy and Steve. “We told Ed we would be involved, and we were. We still had our condo, so I was able to stay there and be on site often during the construction phase. Steve is still working, so when he could, he was there also. “I was impressed by the people I met, talked with and got to know — the builders, the plumbers, electricians, tile workers — they were all people who live and work in this community, and they made us appreciate Vero Beach even more,” Cathy enthuses. “We closed on the sale of the condo before they were finished with everything, and they went so far as to set up a room for me downstairs so I could stay in the house. I’m sure they got tired of me being there but they never showed it. They were great.” Throughout the yearlong construction phase, Cathy not only saw the desired transformation take place, she also had time to let her creative muse fly free. “I love to decorate — it’s my passion,” she says, a happy lilt in her voice. “I had done our condo, so when everything was ready, we moved all of the furnishings from the three bedrooms over to the house.

With the open kitchen, dining and living rooms, functions flow freely. Cathy had coveted the twin crystal dining table chandeliers since spotting them in Nantucket and got lucky when she found the exact ones in High Point, North Carolina.

Cathy let her well-honed decorating muse have fun in the open living-dining area, where she chose a deep shade of blue for the built-in cabinetry, repeating the striking hue in the rug, upholstery and console lamps.

At first, Steve was reluctant to update the pool and surrounding area, even though everyone else said it was necessary. When Harry Howle designed a slightly elevated pool with a stone deck, he happily changed his mind. “One of my favorite things is doing light fixtures,” Cathy continues, pointing out the two crystal look-alikes hanging above the dining room table and another shedding its warm glow over the kitchen island. She had seen and admired them during a stay in Nantucket and had taken pictures, hoping to find the same or similar ones for their Vero Beach home. She got lucky during the three days she spent in High Point, North Carolina, known as the premiere destination for quality furniture by designer brands.

“We saw things we wanted to do, changes we wanted to make, which was OK because Steve and I are quintessential renovators, so we made a spontaneous decision to go for it.” – CATHY FURNARY

“I was familiar with what was available in High Point because my dad, who was in the furniture upholstery

What wasn’t as much fun was deciding where best to

were rarely, if ever, used. When choosing the color of paint for the cabinetry surrounding the fireplace, she told Stein she was considering a deep shade of blue. He agreed, adding two words: “Go bold.” And she did. The going bold concept carried over to the kitchen, where quartzite countertops in shades of green gleam. “I had initially wanted an all-white kitchen, but at the same

they were going to redo the pool, even though everyone, including family members, kept telling him it needed to be done. It took awhile, but Steve finally agreed. As Cathy says, “The whole house was coming to life, but the pool made it look old. It was like wearing a brand new suit or dress with old sneakers.” The couple again turned to Howle, who designed a

time Steve and I wanted a fun house, so I chose color,”

new, slightly elevated pool with stone deck that leads the

she says, recalling some of the more adventurous decorat-

eye to the sparkling waters of the Atlantic Ocean. It’s a

ing decisions she made.

family magnet and frosting on a winning design.

business, was transferred there,” says Cathy, who crossed

put the television, so Cathy decided to confer with Howle’s

her fingers when she went inside one of the lighting

stores in the area. “I pulled up the pictures I had taken

often spent time there while renovations were being made.

ber Steve saying to me, ‘What’s the point of a having a

a house on the beach, but here we are, and we love it; so

of the chandeliers I was looking for and showed them to

“Five years earlier I would never have thought of putting a

glassed-in lanai?’ so we opened it up and made it into a

do our children and grandchildren,” Cathy beams, noting

the sales associate, who led me to where the same exact

TV over the fireplace in the living room, but James said if I

covered porch. It made all the difference in the world, and

they now have room for all the family activities.

chandeliers were hanging. It was amazing. That’s the kind

wanted people to spend time there I needed to have a TV,”

it’s one of our favorite places to be.”

of thing that is so much fun for me.”

“The project grew as we were going along. I remem-

Cathy also recalls Steve telling her there was no way

“We were the last people I ever thought would own

“March and April are my favorite months. Steve and I appreciate Vero Beach more each year we’re here.” &#96;

When homeowners, Cathy and Steve Furnary discovered this beauty by the sea they turned to the original architect, Harry Gandy Howle. The couple wanted a relaxed seaside cottage with an open floor plan that was strikingly different than the more formal one requested by retired IBM VP, "Buck" Rodgers in 1987. Three decades later, this oceanfront residence has an expanded footprint and plenty of space for family activities. Read how Harry and his team brilliantly solved the expansion challenge and gave the homeowners exactly what they wanted.