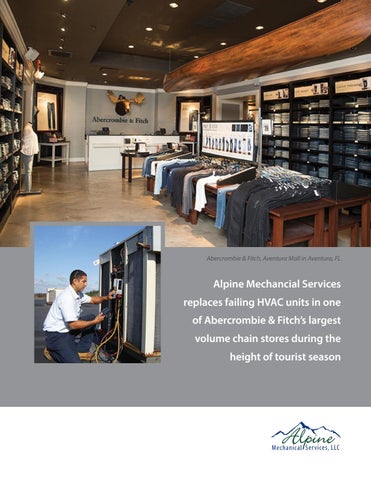 In January 2016, Alpine Mechanical Services replaced HVAC units in one of Abercrombie &amp; Fitch’s highest volume retail stores located in the popular Aventura Mall, the third largest mall in the nation. The project mission was clear but complicated: remove two, 15-ton split air-conditioning systems that were failing due to the harsh coastal environment and replace with new units without disrupting customers, assciates, and neighboring retail stores. Since the store still needed to operate, fifty percent of the system had to be working and running at all times. Colby Mekus, LEED AP for Abercrombie &amp; Fitch Co. said, “We were in a very tough position with the age and condition of the units. It was a challenge to find a mechanical contractor interested in the project due to tough field conditions and our requirements “Alpine Mechanical was the only contractor for replacing a system within an open store. Alpine to accept the challenge and they exceeded Mechanical was the only contractor to accept the challenge and they exceeded our expectations.” our expectations.” Alpine Mechanical Services completed the work within a short, two-week timeframe. Abercrombie &amp; Fitch never experienced interruptions in business and its customers never had to deal with uncomfortable shopping temperatures. Mark Barraclough, President of Alpine Mechanical Services said, “We orchestrated a highly successful operations plan to reduce downtime. This project was timesensitive and occuring in a Level 5 mall, so every day was critical to operations. Twelve days of the two-week project were spent conducting prep work.” The store’s air handlers were located in the stock room, requiring all inventory under the units to be relocated while lights, sprinklers and the units were

removed. Alpine Mechanical Services ran four new line sets of piping, each 200 feet in length, out of Abercrombie &amp; Fitch, through the mall’s egress corridor, up through another store and to the roof. Each day the refrigerant lines had to be pressurized until the roof was reached. This strategy alone was a week-long process, but necessary to keep both units functioning properly at all times while the other was removed and replaced. The key to the successful precision of the project was Alpine Mechanical’s coordination of the General Contractor, roofing contractor, electrician, rigging company and stuctural steel contractor, as well as mall management. “Projects of this magnitude likely incur a few problems, but with the collaboration and patience of our store’s team, as well as Apline Mechancial’s field teams preparation and coordination, the project was completed quickly and successfully,” Mekus said. Despite the complicated scope of work facing Alpine Mechanical Services’ team and the requirements of the Abercrombie &amp; Fitch’s chain store, the HVAC project was completed on time, on budget, and without interruption to daily business. Most notable was the pre-planning, cooperation, and coordination success across all teams.

Alpine Mechanical Services, LLC is a self-performing leader in commercial and retail HVAC preventative maintenance, energy efficiency and repair services in 12 states along the East Coast. For more information, visit www.AlpineMechanicalServices.com or email info@alpinems.com. Abercrombie &amp; Fitch Co. is a leading global specialty retailer of high-quality, casual apparel for Men, Women and kids with an active, youthful lifestyle under its Abercrombie &amp; Fitch, abercrombie kids and Hollister Co. brands. At the end of the fiscal year, the Company operated 754 stores in the United States and 178 stores across Canada, Europe, Asia and the Middle East. The Company also operates e-commerce websites at www.Abercrombie.com, www.abercrombiekids.com and www.HollisterCo.com.