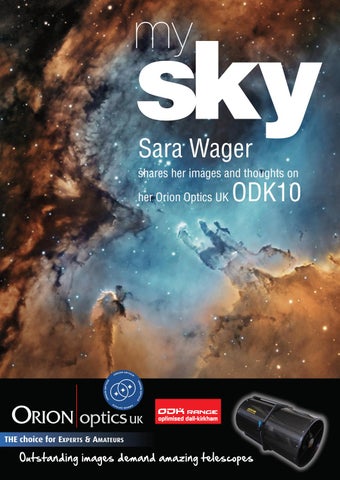 shares her images and thoughts on her Orion Optics UK

THE choice for EXPERTS &amp; AMATEURS

AKE NO BONES ABOUT IT : SARA WAGER doesn’t consider herself an astronomer. She doesn’t look through the scopes, she knows little about the science behind the images she produces and she really has little knowledge about the sky around her. So what pushes her to produce some top class images . . . well . . .

The ODK10 puts a smile on her face night after night

Sara moved to Spain in 2010 and having enjoyed daytime photography in the UK, felt that astrophotography would be an easy enough transition to produce images that she’d seen in books and around the net. This was probably the most understated assumption that she’d ever made in her life! The astro imaging bug took hold and very soon she’d had an observatory built in her garden and gone through many different kit upgrades.

Observatory and conditions Sara had a roll off roof observatory built in her garden in Spain.

Unconventional as usual, it’s built of brick, surrounded by tonnes of concrete, built on a flat roof and the pier is not sitting on a cubic metre as generally recommended. It’s a small space that was constrained in size by the existing terrace that was on top of a building in her garden. Everyone thinks that she has the darkest of skies and perfect conditions. This is sadly not the case. She lives about 20km from Spain’s third largest city, Valencia. To that end, while her easterly views are reasonable, to the South she struggles with the Sky Glow from Valencia, so much so that she only does narrowband imaging to the South.

felt a little limited by its speed at f8. Small and faint targets took a lot of data. She did think about using a reducer in order to speed the system up, but then she would have lost considerable focal length, which was a compromise too far. A longer focal length scope (minimum of 1500mm), ease of use and collimation and faster than f8 was the Holy Grail and after much searching she looked very closely at the ODK range from Orion Optics. She spoke with a couple of astronomers using Orion Optics equipment and they were

was using, an Avalon Linear Fast Reverse. She settled on the ODK10. She was using this with the Kodak KAF8300 sensor, which meant that her resolution was rather small (0.66 arc seconds per pixel) but it gave her a field of view that she wanted and also meant that the mount would be able to match the resolution without too much difficulty. The ODK10 was ordered and took 3 months to arrive. The crate was huge! She followed all the information supplied from Orion

The route to the ODK10 She currently uses two imaging combinations. For the short focal length she uses a Takahashi FSQ85 with coupled with a mono camera with the well renowned Kodak KAF8300 sensor. This ensures that she can image larger targets. A couple of years ago she started to think about the longer focal length targets and initially bought a cheap second hand C9.25 in order to see if she enjoyed this aspect of imaging. She did and so she changed to an 8” RC scope. This was a good scope, but she always

positive about the equipment that they used. A few phone calls to Barry and she felt satisfied that by purchasing an ODK from Orion Optics she was getting the best in terms of focal length, ease of use and speed that was available.

Optics regarding the collimation. It is supplied with a Ronchi grating in order to get the spacing right between the secondary and primary mirrors. The instructions were easy to follow. Orion Optics had machined and made up the necessary adapters so that the The next choice was the size of the spacing from the corrector was scope. This was influenced by price exactly right for the QSI. All in all, and also the existing mount she it was a pain free process.

How does she feel about the ODK10 after almost a year? To say that she loves it would be an understatement. She has been awarded an APOD by NASA for one of her images as well as having numerous images published in UK Astronomy magazines….. all images taken with the ODK10.

It has been fitted with a Lakeside Auto focuser and she uses it with SGPro to get consistent results night after night. Almost an automated setup now, she only has to open the roof and the rest is controlled from the comfort of her sofa. The luxury of living in Spain is not only more clear nights (don’t be fooled though there are still weeks from one clear night to another), but that throughout the year it’s possible to image. In the height of summer she still gets a minimum of 5 hours of darkness. The ODK continues to delight and there are many more targets left that she wants to image. Her main interest is narrowband imaging and she enjoys finding the areas of interesting in the larger nebulas and really showing them in ways that are often not captured. The ODK10 puts a smile on her face night after night and she feels that this is a ‘forever scope’ to get those captivating secrets. Would she change the ODK10? Only for a larger ODK scope from the range!!!! All astro images featured taken with ODK10 by Sara.

The Eagle Nebula Messier 16 (M16) is a conspicuous region of active star formation, situated in Serpens Cauda. The starforming nebula, a giant cloud of interstellar gas and dust, has already created a considerable cluster of young stars. The cluster is also referred to as NGC 6611, the nebula as IC 4703.

NGC 7635, also called the Bubble Nebula, Sharpless 162, or Caldwell 11, is a H II region emission nebula in the constellation Cassiopeia. It lies close to the direction of the open cluster Messier 52.

The dark and brooding dust clouds outlined by bright ridges of glowing gas are cataloged as IC 1871. About 25 light-years across, the telescopic field of view spans only a small part of the much larger Heart and Soul nebulae. At an estimated distance of 6,500 light-years the star-forming complex lies within the Perseus spiral arm of the Milky Way, seen in planet Earth&#39;s skies toward the constellation Cassiopeia.

M101, The Pinwheel Galaxy (Spiral Galaxy) is a large face-on spiral galaxy located 22 million light-years away in the constellation of Ursa Major. At mag. +7.9, it can be glimpsed in binoculars or small telescopes from dark sites but suffers from low surface brightness and in bad seeing conditions or light polluted areas.

NGC 1333 a reflection nebula, dominated by bluish hues characteristic of starlight reflected by dust. Some 1,000 lightyears distant toward the Constellation Perseus, it lies at the edge of a large, star-forming molecular cloud.

NGC 4565 (The Needle Galaxy) is an edge-on spiral galaxy about 30 to 50 million light-years away in the constellation Coma Berenices. The 10th magnitude galaxy sits perpendicular to our own Milky Way galaxy and is almost directly above the North Galactic Pole.

IC 1848: The Soul Nebula, a large star forming region found in the direction of the constellation Cassiopeia. Located about 6,500 light years away, the Soul Nebula spans about 100 light years and is usually imaged next to its celestial neighbour the Heart Nebula (IC 1805). The featured image is a detailed portion of &quot;the Soul&quot;.

As manufacturers of the ODK Range, Orion Optics UK are delighted with both Sara’s choice of telescope and her excellent images. Barry Pemberton, Consultant at OOUK is keen to stress that Sara’s ODK10 model is just the same model anyone can purchase from their website.

Any prior questions re technical aspects and camera attachment etc. were ably handled by Barry and John at OOUK. Barry tells us that the ODK is just one of many successful telescope ranges manufactured by themselves and in use all over the world. He says, “we want our customers to get the very best experience from their chosen aspect of astronomy, where we excel is providing only the very best optical components that make our instruments stand in a class of their own, John and myself are alway just an email away to ensure you are aware of the facts you need to marry your telescope to the camera of your choice to get maximum image quality.” The full ODK range is based on a focal ratio of f6.8, fast enough for some superb deep sky photo-visual use and, still have enough focal length for high resolution planetary work both visual and CCD applications. ODK’s are available as 10, 12, 14, 16 and 20 inch aperture. The tube is constructed from Carbon Fibre sandwich design. Very, very strong to avoid flexing and, zero expansion to ensure the focal plane does not change over long photographic exposures. Being an open tube design and very short, cool down times are remarkably fast. To assist cool down of the telescope, each model is fitted with three fans, all positioned behind the primary mirror.

Everyone has their own specific requirements when it comes to telescope choice and use. Orion Optics produce other telescopes as well as the successful ODK range of Optimised Dall-Kirkhams. A full range of products can be seen on the next page and a visit to the OOUK website will provide a wealth of information for all astronomer skill levels. As Barry says: “ We could blind you with science here and quote facts and figures but when it comes down to it, it is just as Sara Wager says - the ODK10 puts a smile on her face night after night and if she can produce stunning images like the ones presented here - anyone can - with a little help from Orion Optics UK of course!”

Barry (left) and John Pemberton are always on hand to assist with technical questions and advice as to the suitability of all their products.

The heart of a good telescope high quality optics.

quality equipment . . . for the discerning astronomer!

Visit our website for complete details and buying options of all our Telescopes, Spares, Accessories &amp; Services. See images taken with our telescopes in the image galleries just follow the link on the home page.

THE choice for EXPERTS &amp; AMATEURS

ALL Orion Optics UK Telescopes are made in the United Kingdom 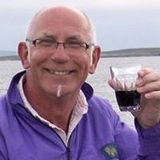