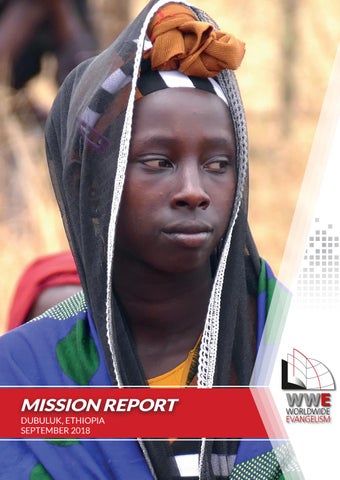 „... BEING CONFIDENT OF THIS, THAT HE WHO BEGAN A GOOD WORK IN YOU WILL CARRY IT ON TO COMPLETION UNTIL THE DAY OF CHRIST JESUS“ PHILIPPIANS 1:6

Dear friends! From 22 to 26 August we were in the far south of Ethiopia for an evangelistic outreach among semi-nomads. It took two days to get there with our bus. We were in the village of Dubuluk. Six small churches invited us to hold a public evangelistic outreach there. We were on the premises of the largest church in the village. 90% of the population are Muslims. It was just a “small” outreach, but we got a fantastic response. More than 100 people followed the altar call and gave their lives to Jesus. We saw many healings and God confirmed the preached word with signs and wonders that followed. People suffering from pain were healed, blind eyes and deaf ears were healed, paralysis was healed. There was great joy and excitement, and people wanted us to stay longer. We have our next outreach in Ethiopia from 19 to 23 September. We are currently also translating several study courses by Kenneth Hagin into Amharic and later plan to translate them into the Oromo language. We expect that to be finished by the end of the year. Most of the leaders and pastors in Ethiopia are laypeople and we want to have thousands of these study books printed and distribute them free of charge to pastors, leaders and believing Orthodox priests.

Each book contains 26 study units that every Christian should learn. Just as children learn to read, write and do their multiplication tables at school, every Christian should know these basic truths of faith: how to have faith, how to pray, how to receive healing and how to receive the gifts of the Holy Spirit. These courses have the potential to bring positive change to the spiritual landscape of Ethiopia. We have also ordered a completely new set of equipment for Nigeria: a truck and trailer, a sound system and a generator. We hope that everything will have arrived in Nigeria by the end of the year. God is in the process of expanding and stretching us, so we also need more finances. We pray that new financial sources will open up and that we can do everything we have on our hearts.

“... being confident of this, that he who began a good work in you will carry it on to completion until the day of Christ Jesus” Philippians 1:6. Wishing you all the best and God’s abundant blessing,

For years he had been deaf. He is delighted about his healing.

This woman was blind in her right eye. Jesus still opens blind eyes. Her right ear had been deaf for two years. Now she can hear again.

She could not control her hands and feet and was handicapped. She’s happy about her healing. She had been suffering from constant bleeding for six years. Jesus healed her like the woman with bleeding in the Bible. She had been almost blind for two years – now she can see clearly again!

Fifteen years of abdominal pain and kidney disease are over.

ARE WE FLAMMABLE OR FIREPROOF? by REINHARD BONNKE

The book of Acts reads better than any modern novel. It has clearly defined characters - some in leading roles and others as supporting cast. It has action, adventure, triumph and tragedy. The scenes change from Jerusalem to Damascus to Antioch to Rome, from prison cells to shipwrecks. We encounter the wind of the Holy Spirit and the emboldened peasant apostles who moved in phenomenal miracles and baffled government leaders of their day. However, these great apostles were not always distinguished nor did they always act nobly. I was startled when I read in Mark 16:8 that the disciples, before Jesus ascended to heaven, did not believe. The same unbelief is found in Mark 16:11. Then, two verses later in verse 13, the same four words - they did not believe. Again, in verse 14, the same four words - they did not believe. They were a bunch of unbelievers! But what amazes me most is the fact that in the next verse, verse 15, Jesus said to these unbelieving and fearful believers, „Go into all the world and preach the Gospel to every creature.“ If I had been there, please allow me to say this, I would have approached Jesus from behind and whispered into His ear, „Master, Lord, don’t You know that the disciples You just gave the Supreme Commission to are a bunch of unbelievers? They will never be able to do it.“ I think Jesus would have turned around, put His finger over His lips and said quietly to me, „Bonnke, you don’t know that I have a secret.“ What was the secret? Something happened between verse 14 and verse 20. In verse 20, we read, „They went out and preached everywhere, the Lord working with them and confirming the Word through the accompanying signs, Amen.“ What happened between verse 14 and verse 20? Chronologically, Acts Chapter 2 happened.

The disciples walked out of weakness and arrived at the power to do what Jesus had commissioned them to execute after He ascended to heaven: „But you shall receive power after the Holy Spirit has come upon you, and you shall be witnesses to Me in Jerusalem and in all Judea and Samaria and to the end of the earth“ (Acts 1:8). In the same way, we all can leave weakness and step into unending power. Power is the essence of the Christian witness. It is not a Gospel accessory. It is not the bell on a bicycle - it is the whole machine! There is never the slightest hint that some disciples would be powerless. To be blunt, Christianity is either supernatural or nothing at all. We had - and we still have - a supernatural church, with a supernatural Gospel and a supernatural Bible. Take the miraculous away and you have taken Christianity’s life away. The Church becomes an ethical society or a social club when it is intended to be the grid system for transmitting the power of God into this powerless world. You and I are conductors of God’s power to the world! The Holy Spirit and the Gospel of Christ’s redeeming love are inseparably tied together in the bundle of life. If you want to see the power of God, then ignore all the techniques, manipulation and psycho-suggestion and simply preach the Word! That is where the power of God is released - right in the Gospel. I do not take only one thing out of God’s treasure chest. I proclaim the whole Gospel, which contains everything that we human beings need - salvation, forgiveness, healing, peace, hope and deliverance. I want to challenge your thinking on the Holy Spirit and inspire you to believe in the amazing power of the Spirit within you. There is a dynamic, dead-raising power on the inside of you. God has made it available to every believer. There is no excuse for weakness against sin or evil. After all, we can do all things through Christ who strengthens us (Philippians 4:13). (Excerpt from Reinhard Bonnke’s new book: HOLY SPIRIT: ARE WE FLAMMABLE OR FIREPROOF?)