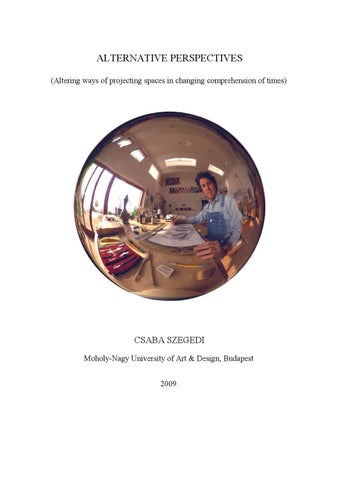 Pondering in front of the canvas, above the drawing desk or behind the students’ drawing tables we – creative artists, architects, designers and teachers – probably all can daily face the challenge of visualizing and depicting imaginary ideas or seen spaces and sceneries. Representation (depiction), visualization, the problems of visual communication belong to the basic questions of visual arts as well as of architecture and design. Still, usual practice (even on a higher professional or educational level) deals with the conventional methods in a rather conservative and stereotype automatism. Each application, each profession, each culture and each age has its own ways of visualization and technique of representing forms and spaces.

The multitude of possible ways of depicting the world around is wonderfully traceable in the history of art and design, and the reason of why altering cultures developed, adopted and used so diverse types of representation must be found in their different ways of seeing, in their altering comprehension of space and in their philosophical approach to the surrounding universe, that is in their different world view. Picture is a manifestation of comprehensive space. The history of painting is the narration of the conflict between real space and the superficies of the picture. Space as it is seen is different from Space as it is. Our vision – the way we see the world around us – is determined by objective and subjective factors, like the evolution-biological build of our body, our psychological and mental conditions, knowledge, historical and philosophical identity. Space as it is depicted is different from space as it is seen.

Central perspective is so natural and obvious for us, but it is far not the only way of imaging the world. It is an extraordinary practical, effective and impressive way of projecting space (the surrounding world) showing it from a single individual point of view. It is the expression of the „enlightened” egocentric worldview of our modern age since the quattrocento. No wonder about its incredibly successful career during the past six centuries in Europe and in the global western culture migrated from European culture. Perspective is so powerful that it was able to survive the offensives of 20th Century’s modern art movements (the appearance of a changing paradigm) and it is still dominant on the imaging due to its photographic, motion picture, and digital computer applications. * The different cosmological conceptions from Ptolemy’s geocentric world model to the current idea of multiple universes demonstrate the diversity of mankind’s approach and comprehension toward the surrounding space and the cosmos. Nevertheless they all correspond with one another in the fact that each model builds up systematic rules and regularities in the chaos. The optical, biophysical and biochemical processes of our seeing are probably the very same since thousands and millions of years. Evolution biologists say that our anatomy is still at the stage of the savanna man. The speed of the cultural, scientific and technological development of our civilization is incomparable with the tempo of the evolution. Our vision is primarily determined by our physiological build, and this becomes obvious when we compare our visual organs with other species. We humans, like other predators, see stereo due to having both eyes on the front of our face. Thus we are able to focus and perceive plasticity and distance in space with sharp sight. Therefore we had to sacrifice the wide angle of vision

which is the privilege of the prey animals. Their vision is defensive in contrast with our offensive way of looking. Some animals like fish or birds can see the whole space around themselves in 360°x360°. Imagine what a dragonfly can see!

Our field of vision is rather narrow (~180°x120°), and the scope we use for an average representation is even more narrow (~10-30°). In comparison with the surrounding total space its proportion is like the plug cut in a melon. We see prospectively within a narrow visual cone but we perceive a total spherical space around us by turning and looking around. Conventional pictures expand only to a narrow scope of the potential sphere of space, and this is a crucial contradiction between the psychophysical space perceived and the space depicted in an image.

Traditional perspective systems can depict the view prospected through this narrow scope. The perspective system – as Giambattista Alberti determined it – is the intersection of the picture plane with the pyramid of vision (pyramidale visiva/Euclid). In geometry the image is created by the rays of projection crossing the picture plane. In case of parallel projection the center of the projection is in the infinite – this is the modus of axonometry.

Creating an image in axonometric modus results in massive, vivid volumes of forms and, comparable proportions and measurements at the same time. Therefore it is a standard way of visualization in architectural and product design. In central projection the projection’s center is in the finite space – that is the modus of central perspective. The correlation between the point and the scope of view, the superficies of the picture and the represented space results in different perspective modes.

Each different mode of perspective system has its own character and each modus is efficient for certain purposes.

1 point perspective is the basic hit. Its simplicity, efficiency and harmony with the planar picture’s edges resulted in the long lasting success of the image type “Raumkasten”. This modus dominates the history of painting through centuries of the perspective convention, notwithstanding the two and three point perspective systems invented rather early.

2 point perspective achieved its popularity with the appearance of the photography, since this quick way of picture making allowed spontaneous point of view and accidental compositions. This way of seeing influenced impressionist paintings and this modus is the most common perspective system today. It dominates photography, study drawing, and most pictures we daily receive, therefore people today have photographic way of seeing. When architects and

designers want to visualize buildings, products and environments as they will look in reality, they use 2 point perspective to imply an illusion of general view.

3 point perspective is a very expressive way of showing the position of the viewer toward the represented objects on the picture. Birds view or worm’s eye view both are results of a tilted picture plane forward or backward from vertical. This modus can represent space prospected within a wide angle of scope. In spite of the beauty of all pictures ever made in the perspective convention there is no perfect rectilinear (planar) perspective system. All they create peripheral distortion. Due to their planar picture surface the projection is right angled in one and only point so the picture is proportional around the main point only. The rays of projection are more and more oblique toward the edges so they give a distorted depiction.

Another way to avoid peripheral distortion is incurving the picture plain around the viewer. That results in curvilinear perspective, an alternative to traditional planar and rectilinear systems.

The first kind of curvilinear perspective is the cylindrical panorama, in which we brighten the angle of view horizontally or vertically so a whole slice of the space around us can be represented on a cylindrical superficies of the picture. This is 4 point perspective because the two horizontal directions of the Cartesian coordinate system have each two (altogether four) vanishing points. Lines parallel to the vertical direction remain vertical and parallel in this system, but all other lines will curve between their vanishing points. This modus can be very effective for presenting interior rooms or architectural environments like an urban panorama.

With My students at the Moholy-Nagy University we explore different ways of visualization and space representation in drawing classes. These experiments include drawing in axonometry, 1-2-3 point rectilinear perspective, and even alternative curvilinear perspective systems like cylindrical or spherical panorama (4 point and 5 point perspective) and 360 x 360Â° spherical images. As a result, students can distinguish and employ perspective systems and methods in design according to the actual expression required. Creating an experimental cylindrical panorama drawing was a design project as ell as it resulted in studentsâ&amp;#x20AC;&amp;#x2122; more comprehensive approach in viewing and representation of space.

Cylindrical perspective still owes to show fields of the total space above and below. The concave superficies of the hemispherical panorama (fisheye view) resolves this problem. In 5 point perspective the half dome of the total space can be represented. This system is an extended curvilinear alternative to the rectilinear 1 point perspective, with the picture-plain incurved around us so that the edge of the picture will be a circle, practically the boundary of our total field of view. The transversal (the horizontal and the vertical) directions have each two (altogether four) vanishing points on the edge of the boundary circle and the orthogonal lines converge into their vanishing point in the centre of the circle. Lines parallel to the orthogonal direction remain straight, but all other lines will curve between their vanishing points. This modus, like fisheye view, can represent space within a wide angle up to 180°.

If this hemispherical system turns from being parallel and right angled to the Cartesian directions of the represented space, all three Cartesian directions will each have two vanishing points. This system is the 6 point perspective, practically an extended curvilinear alternative to the rectilinear 2 point perspective. Another alternative to 6 point perspective is the total 360°x360° spherical panorama which is an extended five point perspective. This system represents – besides the frontal hemisphere in front– the other half dome behind the viewer as well. It represents the total sphere of space with a hemispherical 5 point system and the other hemisphere around it. The sixth vanishing point is a circle around the boundary of the five point perspective. This gives a rather distorted picture of the rear hemisphere so it is not very practical in planar representation. Nevertheless its geometrical construction is possible and this is currently being a brilliant research project of Prof. Brigitta Szilágyi and her students Ágnes Urbin and Dániel Lőrincz at the Technical University in Budapest. They intend to present this method during the conference. On the other hand, if we do not lay it out on the plain, spherical panorama is a very exciting opportunity to visualize the total spherical space around us. Thanks to digital photography

On Google Earth there is a feature (among others) of viewing funny sort of bubble-images made of far away places from almost meter to meter. All these images give a total spherical panorama. Isn’t it fascinating that it might be soon possible to see any place from anywhere anytime for anybody? The fabulous perspective keeps on developing and offering new opportunities in imaging. Nowadays, in a new paradigmatic age, the increasing need for innovative types of images may induce revolutionary solutions – perhaps providing us with a wider view and a deeper insight into more extensive spaces. “We seem to live in an arrogant age. In fact, the idea that there is not much to learn from the past is rather disturbing. In some ways we might say we do know more, but we seem to have forgotten some things that they knew in the past. You could say we still live in a perspective nightmare. The single point of view will always restrict our perceptions. There seems to be a great, big, beautiful world out there, and we are hemmed in Don’t you want to get out, to see a bigger space… a bigger picture? I think we do. Exciting times could be ahead…” (David Hockney: Secret Knowledge) Csaba Szegedi, 2009.

(Altering Ways of Projecting Spaces in Changing Comprehension of Times) 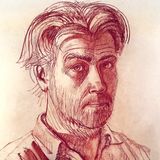