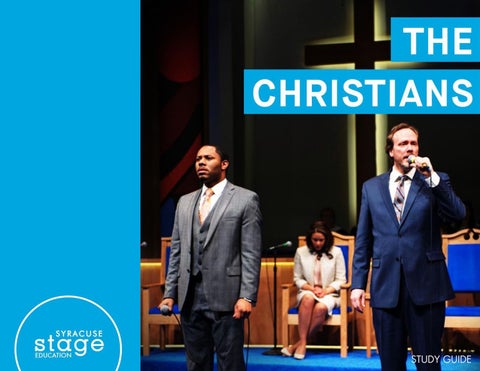 The Christians was Commissioned by and premiered in the 2014 Humana Festival of New American Plays at Actors Theatre of Lousiville. The Christians is presented by special arrangement with Dramatists Play Service, Inc., New York.

audience etiquette BE PROMPT Give your students plenty of time to arrive, find their seats, and get situated. Have them visit the restrooms before the show begins. RESPECT OTHERS Please remind your students that their behavior and responses affect the quality of the performance and the enjoyment of the production for the entire audience. Live theatre means the actors and the audience are in the same room, and just as the audience can see and hear the performers, the performers can see and hear the audience. Please ask your students to avoid disturbing those around them. Please no talking or unnecessary or disruptive movement during the performance. Also, please remind students that cellphones should be switched off completely. No texting or tweeting, please. When students give their full attention to the action on the stage, they will be rewarded with the best performance possible.

As you take your students on the exciting journey into the world of live theatre we hope that youâ&#x20AC;&#x2122;ll take a moment to help prepare them to make the most of their experience. Unlike movies or television, live theatre offers the thrill of unpredictability.

With the actors present on stage, the audience response becomes an integral part of the performance and the overall experience: the more involved and attentive the audience, the better the show. Please remind your students that they play an important part in the success of the performance.

Dear Educator, Live theatre is a place for people to gather and experience the joys, triumphs, and sorrows life has to offer. The Syracuse Stage education department is committed to providing the tools to make learning in and through the arts possible. We seek to address varied learning styles while making connections to curricula and life itself. It is our goal in the education department to maximize the theatre experience for our education partners with experiential learning and in-depth arts programming. Thank you for your interest and support. Sincerely,

2015/2016 EDUCATIONAL OUTREACH SPONSORS Syracuse Stage is committed to providing students with rich theatre experiences that explore and examine what it is to be human. Research shows that children who participate in or are exposed to the arts show higher academic achievement, stronger selfesteem, and improved ability to plan and work toward a future goal. Many students in our community have their first taste of live theatre through Syracuse Stageâ&#x20AC;&#x2122;s outreach programs. Last season more than 15,500 students from across New York State attended or participated in the Bank of America Childrenâ&#x20AC;&#x2122;s Tour, artsEmerging, the Young Playwrights Festival, the Franklin Project, Young Adult Council, and our Student Matinee Program. We gratefully acknowledge the corporations and foundations who support our commitment to in-depth arts education for our comunity.

ucas Hnath, was raised in the American evangelical tradition in Orlando, Florida, his mother is an ordained minister. His work includes Death Tax (2012), A Public reading of an Unproduced Screenplay About the Death of Walt Disney (2013), nightnight (2013), Red Speedo (2013), and Isaac’s Eyes (2012). He has been a resident playwright at New Dramatists since 2011 and teaches at New York University, from which he received his BFA and MFA.

“I like that experience of an audience feeling suspicious of the thing and then having that expectation turned upside down.” Lucas Hnath, in American Theatre, Sept 2014. PHOTO: Above, Lucas Hnath, Playwrights Horizon

SYNOPSIS Pastor Paul has worked hard to bring his church from a storefront to a very large church with a coffee shop in the lobby and a baptismal font the size of a swimming pool. The road has been hard, but thanks to his charisma and the support of the faithful, the church is now out of debt and the pews are full. In a powerful sermon, he expresses a revelation that God has given him: there is no hell. What follows is a series of confrontations with associate pastor Joshua, church elder Jay, a confused congregant, and finally his wife, Elizabeth.

PAUL: I have a powerful urge to communicate with you but I find the distance between us insurmountable.

MEGACHURCHES Pastor Paul’s church can be classified as a megachurch, a relativly new style of religious worship within very large non-denominational and evangelical churches. According to Hartford Seminary’s Hartford Institute for Religious Research, the term megachurch is the name given to a group of very large, Protestant congregations that share several distinctive characteristics. These churches generally have: • 2000 or more persons in attendance at weekly worship, counting adults and children at all worship locations. • A charismatic, authoritative senior minister • A very active 7 day a week congregational community • A multitude of diverse social and outreach ministries • Weekly small group meetings of less than fifty focusing on accountability and relationship building to suppliment the larger weekly worship sessions • Innovative and often contemporary worship format and a complex differentiated organizational structure While we think of megachurches as a largely American phenomenon, the largest are outside of the U.S. Yoido Full Gospel Church in Seoul, South Korea serves 253,000 congregants. The largest American churches include Lakewood Church in Houston, Texas, which has 45,000 weekly attendees and Church of the Highlands in Birmingham, Alabama, with 40,000.

Religious Diversity and Dissidents in America

The front page of one of the written Commonwealth guides by John Elliot, in 1659.

The foundation of the English colonies that became the United States is very much bound to the history of Christian dissidents. New England, an early haven for those who did not adhere to Anglicanism, became known as the “Bible Commonwealths.” Diversity of course didn’t always include tolerance. For example, after American independence, Catholics were still often banned from holding office. Jews were routinely discriminated against, especially after the great waves of immigration in the late 19th and 20th centuries.

Religious Diversity and Dissidents in America The Christians, Lucas Hnath’s “big little play about faith in America” is set in the nave of an American megachurch, with characters speaking at stand-up microphones and backed by a choir, evoking the origins of drama as an expression of religious concerns. Classical Greek drama took place as part of a religious festival, and the first theatres include an altar. Playwright Hnath has said that the model for The Christians is Sophocles’ Antigone, which hinges on a religious question, forcing its ancient audience to ask what the gods really want. Antigone, in order of events the second play in the Oedipus cycle, is organized as a series of arguments and encounters in single setting. After the civil war brought about by Oedipus’ abdication, both his sons, leading opposite sides have been killed. Creon, the new leader of Thebes and the brother of Oedipus’ hapless wife/mother, has declared that the rebellious brother be left unburied. His sister Antigone refuses to accept this, declaring that the gods have decreed that a body must be given the respect of a burial. Creon’s obstinacy leads to tragic consequences. Antigone in front of the dead Polyneices by Nikiforos Lytras

BILLING. I am a pagan and proud of it. Believe me, before long, we will all be pagans. The published play script of The Christians includes an epigrammatic exchange from Henrik Ibsen’s An Enemy of the People, in which the protagonist Dr.Thomas StockMORTEN. And then will we be allowed to mann has a scientific revelation. The waters that feed the spas providing a livelihood do anything we like? for his town have been polluted by runoff from an upstream tannery. Publishing his finding will destroy the economy, but Stockmann stands firm, losing everything he BILLING. Well., you’ll see. cherishes. - Henrick Ibsen Enemy of the People An Enemy of the People program for Théâtre de l’Œuvre, November 1893

• Is Pastor Paul’s story a tragedy? What aspects of tragedy does it share? • How does the onstage church function as a setting for private conversations? Why? • The Christians takes no position on the central question that propels it. What effect does this have?

What is the story line? What happened before the play started? What do the characters want? What do they do to achieve their goals? What do they stand to gain/lose? THEME

elements of design LINE can have length, width, texture, direction, and

Sources and Resources: Lucas Hnath and The Christians: “In The Christians a Schism Over Fire and Brimstone” http://www.nytimes.com/2015/09/18/theater/review-in-the-christians-a-schism-over-fire-and-brimstone. html?ribbon-ad-idx=5&rref=arts&module=Ribbon&version=origin&region=Header&action=click&contentC ollection=Arts&pgtype=article “The Christians Tackles a Schism Among the Flock” http://www.nytimes.com/2015/09/06/theater/lucas-hnaths-the-christians-tackles-a-schism-among-the-flock. html?_r=0 “Church Splits Are Hell. This Play About One Isn’t” http://www.christianitytoday.com/ct/2015/september-web-only/lucas-hnath-christians-church-splits-hell. html?start=1 “Lucas Hnath: Frustration Is the Point” http://www.tcg.org/publications/at/issue/featuredstory.cfm?story=7&indexID=42 Sophocles, Antigone. Available in many translations , adaptations, and video productions. Video: An interview with Lucas Hnath focusing on his play Red Speedo, but giving insight into his working process and goals as a playwright. https://www.youtube.com/watch?v=-JqWGo-Mn2E A short interview focusing on The Christians in process. https://www.youtube.com/watch?v=Kpq-8mLLsUg SYRACUSE STAGE EDUCATION

TO KILL A MOCKINGBIRD

THE SANTALAND DIARIES BY DAVID SEDARIS ADAPTED BY JOE MANTELLO

BY AARON POSNER SORT OF ADAPTED FROM CHEKHOV’S THE SEAGULL

ADAPTED BY CHRISTOPHER SERGEL FROM THE NOVEL BY HARPER LEE

THE CHRISTIANS BY LUCAS HNATH

BASED ON A NOVEL BY ARTHUR CONAN DOYLE

SE AS ON SPONS OR:

Show info: http://syracusestage.org/showinfo.php?id=63 Description: Do you have the courage to change your heart? Pastor Paul is much-loved...

Show info: http://syracusestage.org/showinfo.php?id=63 Description: Do you have the courage to change your heart? Pastor Paul is much-loved...