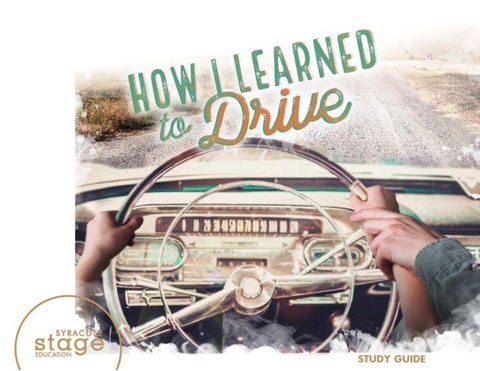 Paul Fouquet, CSA How I Learned to Drive received its world premiere at the Vineyard Theatre, New York City. Off-Broadway production produced by the Vineyard Theatre in association with Daryl Roth and Roy Gabay. This play was made possible by generous support from the Pew Charitable Trust and the John Simon Guggenheim Foundation. It was written and developed at the Perseverance Theatre, Juneau, Alaska, Molly Smith, Artistic Director. How I Learned to Drive is presented by special arrangement with Dramatists Play Service, Inc., New York. April 5 - 23, 2017

audience etiquette BE PROMPT Give your students plenty of time to arrive, find their seats, and get situated. Have them visit the restrooms before the show begins. RESPECT OTHERS Please remind your students that their behavior and responses affect the quality of the performance and the enjoyment of the production for the entire audience. Live theatre means the actors and the audience are in the same room, and just as the audience can see and hear the performers, the performers can see and hear the audience. Please ask your students to avoid disturbing those around them. Please no talking or unnecessary or disruptive movement during the performance. Also, please remind students that cellphones should be switched off completely. No texting or tweeting, please. When students give their full attention to the action on the stage, they will be rewarded with the best performance possible.

As you take your students on the exciting journey into the world of live theatre we hope that youâ&#x20AC;&#x2122;ll take a moment to help prepare them to make the most of their experience. Unlike movies or television, live theatre offers the thrill of unpredictability.

With the actors present on stage, the audience response becomes an integral part of the performance and the overall experience: the more involved and attentive the audience, the better the show. Please remind your students that they play an important part in the success of the performance.

Dear Educator, Live theatre is a place for people to gather and experience the joys, triumphs, and sorrows life has to offer. The Syracuse Stage education department is committed to providing the tools to make learning in and through the arts possible to address varied learning styles and to make connections to curricula and life itself. It is our goal in the education department to maximize the theatre experience for our education partners with experiential learning and in-depth arts programming. Thank you for your interest and support. Sincerely,

2016/2017 EDUCATIONAL OUTREACH SPONSORS Syracuse Stage is committed to providing students with rich theatre experiences that explore and examine what it is to be human. Research shows that children who participate in or are exposed to the arts show higher academic achievement, stronger self-esteem, and improved ability to plan and work toward a future goal. Many students in our community have their first taste of live theatre through Syracuse Stageâ&#x20AC;&#x2122;s outreach programs. Last season more than 15,500 students from across New York State attended or participated in the Bank of America Childrenâ&#x20AC;&#x2122;s Tour, artsEmerging, the Young Playwrights Festival, the Franklin Project, Young Adult Council, and our Student Matinee Program. We gratefully acknowledge the corporations and foundations who support our commitment to in-depth arts education for our comunity.

TCG residency award, a Guggenheim, a Pew Charitable Trust Award, and fellowships and residencies at Sundance Theatre Lab, Hedgebrook, The Rockefeller Center’s Bellagio Center,Yaddo, MacDowell, and the Bunting. But she is particularly proud of her Thirtini Award from 13P, and honored by three awards in her name: the Paula Vogel Award for playwrights given by Vineyard Theatre, the Paula Vogel Award from the American College Theatre Festival, and the Paula Vogel mentorship program, curated by Quiara Hudes and Young Playwrights of Philadelphia. From: http://paulavogelplaywright.com/

The Cleveland Play House, How I Learned to Drive, Photo by Roger Mastroianni

Uncle Peck - her auntâ&#x20AC;&#x2122;s husband. An attracThe Greek Chorus - three actors who play tive man in his forties, he appears to be a model all the subsidiary characters, including Mother, father figure. Grandmother, Aunt Mary, Grandfather, classmates, a waiter, and a teenage boy.

SYNOPSIS “Sometimes to tell a secret, you first have to teach a lesson,” confides Li’l Bit in the opening moments of How I Learned to Drive. We first meet her as an adult, but she soon guides us through a series of vignettes from her childhood and adolescence that help us and Li’l Bit herself understand how she became the woman she is. Using the framework of driving lessons she took from her aunt’s husband, Uncle Peck, we soon learn that Li’l Bit is a victim of long-term sexual abuse. Uncle Peck is seductive and manipulative, but also an appealing figure for the young Li’l Bit, who is unsure of her place in the world and in her insensitive family, which assigns humiliating nicknames to its members. His character is meant to confuse us. He appears gentle, loving, and a bit pathetic, but beneath the surface, he is a classic predator. In scenes punctuated by dark comedy, we see Li’l Bit as she maneuvers through the uncomfortable landmarks of adolescence: a sock hop where she is afraid to dance because the boys will see her jiggle, gym class where she’s taunted by her classmates, uncomfortable family gatherings, and the increasingly chilling driving lessons from Uncle Peck. In a New York Times interview in 1997, Paula Vogel said that she wanted this play “to get the audience to go along for a ride they wouldn’t ordinarily take, or even know they’re taking”. It moves as seductively as Uncle Peck, sliding from the comic into darker, more uncomfortable places, exposing patterns of guilt and responsibility with discomforting shifts of power.

“The nearest sensation I feel - of flight in the body - I guess I feel when I’m driving.” -How I Learned to Drive 8

Style In How I Learned to Drive, Li’l Bit’s reminiscences are fragmented and presented out of chronologicalsequence. Along with her, we are putting together a puzzle. In examining each piece of her relationship with Uncle Peck, we get a picture of how sexual predators operate and how they continue to destroy lives long after their deeds are done.

In How I Learned to Drive, realistic scenes and situations play out on a non-realistic stage set representing a landscape of memories. The voice of instructional manuals and the educational films of Li’l Bit’s youth often punctuate the action. The controlling metaphor is driver education and the voices often sound like the bland narration of driver’s ed films from the twentieth century.

All supporting characters in How I Learned to Drive are played by three actors who Paula Vogel calls a Greek Chorus. They move from role to role while Li’l Bit and Uncle Peck stay in sharp focus, the only two characters maintaining one identity. Like the classical Greek Chorus, they are the voices of the community in which Li’l Bit lives.

What is the story line? What happened before the play started? What do the characters want? What do they do to achieve their goals? What do they stand to gain/lose? THEME

elements of design LINE can have length, width, texture, direction, and

How I Learned to Drive Study Guide

How I Learned to Drive Study Guide