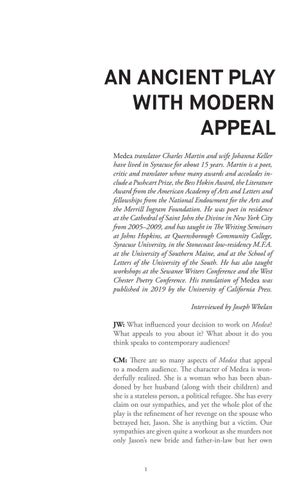 AN ANCIENT PLAY WITH MODERN APPEAL Medea translator Charles Martin and wife Johanna Keller have lived in Syracuse for about 15 years. Martin is a poet, critic and translator whose many awards and accolades include a Pushcart Prize, the Bess Hokin Award, the Literature Award from the American Academy of Arts and Letters and fellowships from the National Endowment for the Arts and the Merrill Ingram Foundation. He was poet in residence at the Cathedral of Saint John the Divine in New York City from 2005â&#x20AC;&#x201C;2009, and has taught in The Writing Seminars at Johns Hopkins, at Queensborough Community College, Syracuse University, in the Stonecoast low-residency M.F.A. at the University of Southern Maine, and at the School of Letters of the University of the South. He has also taught workshops at the Sewanee Writers Conference and the West Chester Poetry Conference. His translation of Medea was published in 2019 by the University of California Press. Interviewed by Joseph Whelan JW: What influenced your decision to work on Medea? What appeals to you about it? What about it do you think speaks to contemporary audiences? CM: There are so many aspects of Medea that appeal to a modern audience. The character of Medea is wonderfully realized. She is a woman who has been abandoned by her husband (along with their children) and she is a stateless person, a political refugee. She has every claim on our sympathies, and yet the whole plot of the play is the refinement of her revenge on the spouse who betrayed her, Jason. She is anything but a victim. Our sympathies are given quite a workout as she murders not only Jasonâ&#x20AC;&#x2122;s new bride and father-in-law but her own