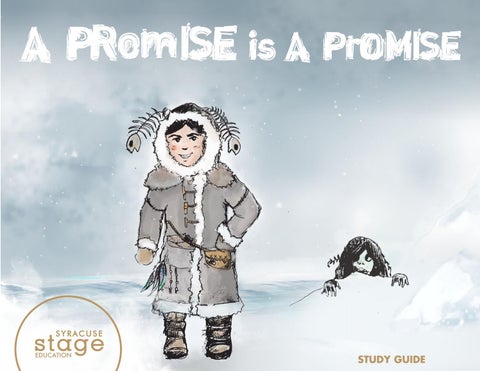 A PRomISE is A P rOMISE

audience etiquette BE PROMPT Give your students plenty of time to arrive, find their seats, and get situated. Have them visit the restrooms before the show begins! RESPECT OTHERS Please remind your students that their behavior and responses affect the quality of the performance and the enjoyment of the production for the entire audience. Live theatre means the actors and the audience are in the same room, and just as the audience can see and hear the performers, the performers can see and hear the audience. Please ask your students to avoid disturbing those around them. Please no talking or unnecessary or disruptive movement during the performance. Also, please remind students that cellphones should be switched completely off. No texting or tweeting, please. When students give their full attention to the action on the stage, they will be rewarded with the best performance possible.

As you take your students on the exciting journey into the world of live theatre we hope that you’ll take a moment to help prepare them to make the most of their experience. Unlike movies or television, live theatre offers the thrill of unpredictability.

With the actors present on stage, the audience response becomes an integral part of the performance and the overall experience: the more involved and attentive the audience, the better the show. Please remind your students that they play an important part in the success of the performance!

Dear Educator, Live theatre is a place for people to gather and experience the joys, triumphs, and sorrows life has to offer. The Syracuse Stage Education Department is committed to providing the tools to make learning in and through the arts possible to address varied learning styles and to make connections to curriculum and life itself. It is our goal in the education department to maximize the theatre experience for our education partners with experiential learning and in-depth arts programming. Thank you for your interest and support! Sincerely,

yracuse Stage is committed to providing students with rich theatre experiences that explore and examine what it is to be human. Research shows that children who participate in or are exposed to the arts show higher academic achievement, stronger selfesteem, and improved ability to plan and work toward a future goal. Many students in our community have their first taste of live theatre through Syracuse Stage’s outreach programs. Last season more than 15,500 students from across New York State attended or participated in the Bank of America Children’s Tour, artsEmerging, the Young Playwrights Festival, the Franklin Project, Young Adult Council, and our Student Matinee Program. We gratefully acknowledge the corporations and foundations who support our commitment to in-depth arts education for our comunity.

ABOUT THE PLAY SYNOPSIS

Daily Life GEOGRAPHY & CLIMATE The Inuit people live in the artic and subartic climates in the Canadian province of Nanavut. Allushua’s family lives in this area, along the Hudson Bay. The Inuit people also live in parts of Greenland and Alaska. The temperatures where the Inuit live are very cold, with frigid winters dipping to -40 degrees Fahrenheit on average. The summers are short with cool to moderate temperatures. Because of this climate, the Inuit have been unable to rely on agriculture. Instead, they have historically been hunters and gatherers with communities traveling between locations based on the season and availability of game. The climate where the Inuit make their homes affects many aspects of their lives and culture.

CLOTHING Traditional Inuit clothing needed to provide both protection against extremely cold and wet conditions while also being sustainably made in locations with few resrouces. The Inuit skillfully made waterproof footwear and clothing from the skins of animals they used for food. Women carried their small children on their backs, requireing more material in the back to cover the infants and small children as they were carried. This is called an Amauti. Women’s clothing was often more adorned than men’s. Many different designs were created created by sewing different colors of fur together. Many Inuit continue to wear traditional clothes.

TRANSPORTATION & DWELLINGS Like their clothing, Inuit homes, boats, and sleds were made of things found in their enviornment. Boats and sleds were covered in animal skins. As groups traveled based on the location of game, there were winter and summer dwelling styles. Summer dwellings were either skin tents or sod homes. Winter dwellings were most often made of packed snow, though if the snow wasn’t suitable skin tents were used.

Language and Culture ORAL TRADITION The story of the Qallupilluit is part of the Inuit oral tradition. Stories, ideas, and religious beliefs were passed down from generation to generation through spoken word. Until very recently, the language the Inuit speak, Inuktitut, was a completely spoken language with no written component. In order to pass down the knowledge of the generations, a rich array of stories are told. Stories similar to the ones about the Qallupiluit were cautionary. The Inuit created the story of the Qallupiluit to protect their children from venturing too close to the cracks in the sea ice, which can quickly expand creating a danger of falling into the sea.

THROAT SINGING Inuit throat singing was traditionally performed by two women as a friendly competition and game. The leader sets the tone and pace and the second person follows with the same or similar sounds half a second behind. The pair holds onto each other’s arms, making a sawing motion or swaying back and forth. The person who outlasts the other or does not laugh is declared the winner. The sounds heard in throat singing often mimic the noises of the natural world around the singers, such as imitating the sound of sea birds. This game helped to entertain children and women who stayed at home while men hunted. Throat singing is making a resurgence with two 11-year-old girls performing throat singing at the Canadian Prime Minister Justin Trudeau’s swearing in ceremony. See a video here- https://www.youtube.com/watch?v=ZBg1vfe8P1g

THE SPIRIT OF ALL THINGS Traditional Inuit beliefs are a form of animism, according to which all objects and living things or beings have a spirit.The belief is that all things happen through the involvement of some spirit. Spirits can affect people’s lives and can be controlled by magical charms and talismans. Various taboos were observed to make sure that animal spirits were not offended, and when animals were killed for food, certain rituals were observed. Communal rites centered on preparation for the hunt, as this was the most important activity for survival in a hostile environment.

Traditional Inuit games help to build community and friendship while also building physical strength and agility. Being stronger and fitter helped you be a better hunter, and the games could help cheer spirits when times were tough. Both of these were necessities of living in a harsh environment.

Can your students think of other games that are similar? What traditions cross cultural and geographic boundaries?

Kneel Jump Starting on your knees, jump forward onto your feet trying to go as far as you can. The person who jumps the further distance wins. One Foot High Kick Have one person hold a pole with a ball on a string hanging off the end. Have this person hold the stick so that the ball is just above waist high. The person kicking starts on two feet and jumps up, kicking the ball with one foot and landing balanced on the same foot that kicked the ball. SYRACUSE STAGE EDUCATION

What is the story line? What happened before the play started? What does each character want? What do they do to achieve their goals? What do they stand to gain/lose? THEME

elements of design LINE can have length, width, texture, direction and

Have students respond in small groups or conduct a group discussion based on questions such as:

Students can respond verbally or in writing to questions such as:

• Why did the playwright use songs in the play? What does the music bring to the story? • Was the play funny or serious? How did that affect the story? • How did the actors use movement and voice to create their characters? • The designers made many choices when they created the set and costumes for A Promise is a Promise. What did their designs add?

• How would you describe each character in this play to someone who has not seen it? • How did each of them change during the play? • What parts of the play are specfic to where the charaters live? Could this story take place where you live? Why or why not? • What does Allashua learn about keeping promises? Why are promises important? What would you say to Allashua if she told you she planned to go down to the sea ice?

Writing a Review After students have outlined the story and discussed the production elements, they can write reviews. Have them read their reviews aloud or post them online for other classes to read and respond. Reviews usually include the following: a brief summary of the story comments on the quality of the play itself a description of the costumes and set and a comment on whether these were interesting and appropriate • comments on the actors’ character portrayals and on the director’s skill at pulling the whole thing together • • •

The Rag and Bone study guide for A Promise is a Promise https://www.ragandbone.ca/PDFs/promise_guide.pdf

A promise is a promise

A promise is a promise